The cold of an Ottawa winter can be literally bone-chilling. Minus 20C (-4F) is a temperature beyond knowing of most Australians, but it's a relatively common thermometer reading from December to March in Ontario. In the ten years I lived there, the lowest I saw was -35C (-31F). I think I stayed inside that day. However, you do learn to cope with such low temperatures and when combined with the snow and ice that can accumulate, it does make for another layer of creativity in photography.

The seasonal conditions also provide two distinct lighting conditions not often encountered at other times of the year. There's the days when the sky is a bright, crystalline blue without a cloud to be seen. Other days may be completely flat and toneless; basically a living black and white landscape with just tones of grey broken by splashes of bright colour. Here's but one example at Brown's Inlet in the Glebe, Ottawa from December, 2009. Admittedly, I did remove what little colour remained in this image, apart from that vibrant yellow of the chairs. 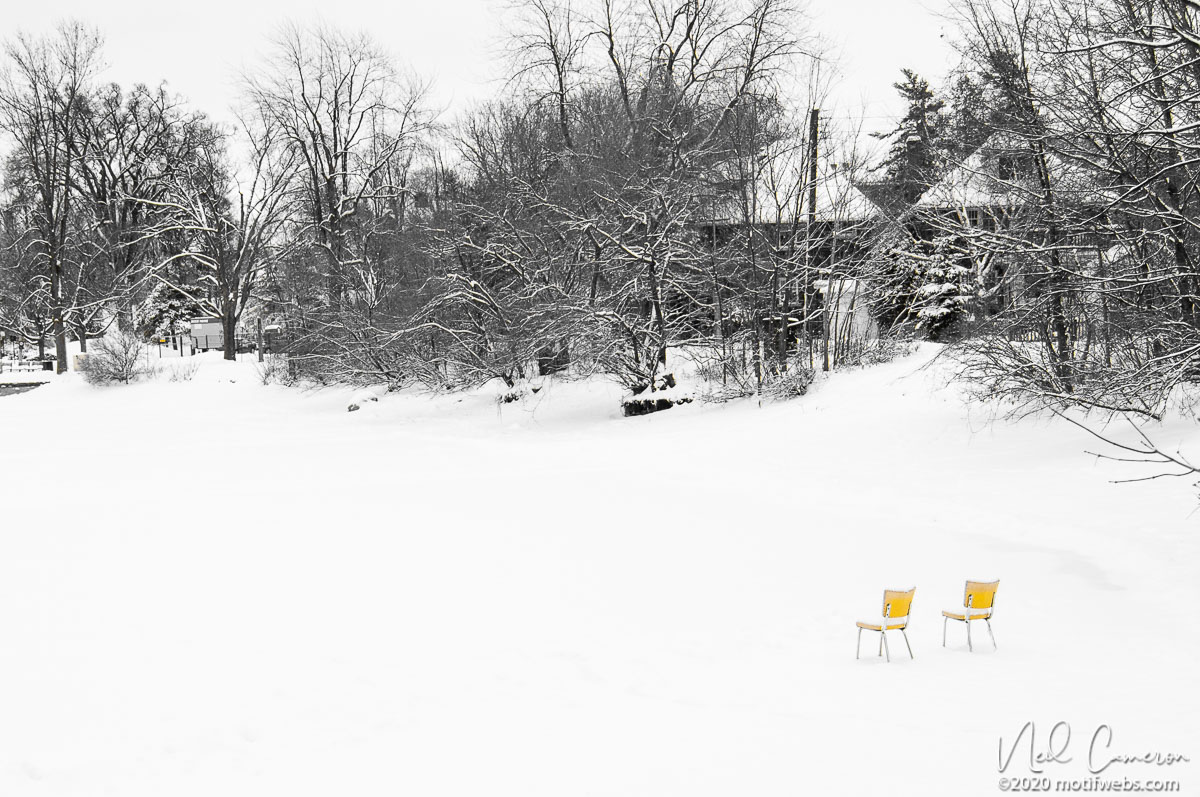 Here is another, of skaters on the frozen Rideau River that each winter is turned into what is billed as "The world's largest skateway" at 7.8km long. I could have sworn it was billed as the world's longest when I lived there, but suspected that there were longer ones in the Netherlands. However I digress, this time I did take the colour completely out and turned the image into a black and white colour-space. To my mind, the flat light strongly suggested such an approach 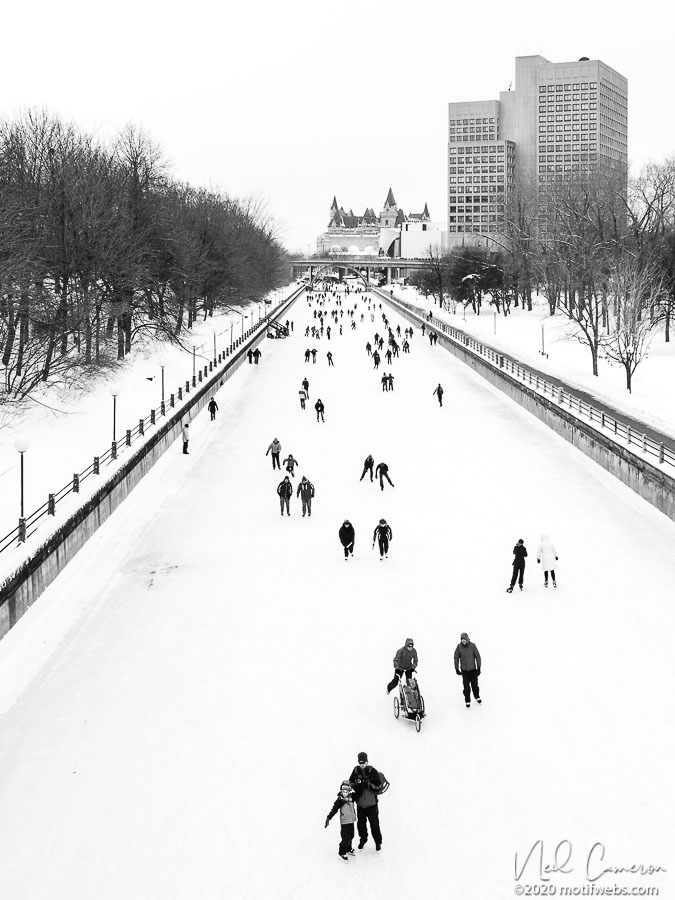 Skaters on the Rideau Canal, January 2012

Ahhh, but those bright blue, much colder days... You can wake up one morning and find abstract icicles handing from the eaves. They are formed when ice or snow is melted by the sun (or a poorly insulated roof) and the water refreezes as it drips off the eave or gutter and is exposed to the cold air. 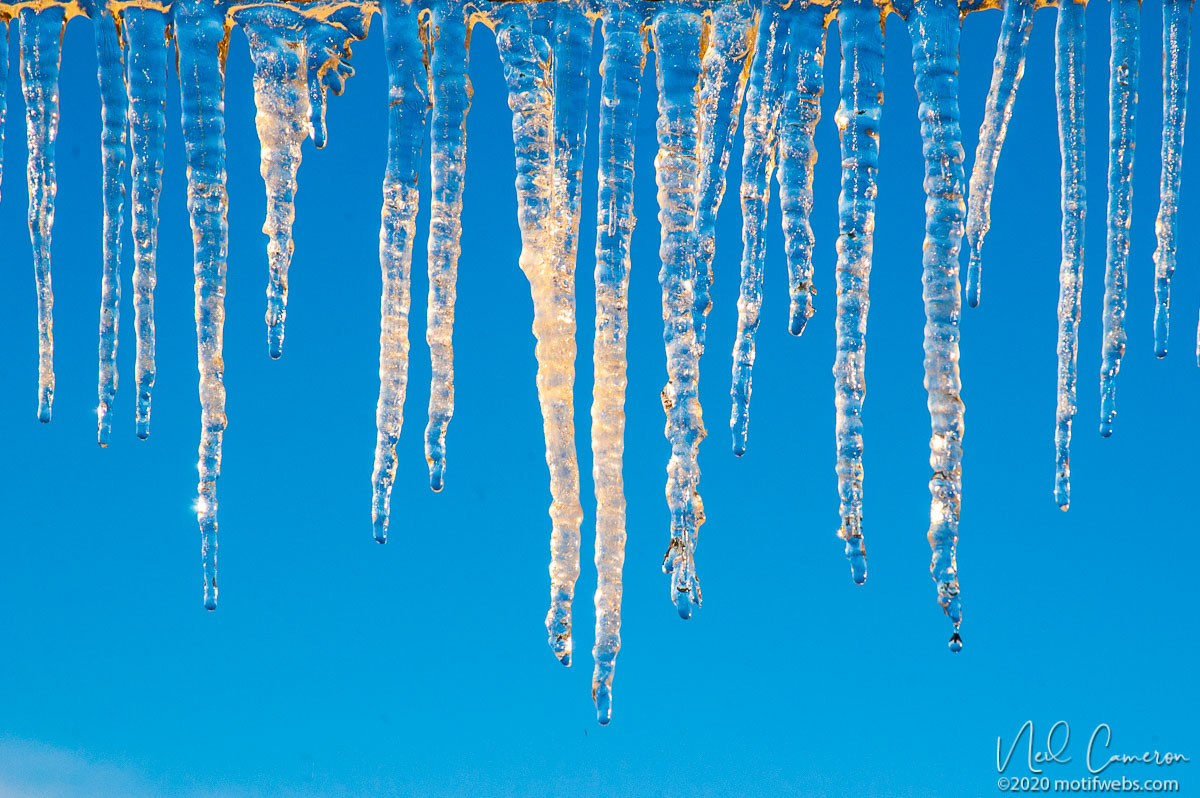 Continuing the theme of the bright blues, there is the aftermath of snow and/or ice storms where the entire world has changed.

When the ice storm is then finished up with a snowfall, it can create another set of photographic possibilities, including providing a gorgeous frame for a Black-capped Chickadee (Poecile atricapillus) at Mud Lake back in January, 2008. 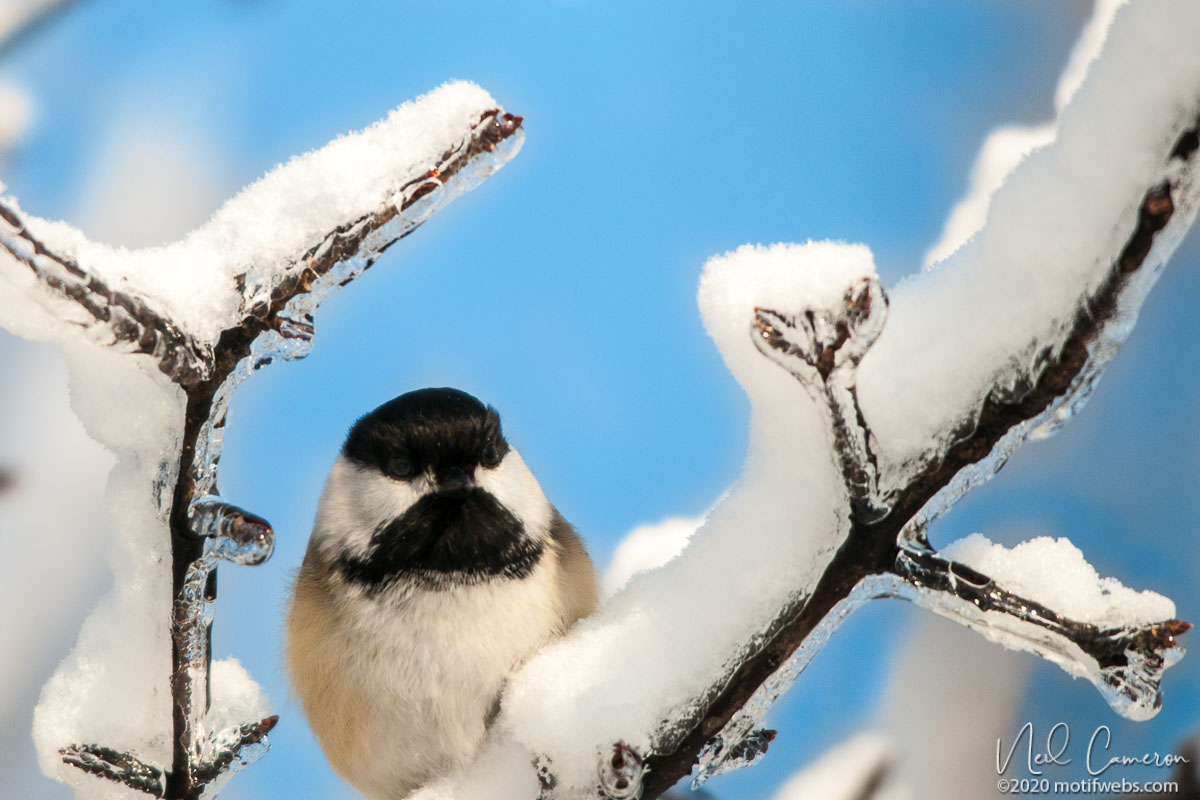 Even without the ice, the heavy snowfalls can obviously provide their own creative additions to images. These cherries, leftover from summer, were taken on the same walk as the yellow chairs above, 15 December, 2009. Sometimes it's the small things that can be visually striking. 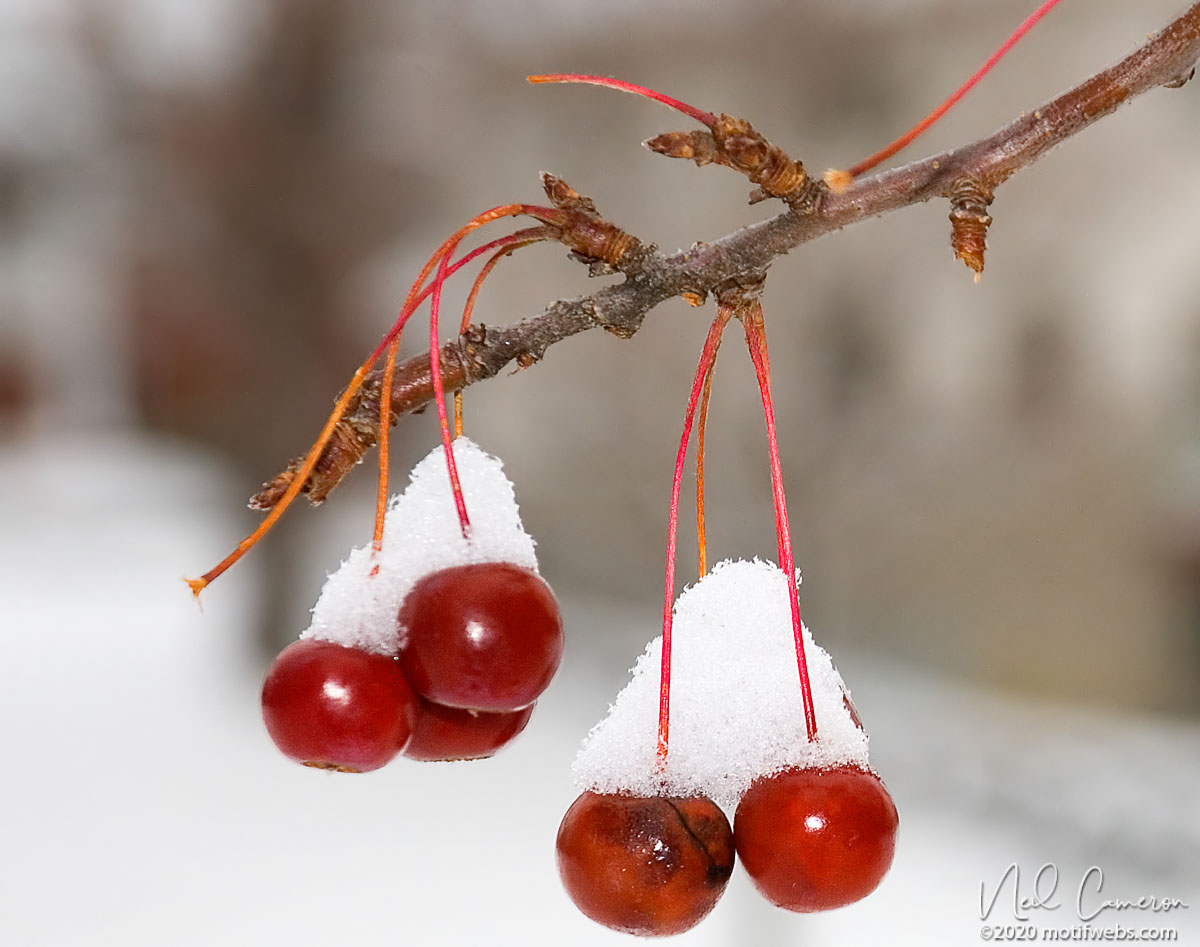 By the same token, this small bush is almost obliterated by the snow at Mud Lake in 2012 and returns us to that flat light/black and white theme. 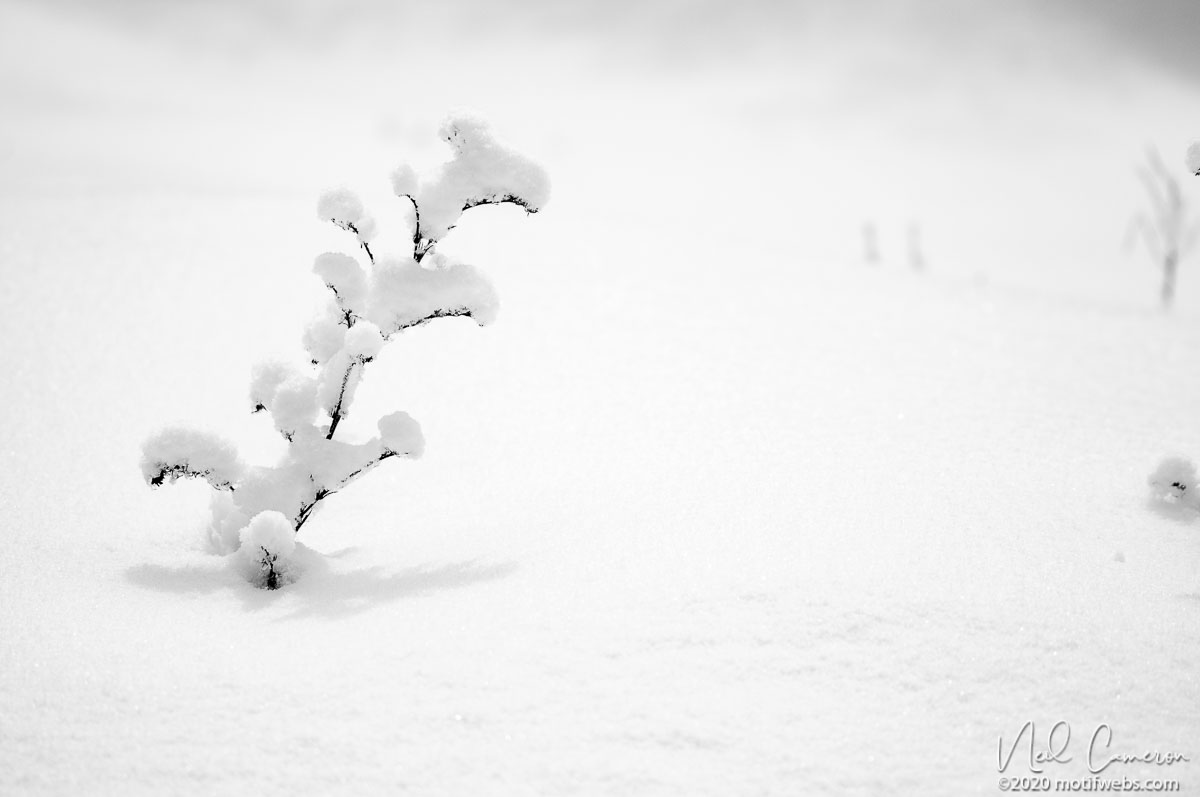 The above image also takes a step towards the abstract, a theme that is also aided and abetted by a Canada winter. I particularly like this one of aspens at Fletcher Wildlife Garden from November 2007. It reminds me a little of an artwork famous in Australia, Jackson Pollock's "Blue Poles". 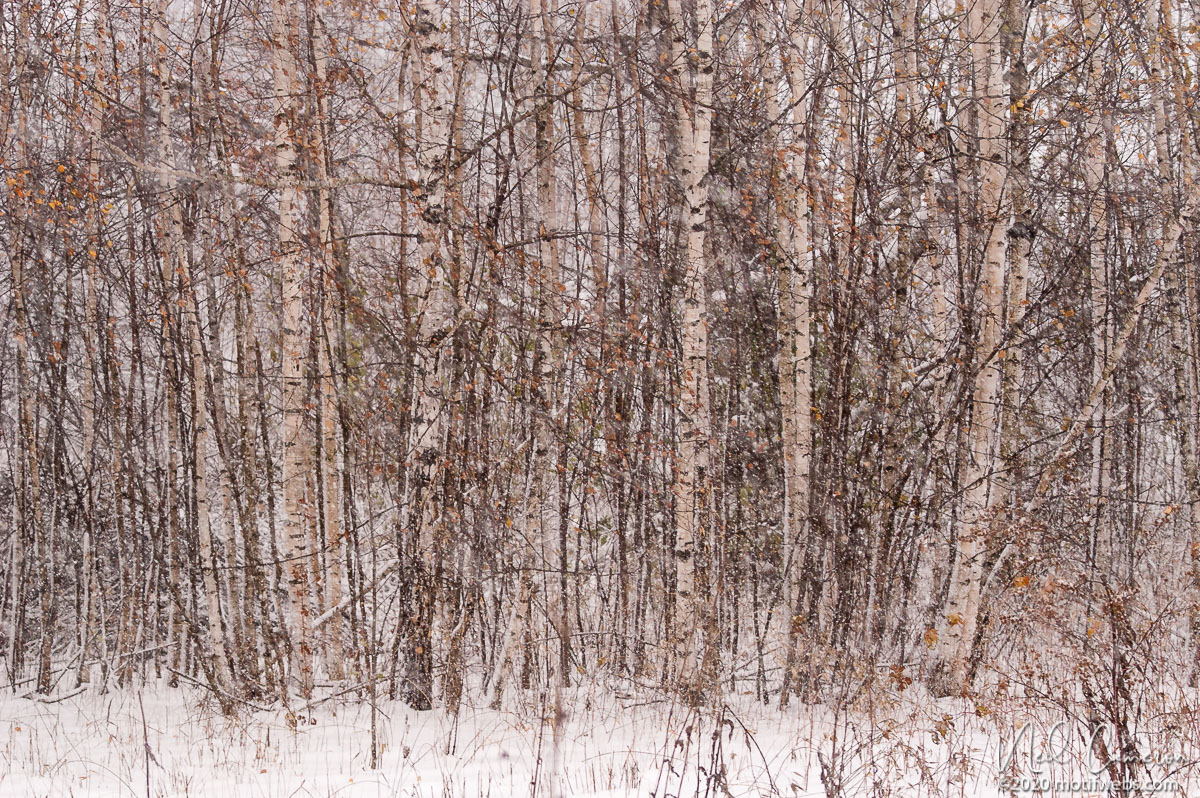 Aspens in the snow, Ottawa

To take the abstraction of an image even further, adding something physical while taking the photograph can give interesting results as well. Here at Hogs Back Falls, during a heavy snowfall, I added in some camera movement. 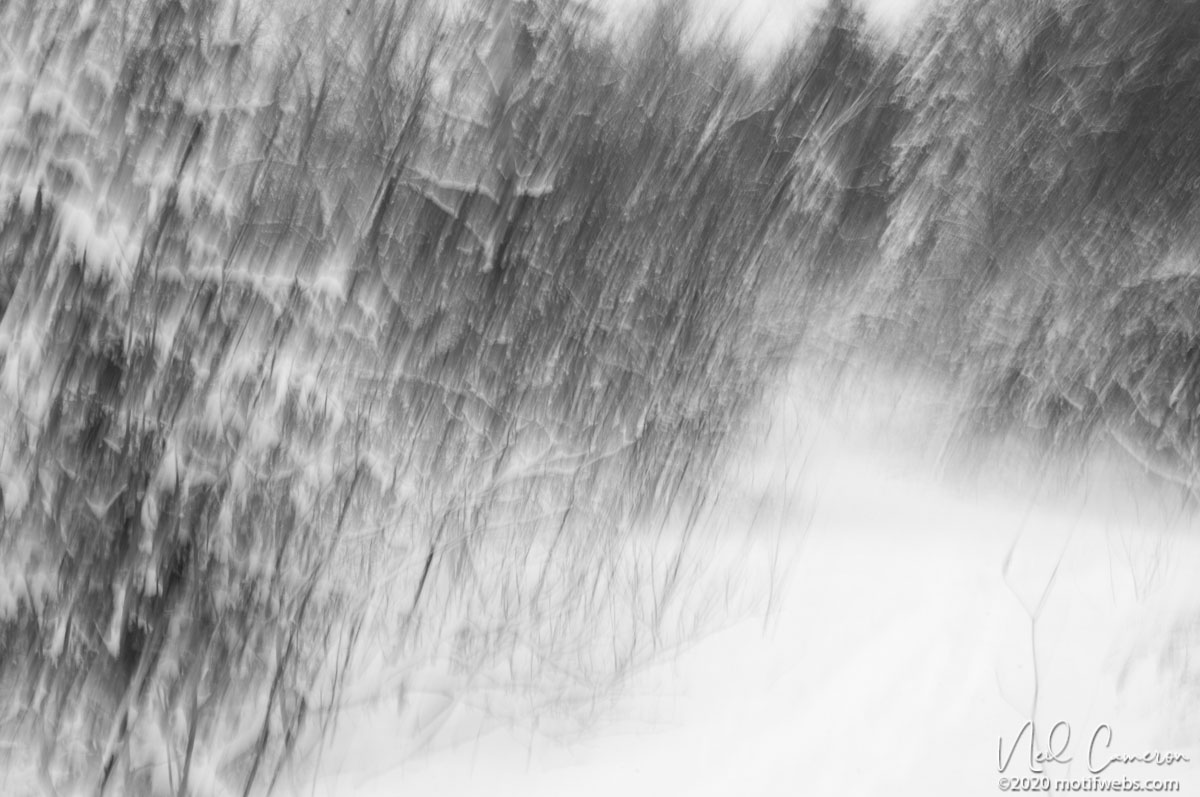 Finally, and while we already touched on it with the Chickadee image earlier, there is the joy of photographing wildlife in the snowy conditions. In some cases, the animals have adapted to an extent that they change with the seasons. Here is an image of an aptly named Snowshoe Hare (Lepus americanus), at Shirleys Bay in December 2007. They are one of those animals that don a white coat for winter and you can see this one has almost completely transitioned from its brown summer regalia. The image also shows the huge paws that help it get around on top of the soft snow that can often prevail. 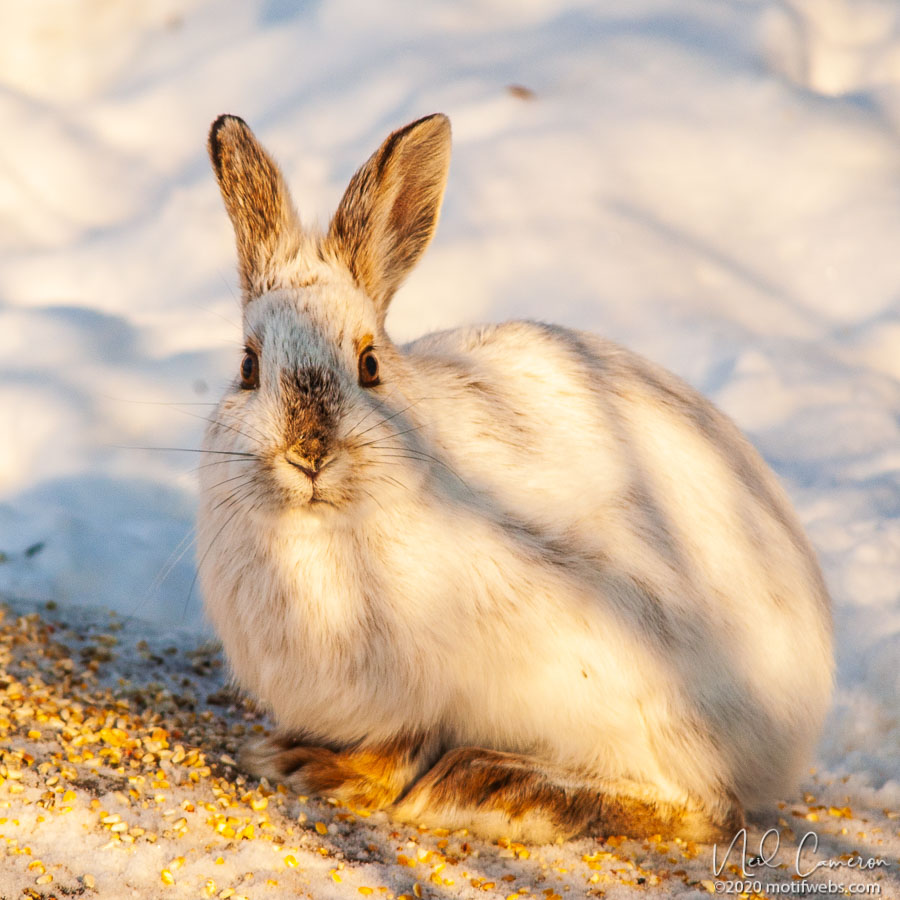 And sometimes the Canada Geese (Branta canadensis) can be a bit late leaving for the warmer climes down south and end up sitting on a solidly frozen Dows Lake, while watching their mates fly by. 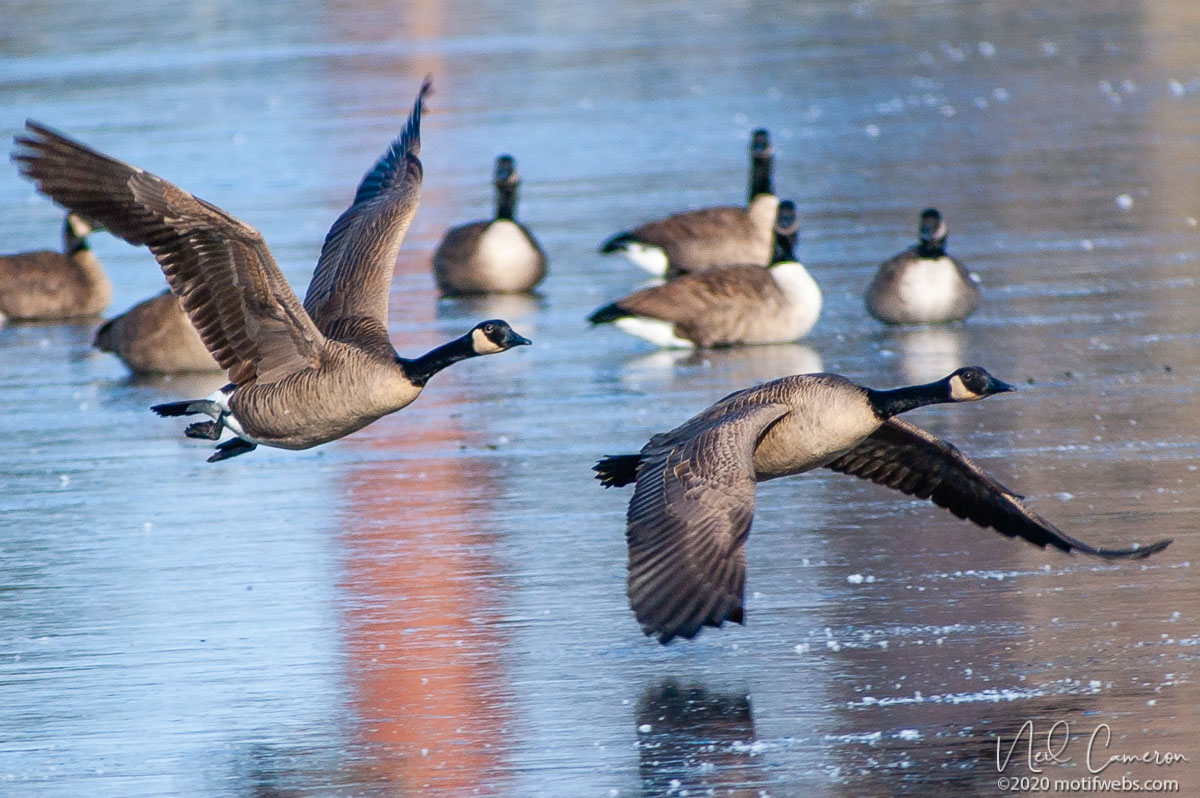 For those of you who have seen this long, photo-heavy post through to its conclusion, myself and this White-tailed Deer (Odocoileus virginianus), also at Shirleys Bay, but this time in January 2010 would like to thank you for your patience and perseverance. Let me know what you think of the result. 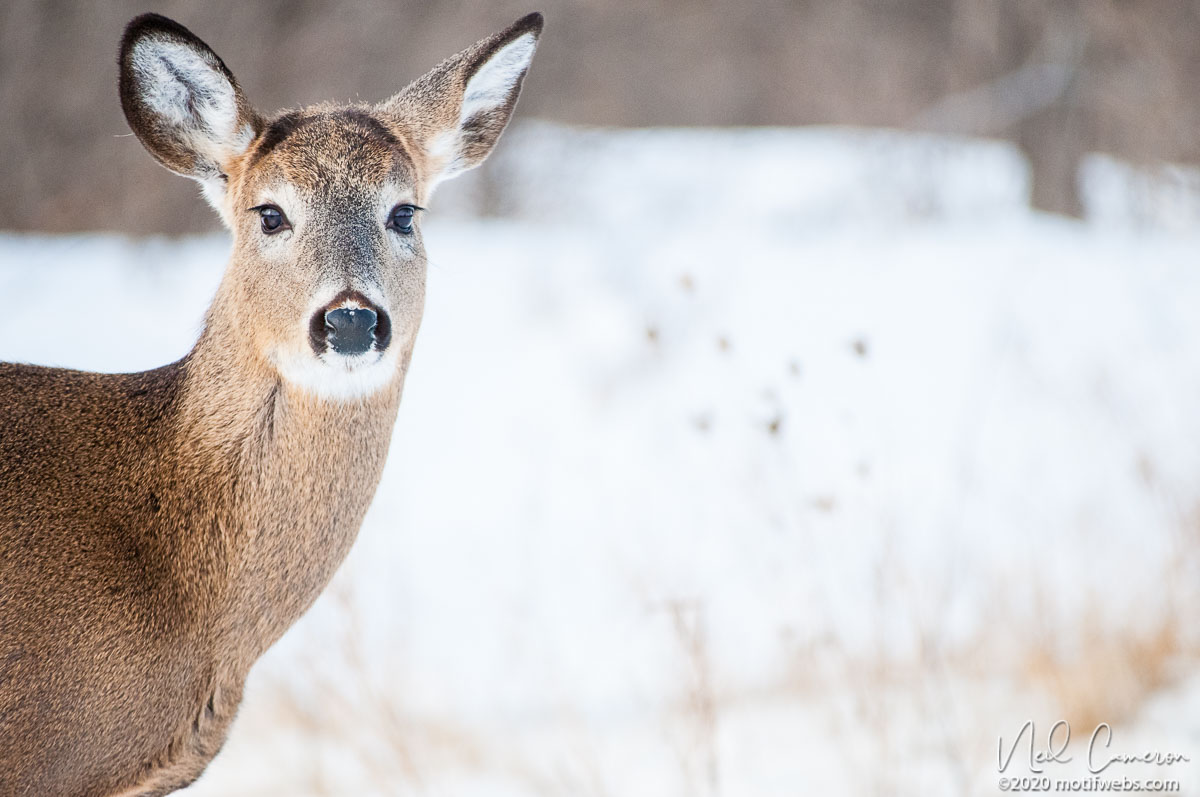