This time with a hat!

More birds, including all three varieties of fairywrens, and at least one more lifer. Some more scenic shots as well. I didn't complete the route, but I'd still call it successful.

As the lede says, this time with a hat! No there will not be any pictures of me in said hat. As I have said many, many times, there are good reasons for remaining behind the camera. Not the least of which is not offending those of a delicate disposition or sensitive digestions.

Nor was it just headwear where I made changes to the equipment I would carry this time. I also went with a significantly lighter photo rig. I swapped out the 300mm f/2.8 lens, which together with the 2x teleconverter gave an effective 600mm f/5.6 focal length, for a 70-200mm f/2.8 zoom lens. This, again with the 2x teleconverter, gave an effective 400mm f/5.6 at full zoom. I should explain that the f-stop drops from f/2.8 to f/5.6 with both lenses as a result of the teleconverter letting in less light to the tune of one "stop". (See here for a full explanation of f-stop - opens in new tab.) I hoped that this setup would pay dividends in allowing me to capture some more flight shots, together with it being much lighter and thus causing less fatigue.

I also took my Nikon 24-120mm f/4 lens along with the intention of shooting some landscapes should the opportunity present itself. As it turned out there were a couple of pleasant scenes available; one being particularly pleasing.

So at about 10:00 am on 7 October, I again set out from where I parked intending to do the entire length of the trail - 2.9km one-way, therefore 5.8km total. Sadly, I again failed, but I did get further than I achieved on 26 September and I didn't suffer sunburn or heat stroke this time. Oh and I sensibly also took some water this jaunt. Don't worry though, I'll try not to let being sensible become too much of a habit.

Anyway, onto sights seen on this cloudy day.

Overcast days like this can be both a benefit and a bane. Of benefit is that the softer light means less harsh, distinct shadows that can make shooting subjects like birds on the ground so difficult. However, the disadvantage is that shooting things like birds in flight (aka BiF) can be problematic as there is a harsh contrast created. Getting the bird lit correctly in an image will result in a bright, near-white sky. If this isn't done, however, then you simply end up with a black silhouette of a bird; a silhouette that if lightened/brightened in post-processing becomes a mess of noisy, ugly grain.

Such was the issue with the first bird I photographed this time out. This Brown Goshawk (Accipiter fasciatus) was difficult to identify, especially given it often strongly resembles or is confused with its near-relative, the Collared Sparrowhawk (A. cirrhocephalus). I was able to identify this as the Goshawk based on the tail shape in flight being more pointed than a Sparrowhawk. However, this is possibly the best image I was able to rescue after post-processing and cleaning the noise up as best I was able. The image is also significantly cropped. 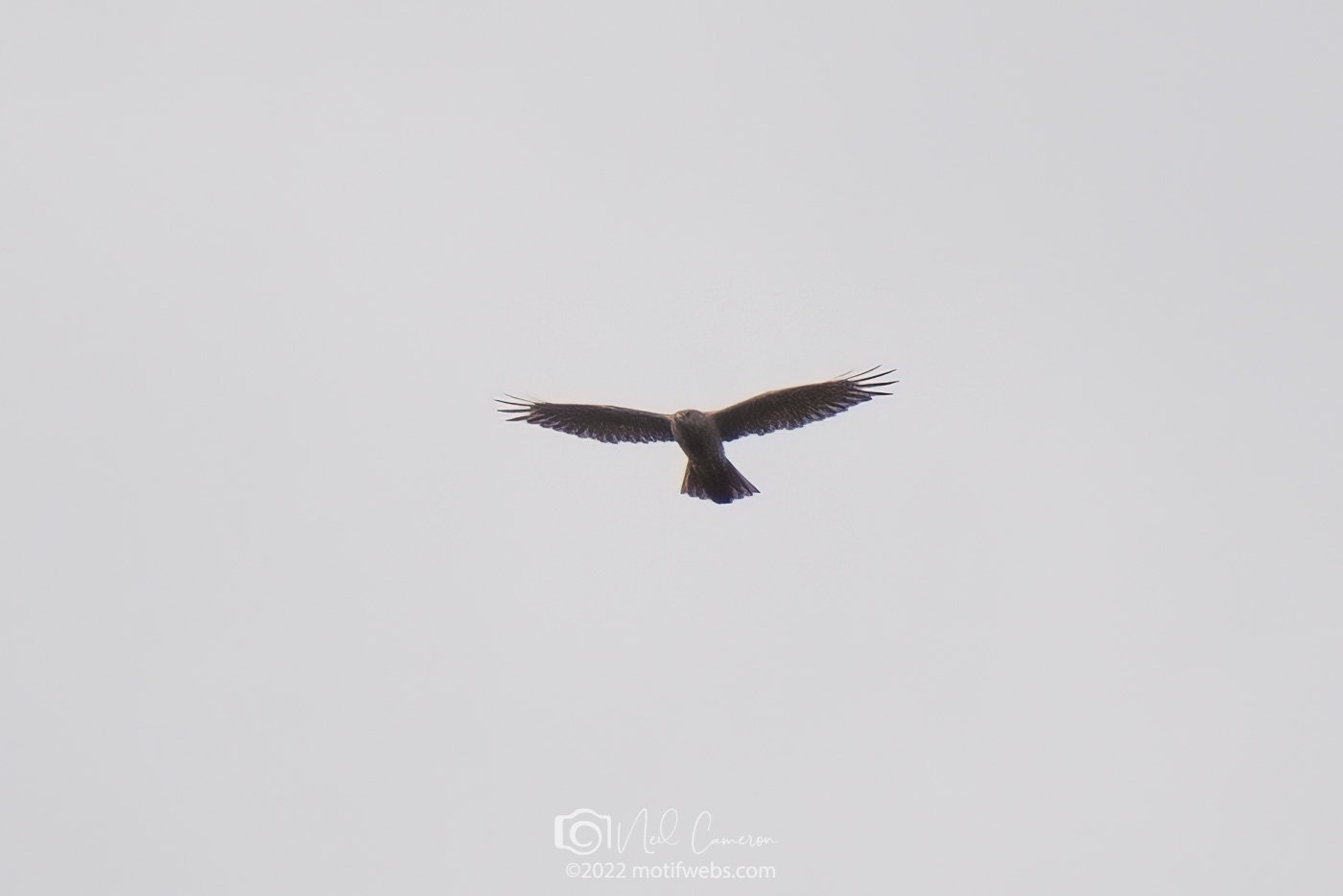 Brown Goshawk in flight. Note the squarish tail which becomes even more pointed in active flight.

I was also both aided and hindered in such shots by my choice of the shorter, lighter lens setup used on this hike. The shorter focal effective focal length of 400mm at full zoom, together with the ability to zoom out even further to a minimum of 140mm, helped keep the BiF in frame.

However, the downside was also significant! The bird was much smaller in the image and a lot of cropping was required; something that when done to the extent needed, made the noise mentioned early more obvious and greatly impaired the final image's quality. Really, I have posted the image above purely to demonstrate those points.

While photographing the Goshawk, I noticed 5 or so birds land high in a nearby eucalyptus. Again the disadvantage of birding with a shorter lens manifested itself as these were also a species that I could not identify until I returned home and could zoom in easily in Lightroom.

It turned out that they were Black-faced Cuckooshrikes (Coracina novaehollandiae) and I managed to get a couple of usable in-flight shots such as this one: 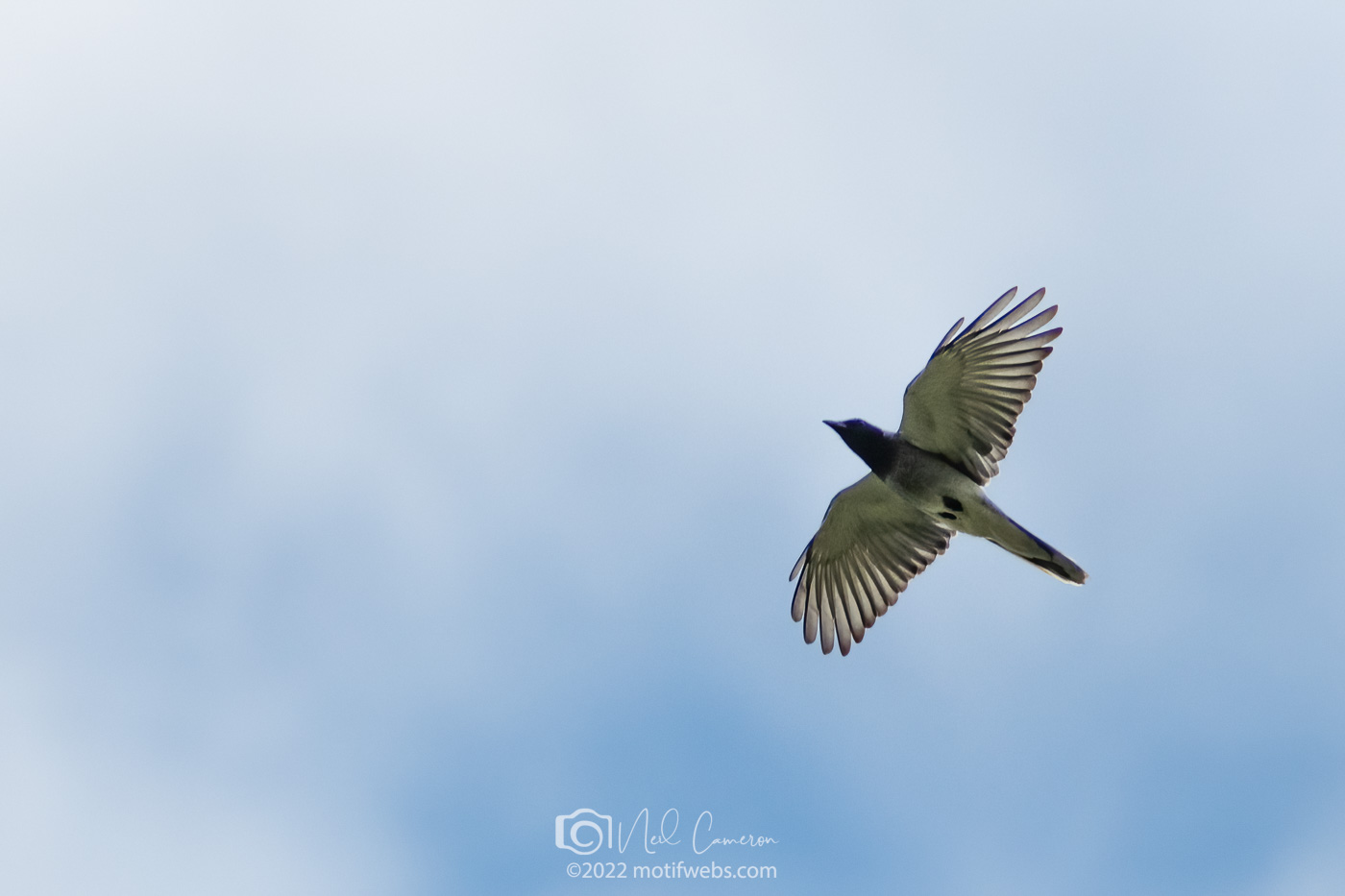 However, rather than take you through a ponderous verbose journey of missed images, let's talk about the shots I did get; the ones I am pleased with.

Actually, there is one other bird-in-flight shot that I managed to rescue after the fact in Lightroom. It turned out better than expected and is an image of one of my favourite (admittedly a long, long list) raptors, an immature White-bellied Sea Eagle (Haliaeetus leucogaster). 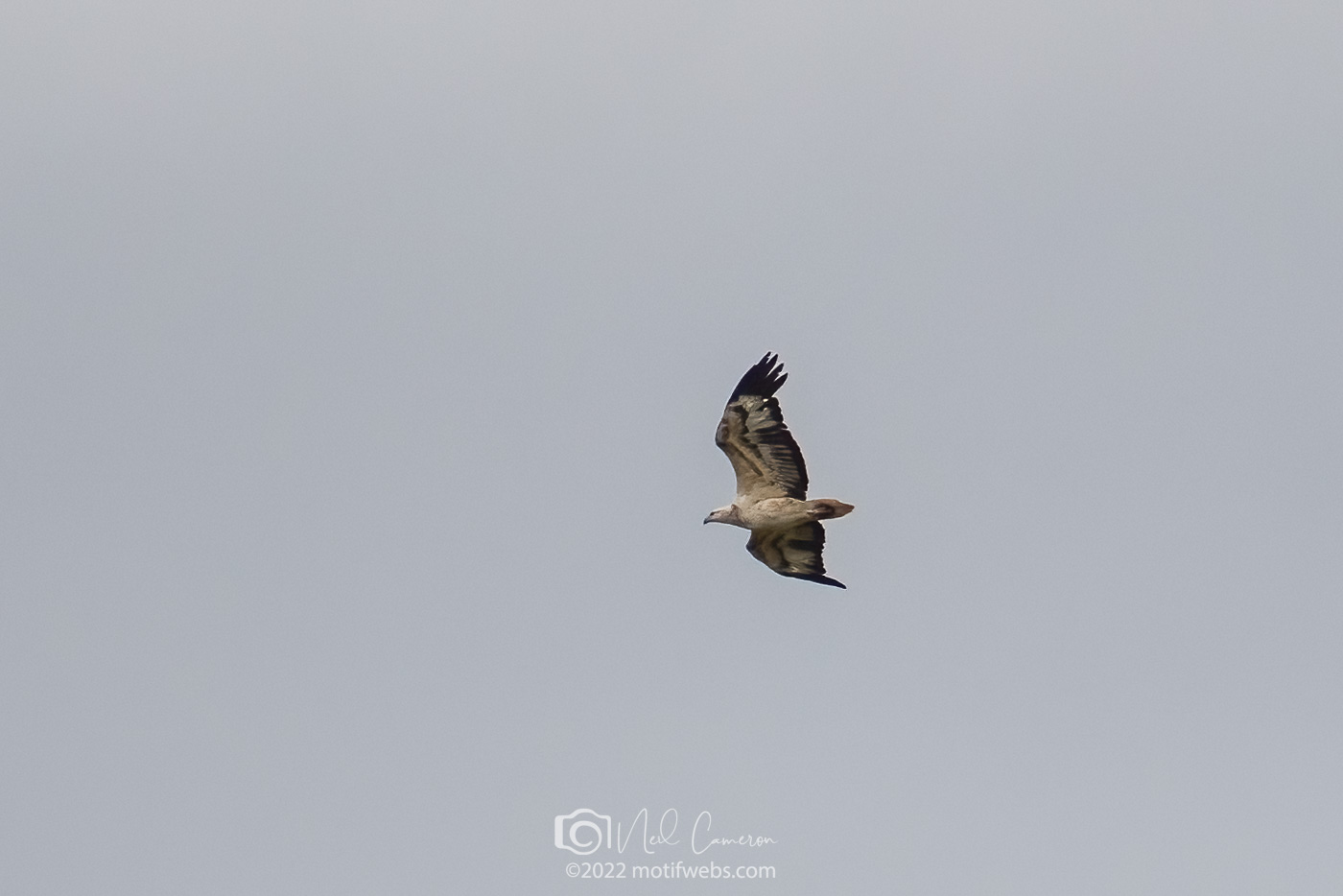 But now onto the higher-quality shots. And for this there are a couple that stand out to me with this image of a nicely posed Double-barred Finch (Taeniopygia bichenovii) possibly being the pick of the day's takings. 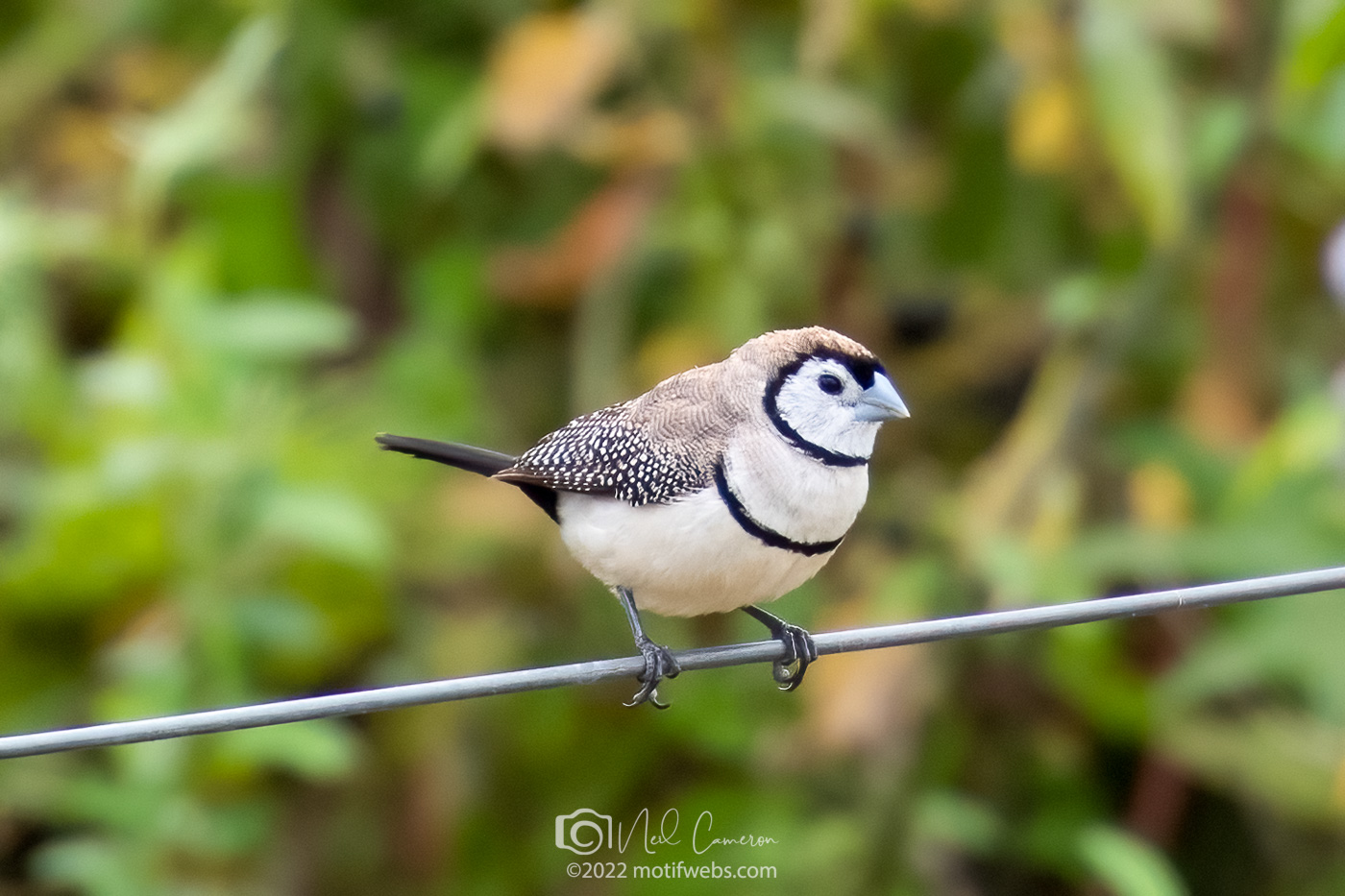 Also pleasing was this shot, one of the last of the day, of this gorgeous Sacred Kingfisher (Todiramphus sanctus) perched on a branch above the creek. It always surprises me just how small they are as I'm mentally expecting a bird of similar size to their relative the Kookaburra. 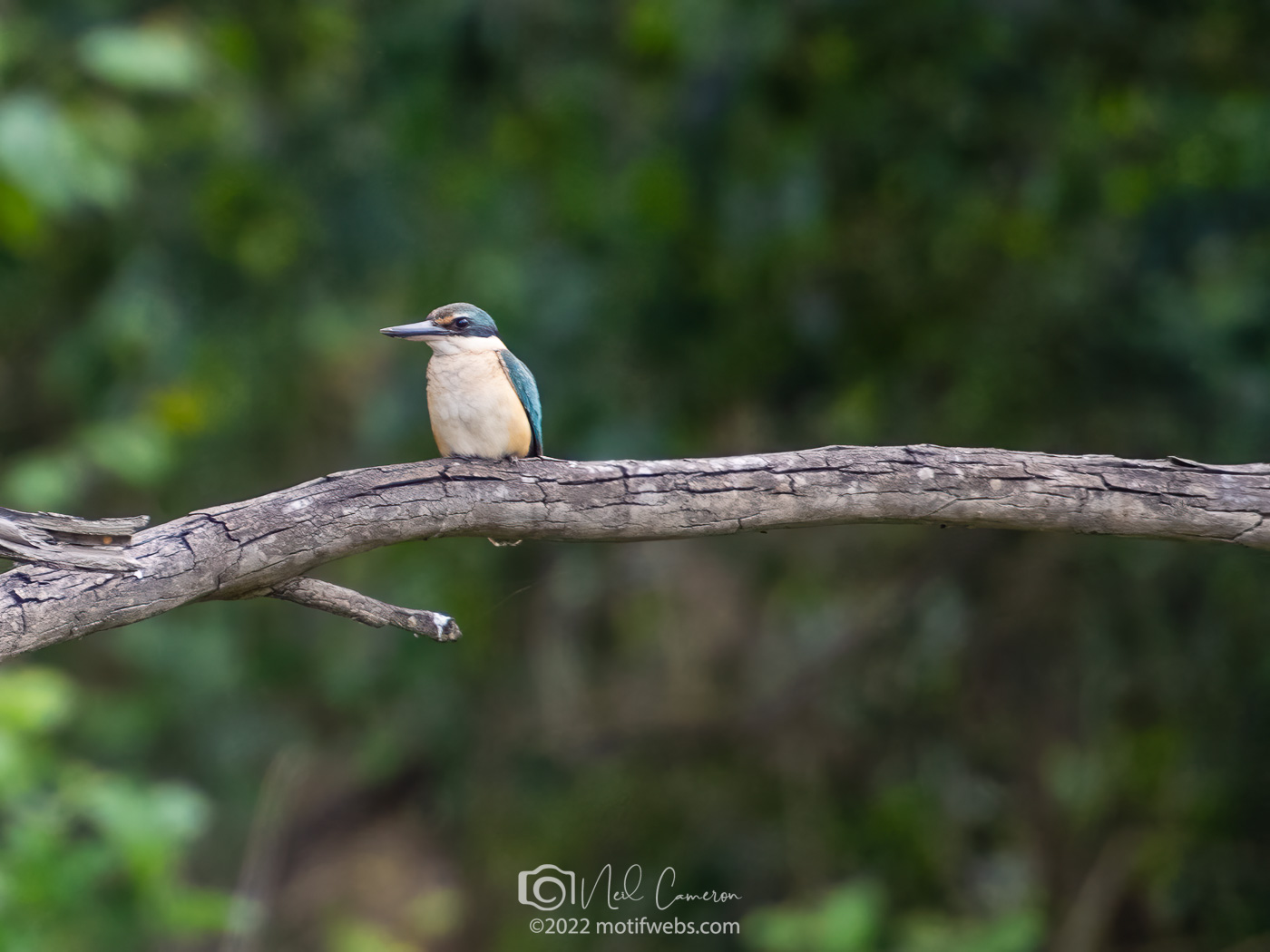 Sacred Kingfisher perched above a tributary of Oxley Creek

I was also happy with this scene of a massive, spreading Moreton Bay Fig (Ficus macrophylla). Taken with the 24-120mm f/4 lens, I feel the image works best in this conversion to black and white. It evokes to my mind the famous lines from Henry Wadsworth Longfellow's poem "The Village Blacksmith"

Under a spreading chestnut tree
The village smithy stands;... 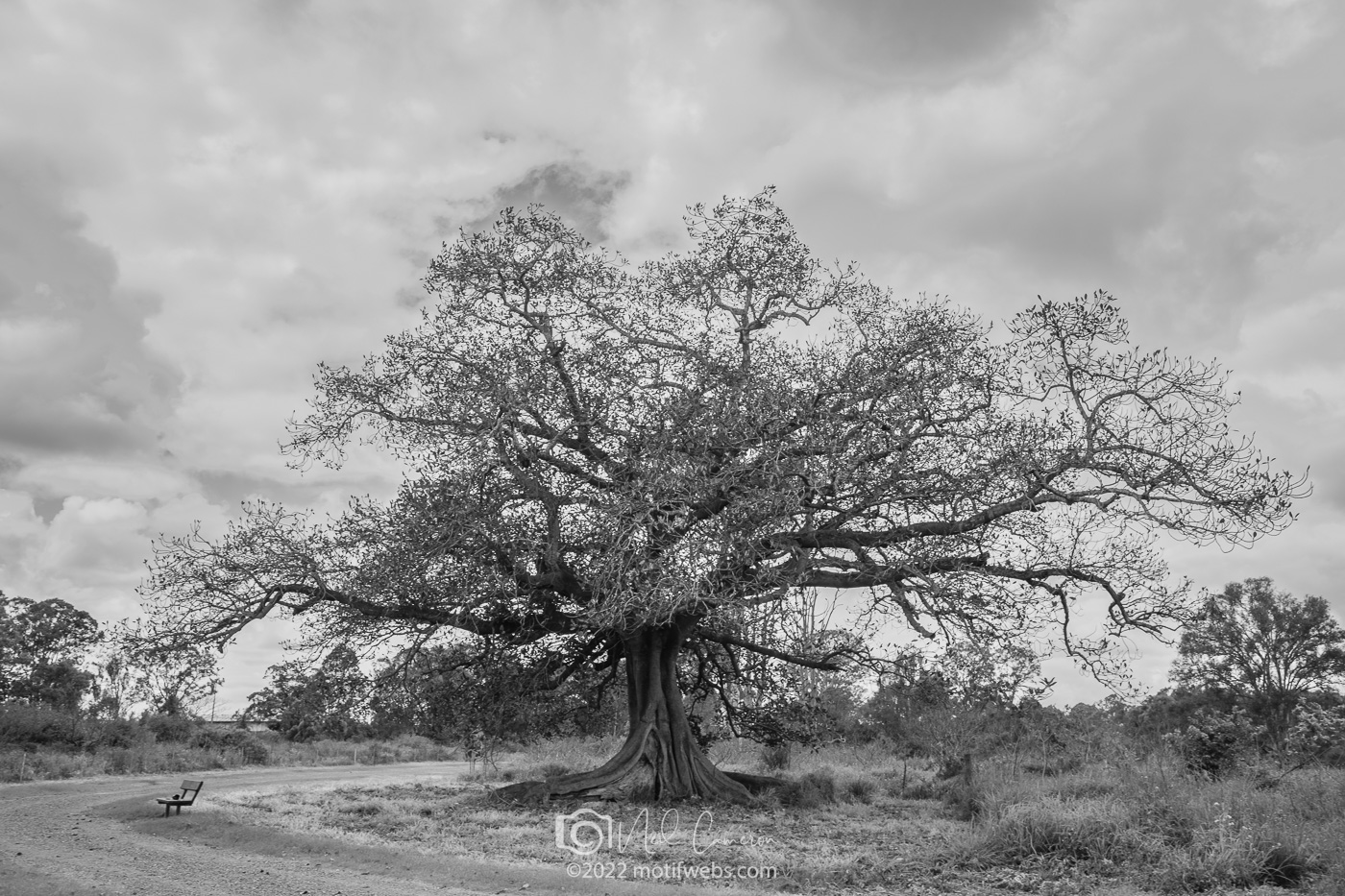 Yes, I know, it's not a chestnut tree, but allow me a little imagination. 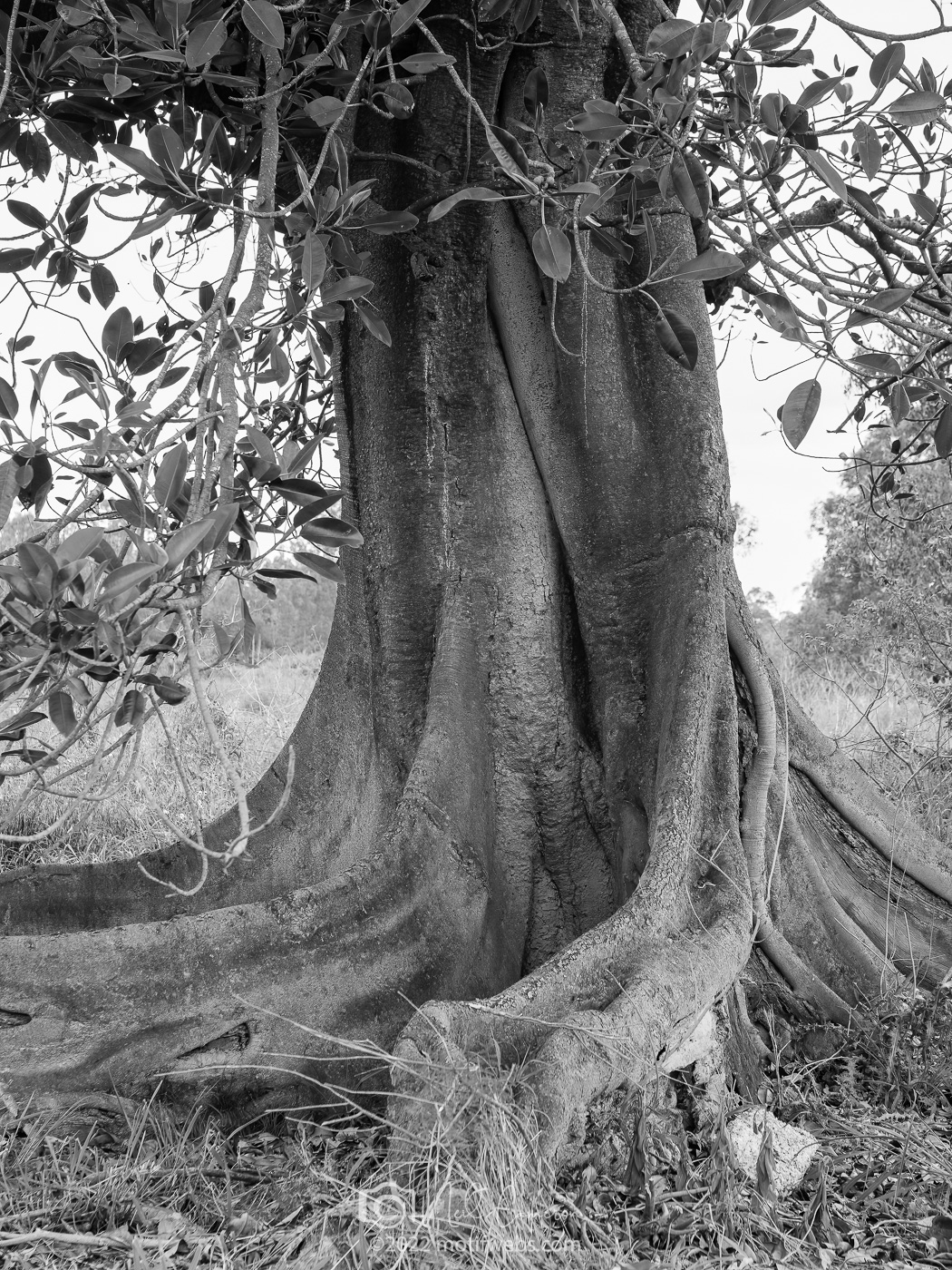 Trunk of the Moreton Bay Fig

In the scheme of things, this specimen isn't really all that massive. The tree grows much larger and the buttresses become much more pronounced and extensive. They also develop aerial roots extending down from the branches. These roots can develop into thick columns after reaching the ground.

I do find the marshy wetlands at Archerfield rather beautiful. They may be extremely flat, but they support such a diverse range of wildlife and vegetation. 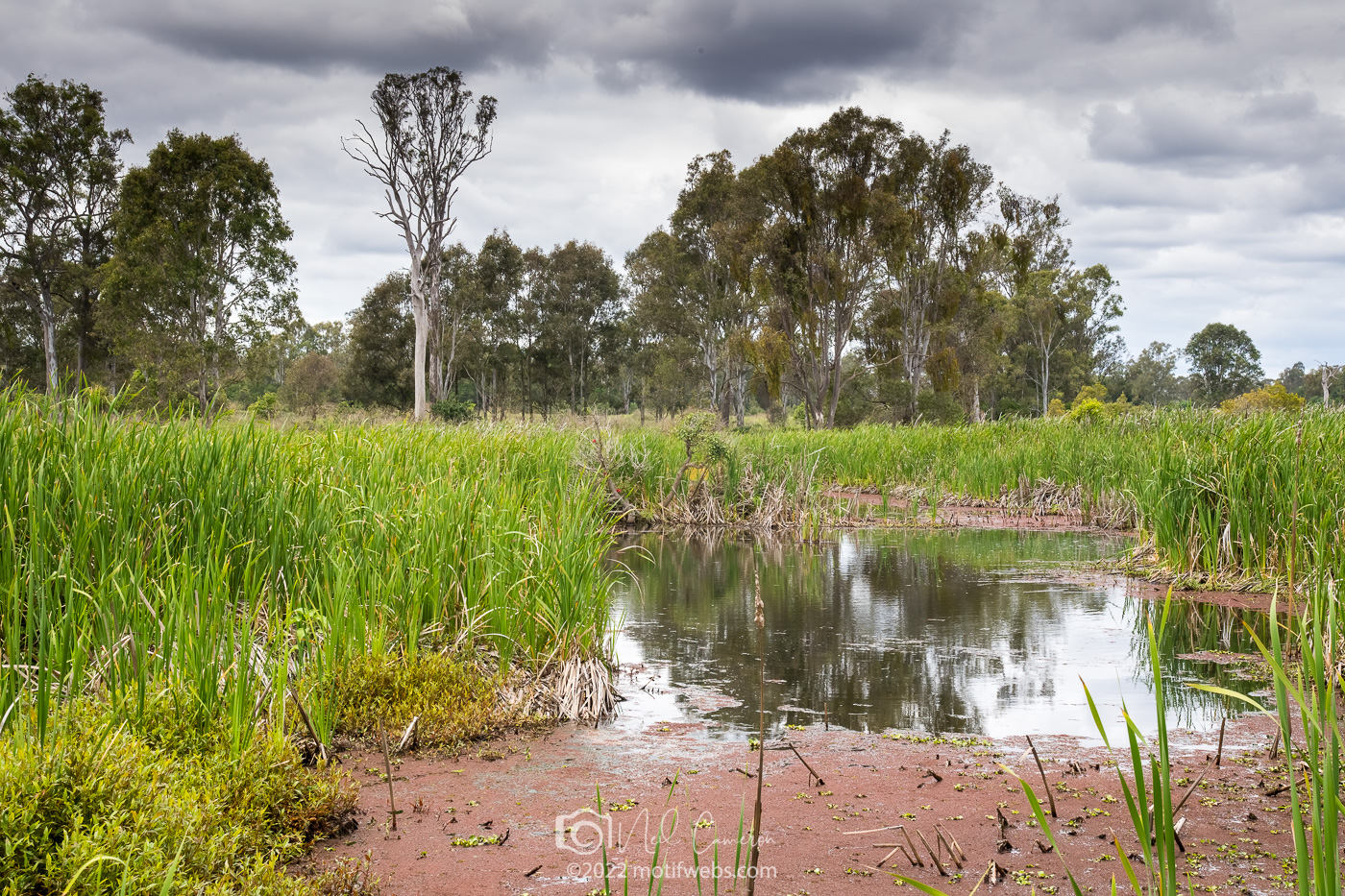 One of the marshes at Archerfield Wetlands, Brisbane.

Admittedly, it seems that most of the more aesthetically pleasing vegetation, such as this garden escapee Fine-leaf Verbena (Glandularia aristigera) aka Mayne's pest, are not native. 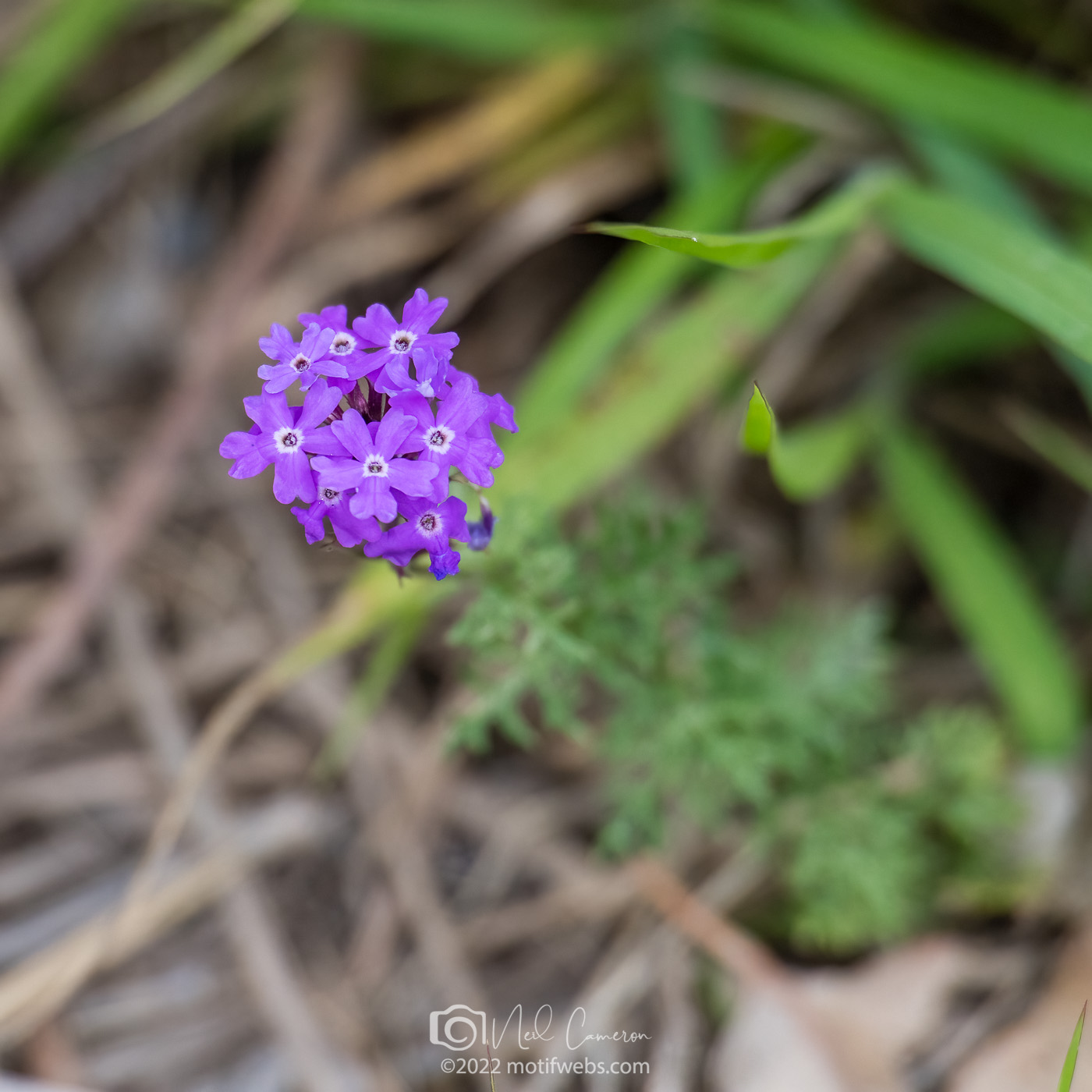 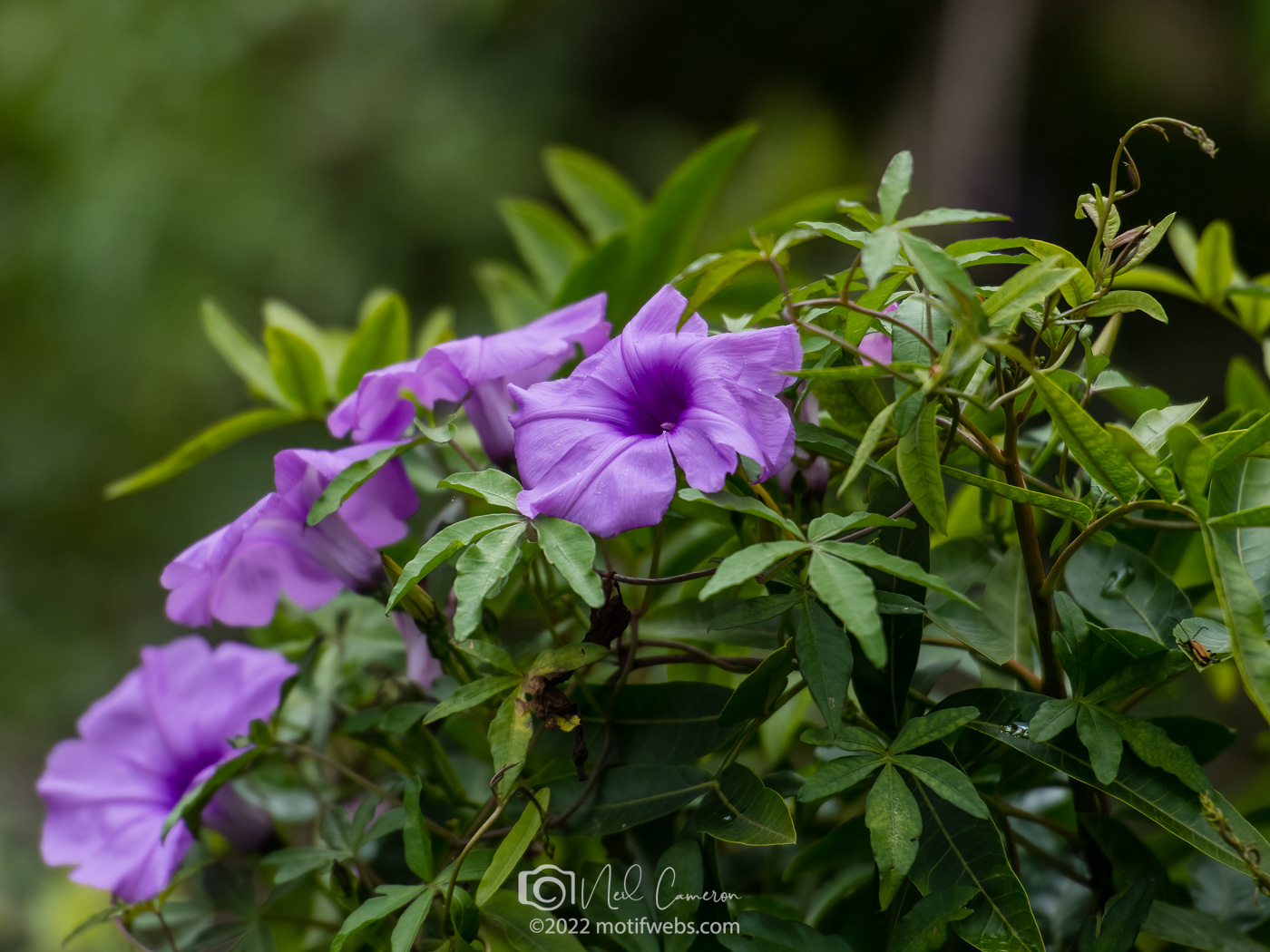 And again it was hard to resist taking pictures of the invasive Lantana's (Lantana camara) attractive little flowers. 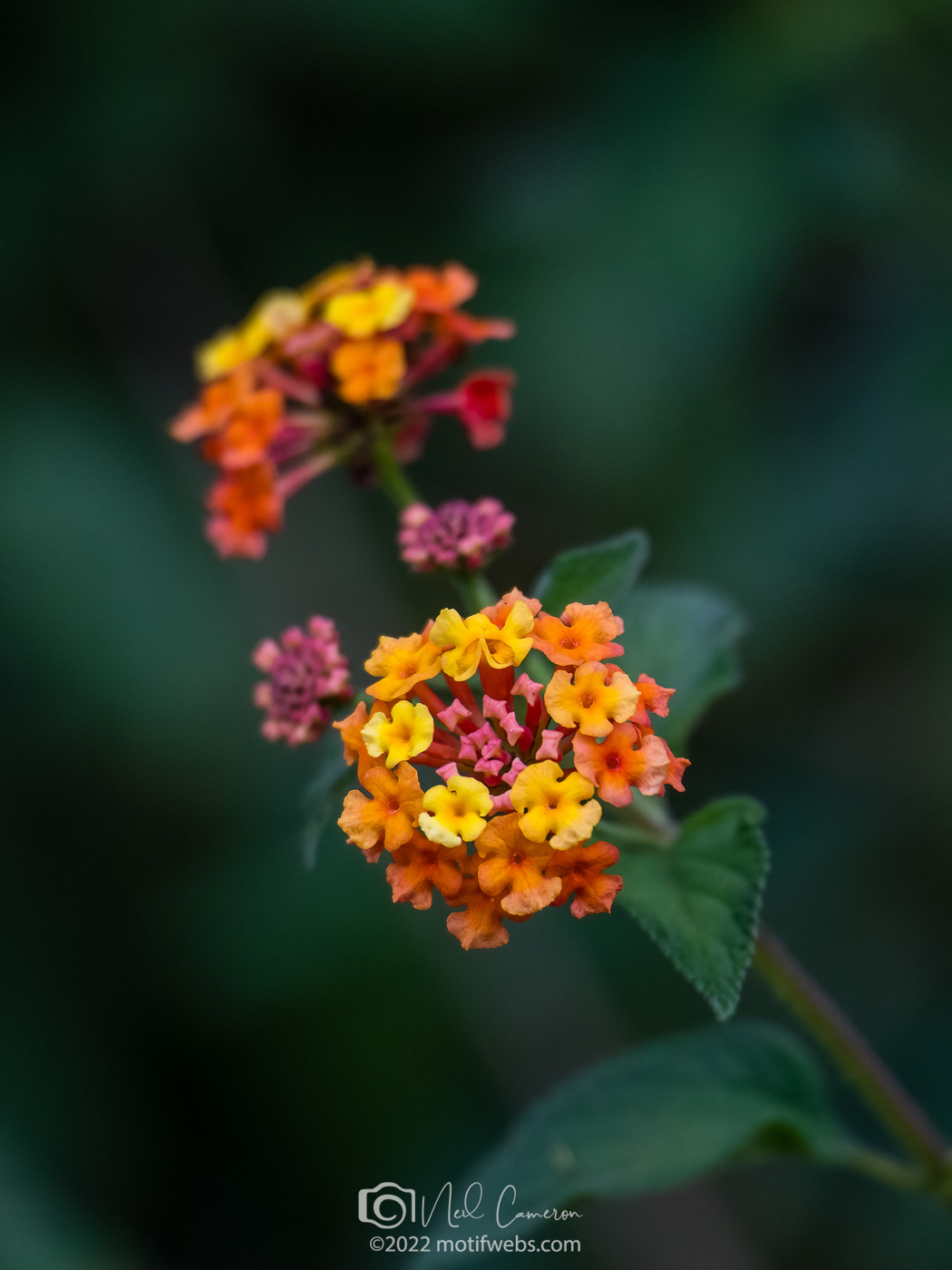 Getting back to the birds, this was the first time I have managed to get all three fairywren species common here on the one trip. It was also a long few years since I had managed to get a shot of the gorgeous Variegated Fairywren (Malurus lamberti). I find that they tend to be shyer and flightier than the other varieties, loving to hide in the depths of shrubs, small trees, and the undergrowth. Even this one shot was all I got as this male made a brief stop. I did see another male and a female as well, but they hid themselves well. 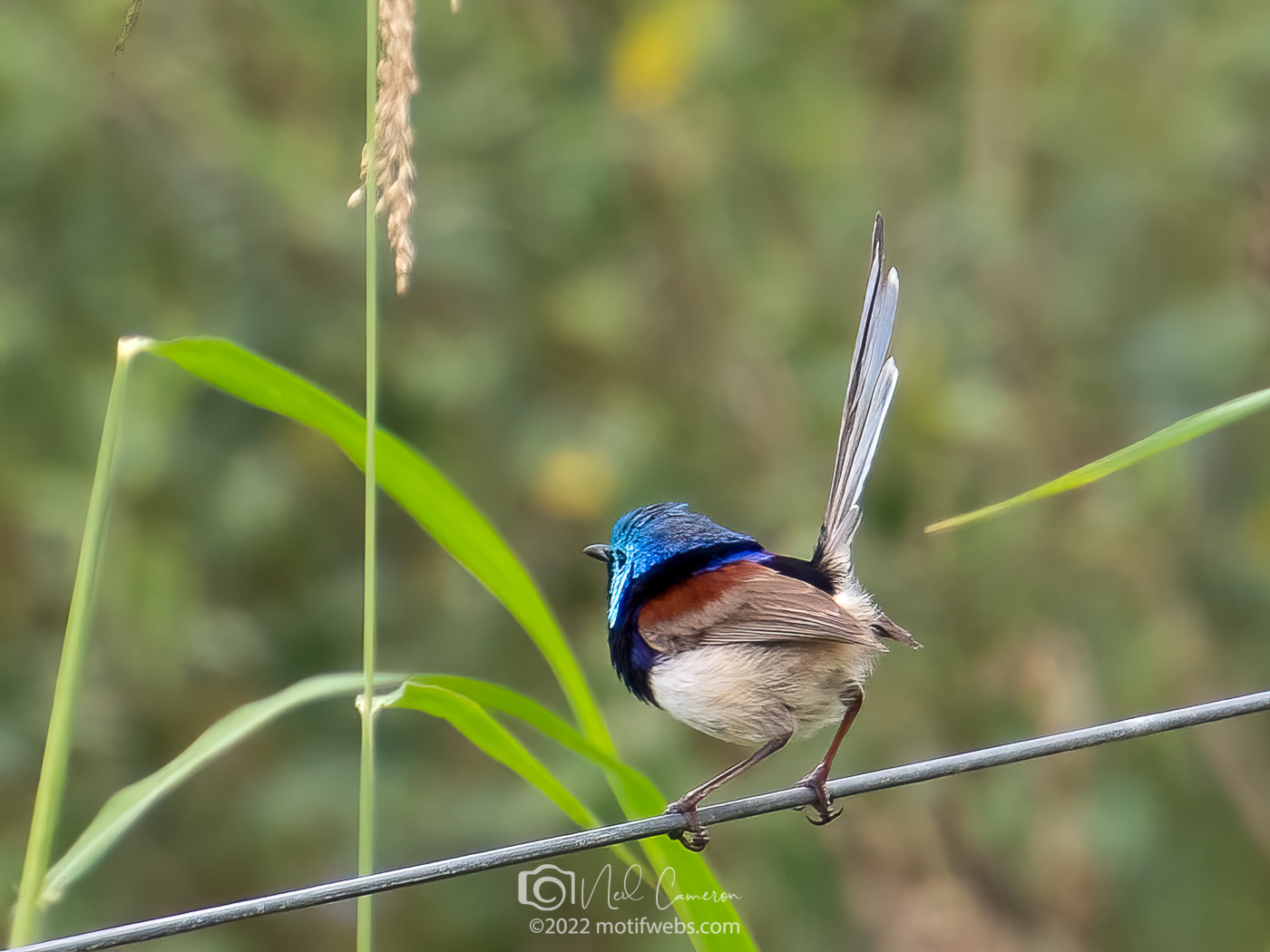 Here we have a male Superb Fairywren (Malurus cyaneus). I saw and managed to photograph several males on this jaunt, but I remember only seeing one female, and no images of her. 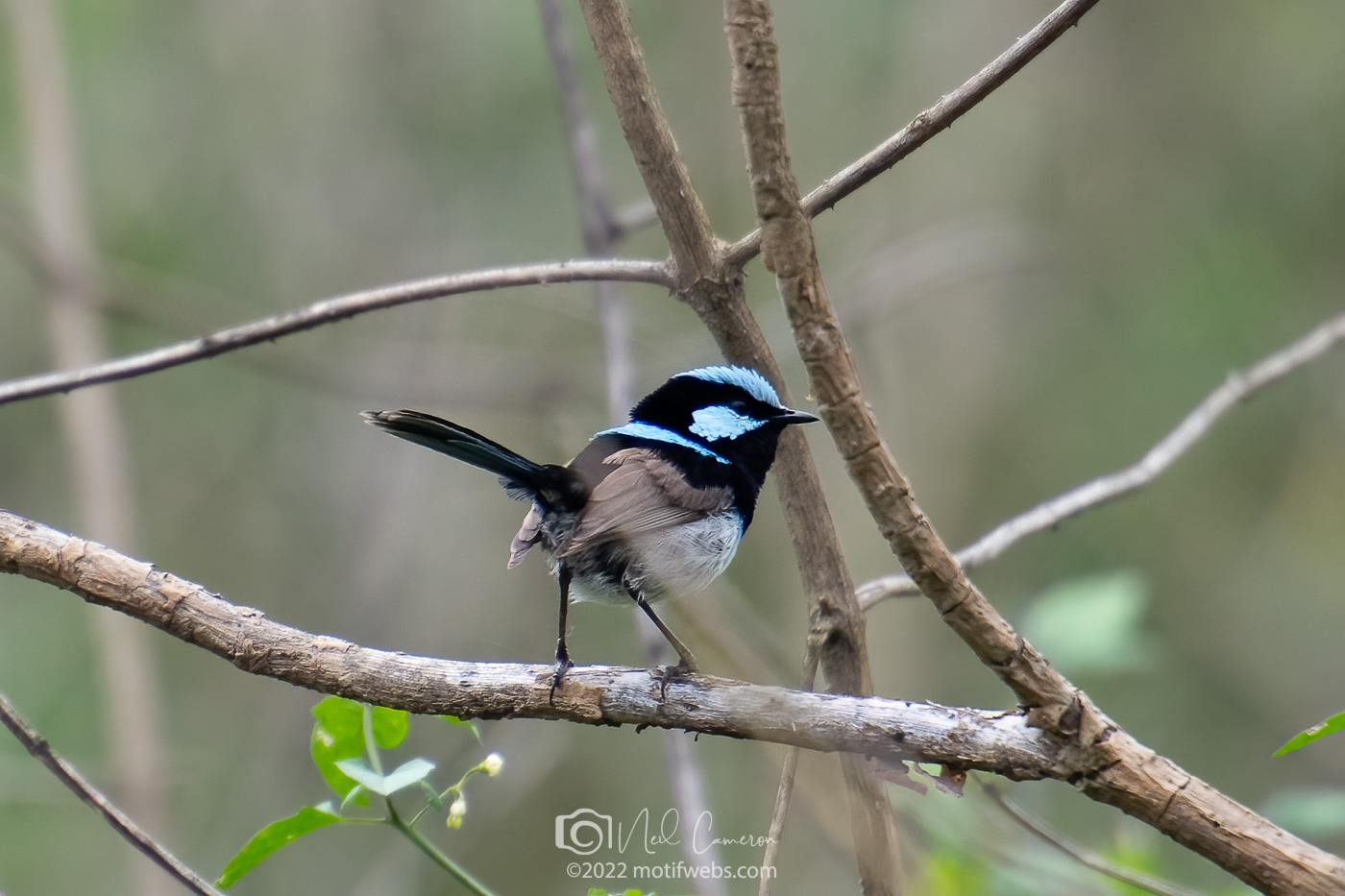 Lastly on the fairywren front is the Red-backed Fairywren (Malurus melanocephalus). With his brownish wings and back this one has yet to reach his full spectacular breeding regalia for the season. Again, I saw a couple of males, but only recall seeing one female who was too shy to pose for her portrait. 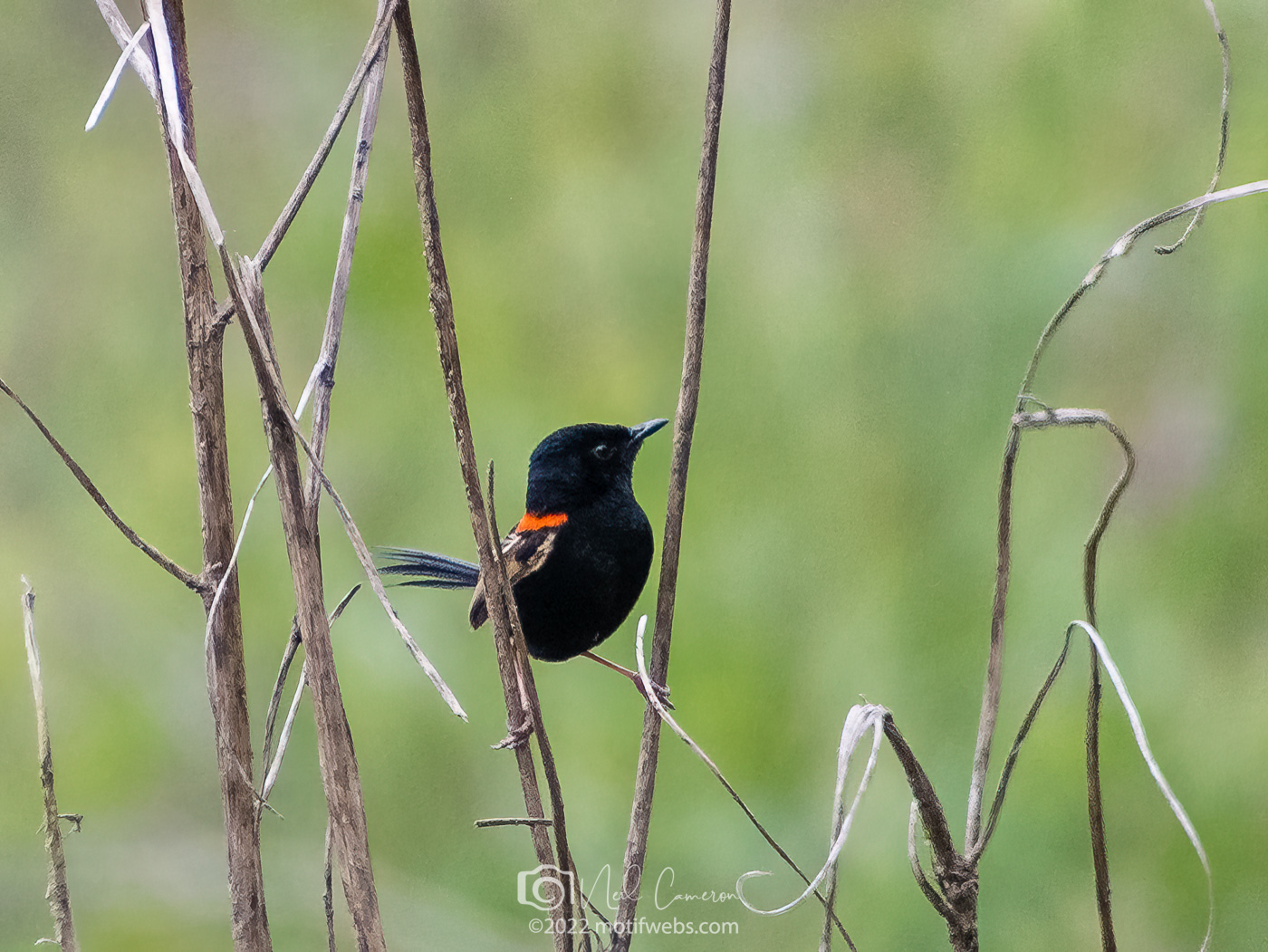 Photographing such beautiful, but tiny birds as fairywrens is both challenging and enjoyable. I find it so very satisfying when I get it right. Sadly, however, I didn't quite get it right with any of these three on this occasion. Either the bird preferred to give me a view of their butt or they posed with stray sticks and branches lying between themselves and the hapless photographer or with a cluttered, messy background. Then again that is also one of the compelling aspects of this form of photography - knowing that you will keep on trying. Oh, and of course, we are never satisfied that you've achieved the perfect shot. Most photographers, myself very much included, are our own worst critics. We constantly strive for ever better and ever more creative images. It is a never-ending Sisyphean task.

Similarly with all three of the following images, there are things I can criticise:

Golden-headed Cisticola (Cisticola exilis) - a lifer, but with a cluttered background and a branch over the very top of it's back.

Pheasant Coucal (Centropus phasianinus) - well I missed the perfect shot as it flew across the track and ended up with messy images and some horrible chromatic aberrations (that awful pink/purple colouration of some of the branches) of it high in the trees. 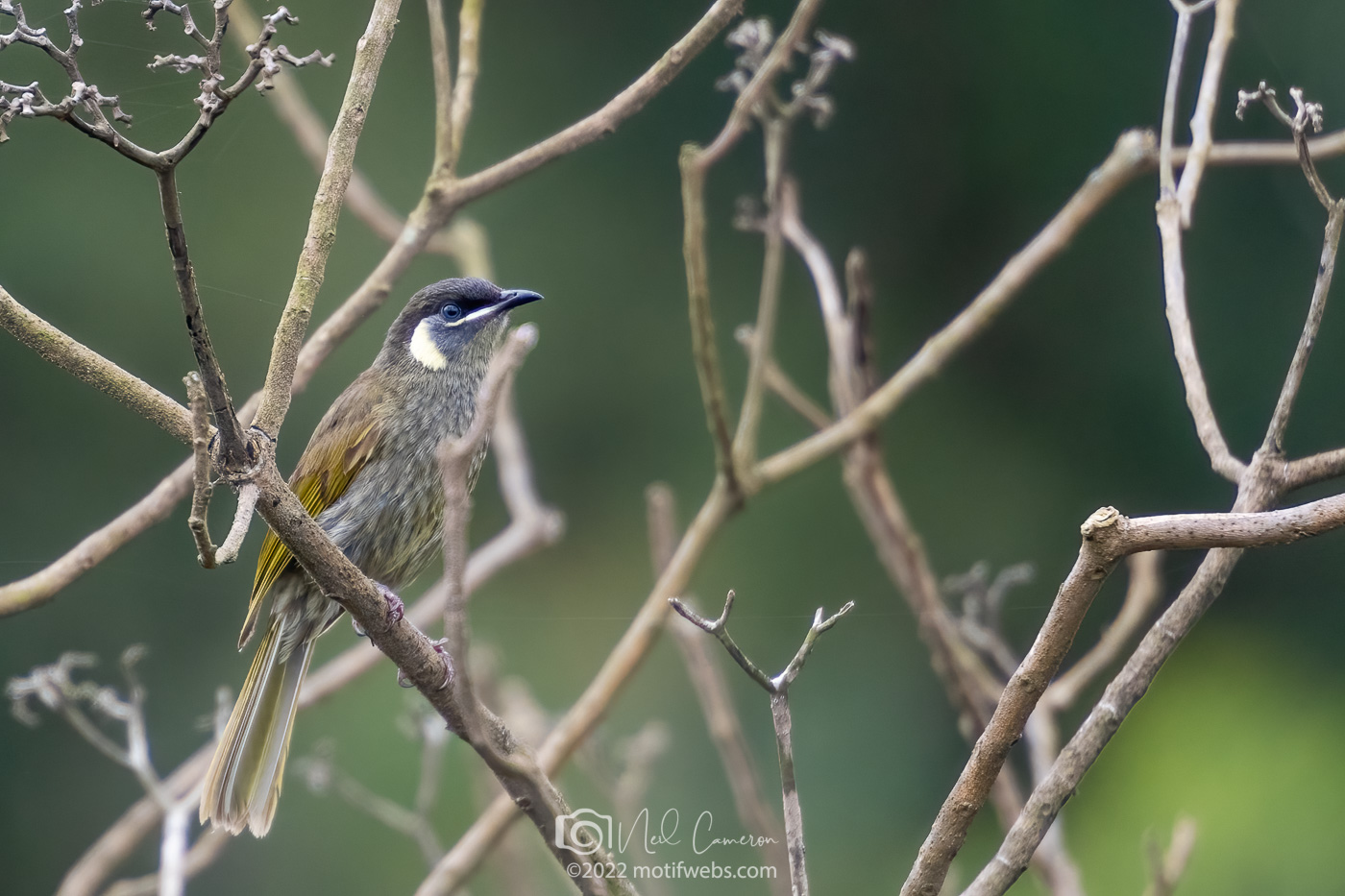 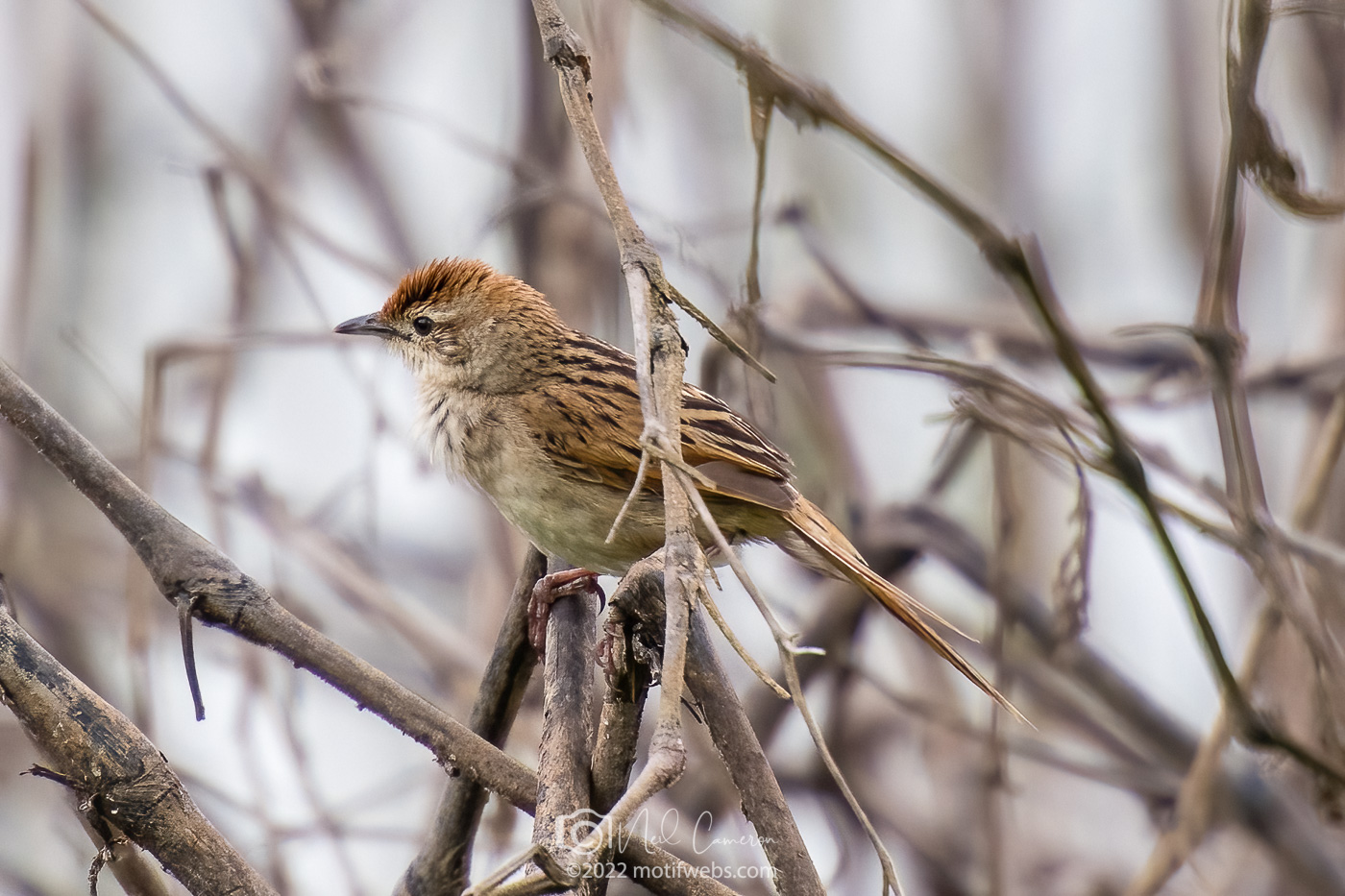 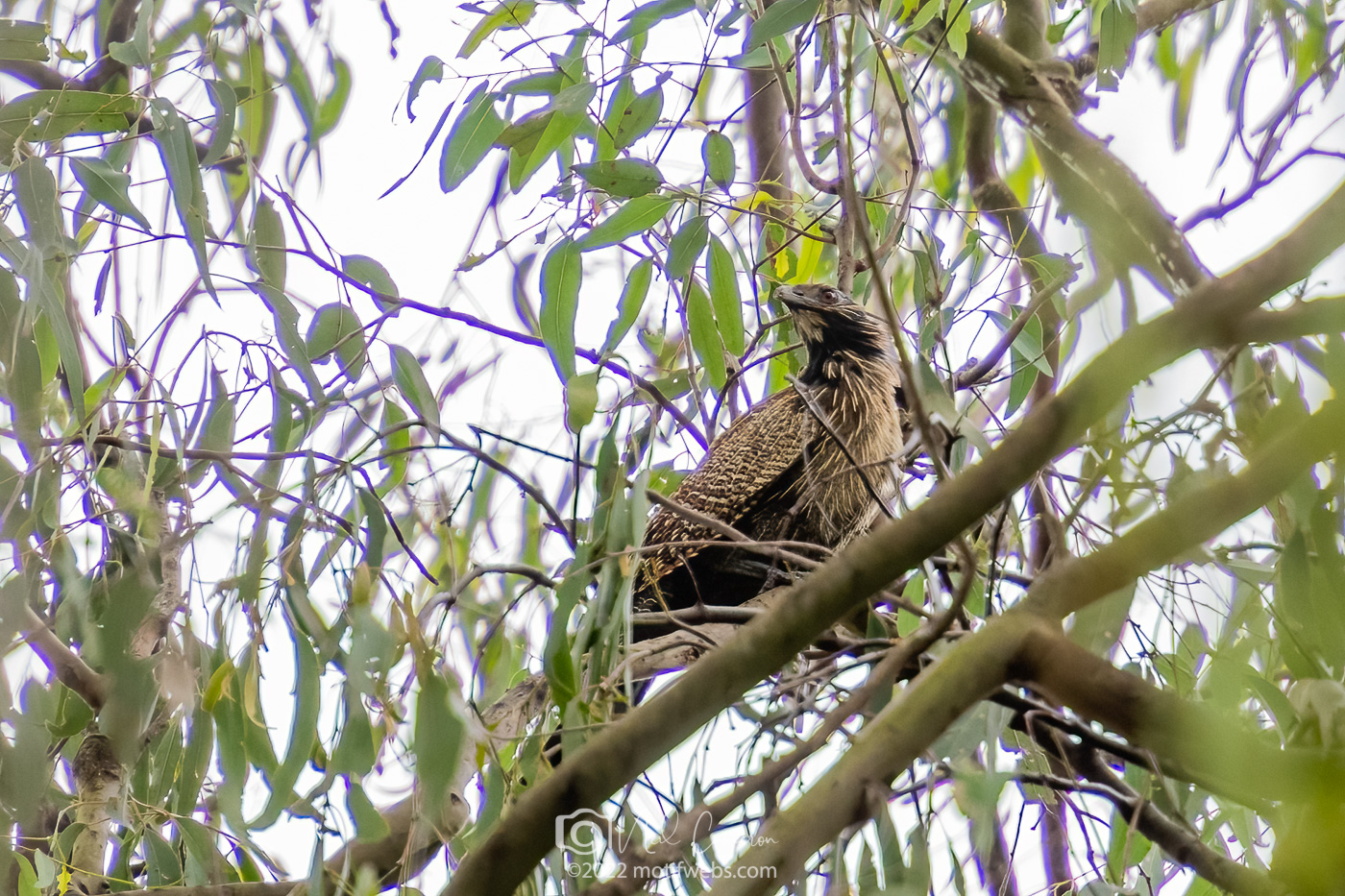 Now having been so self-critical and negative let's end on a more positive note with two images I quite like (although I can see flaws, I'm determined to ignore them).

First up is this Willie Wagtail (Rhipidura leucophrys) caught a micro-second before taking flight. 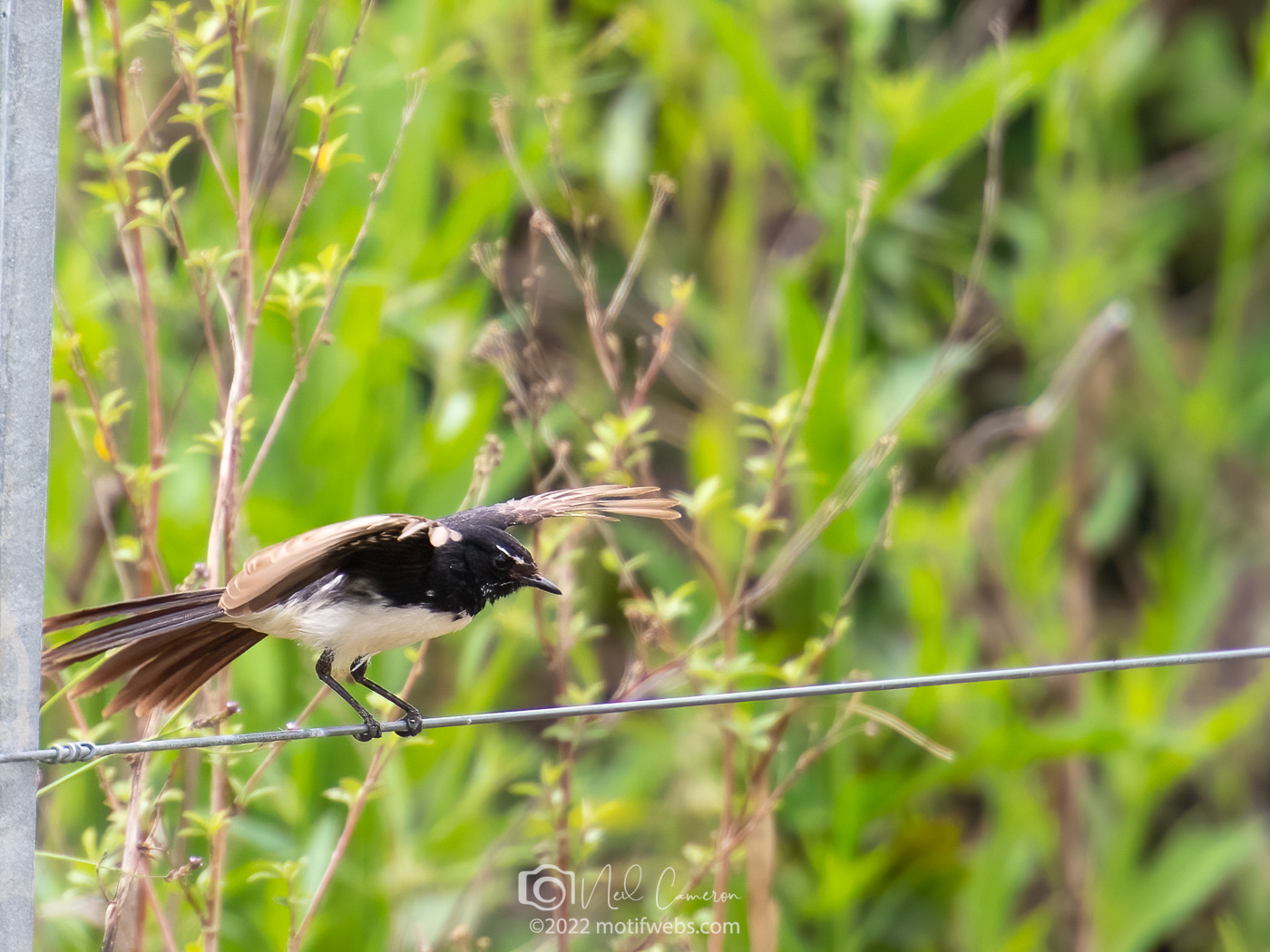 Finally, let's close the images off with this messy eater of a Red-browed Finch. A small flock of 5-8 birds were rapturous with this patch of grasses as though it were ambrosia. 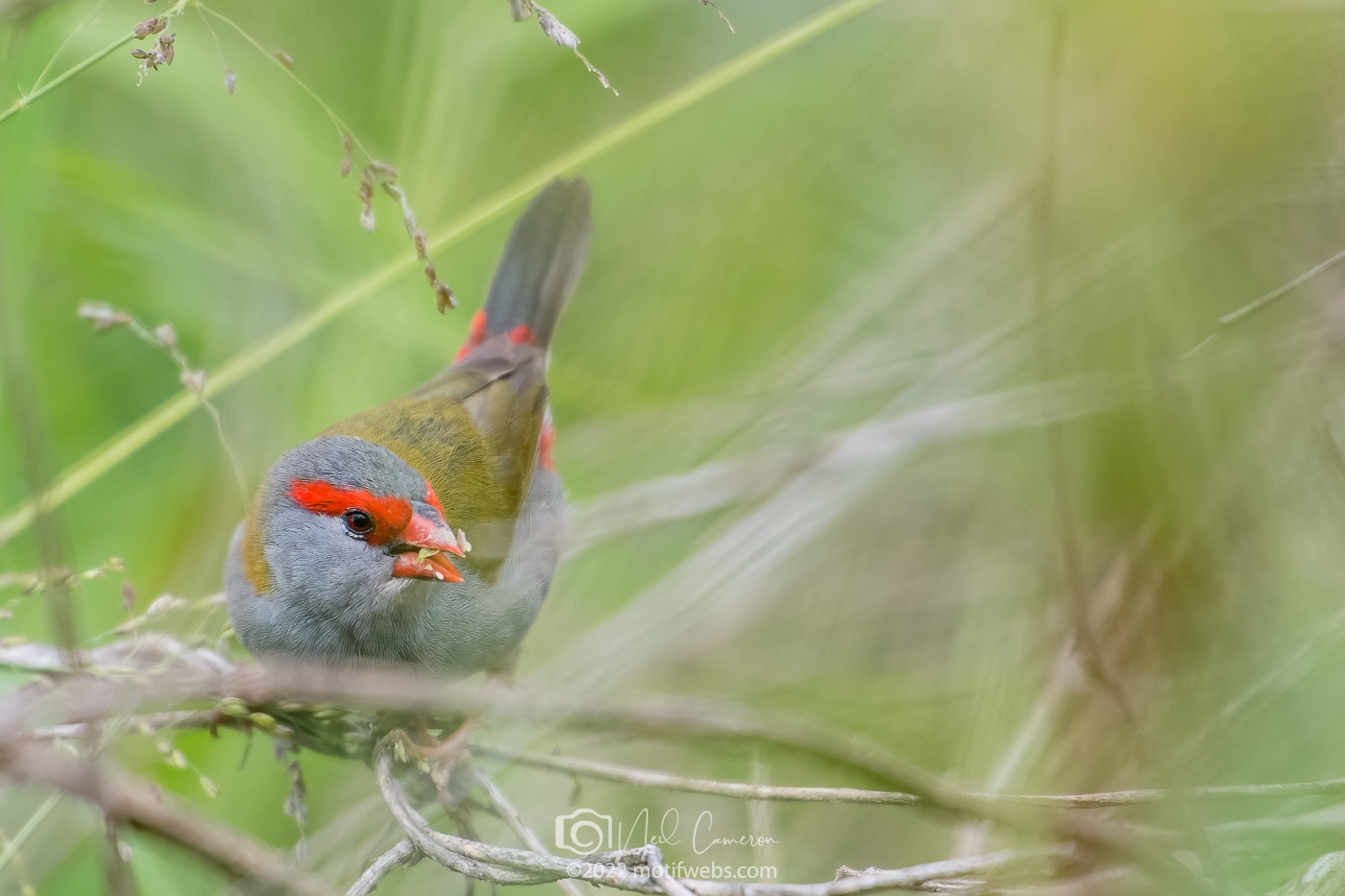 Thank you dear reader if you managed to bear with me to the end of this long post. I trust you enjoyed it as much as I did writing it and even more so photographing it. All that remains is to include the map and to note that according to eBird I spent 2 hours, 40 minutes on the hike and walked 4.1 km. However, according to my Garmin watch I only walked 3.0 km. Shrug. 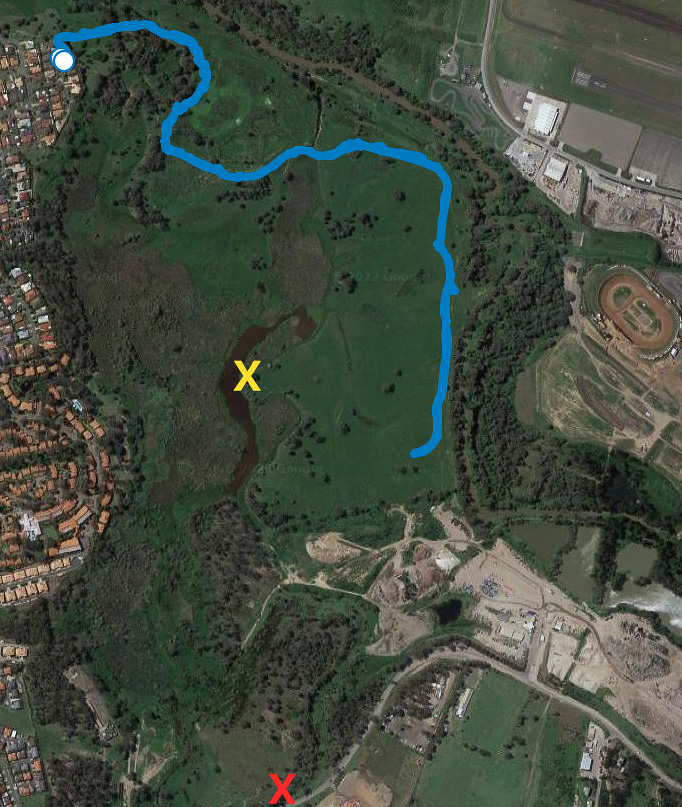