The purple portent of doom

The jacaranda (Jacaranda mimosifolia) is not native to Australia. It originates from a small native region in north-west Argentina and neighbouring Bolivia. According to Dr Russell Barrett in a November 2018 Australian Geographic article (opens in a new tab) the species was first planted in Australia, in Brisbane to be precise, in 1863. It then spread relatively rapidly from there and is now found in most Australian states. However, it is particularly widespread in southeast Queensland and the Northern Rivers area of New South Wales.

So why does the sub-heading refer to it as “The purple portent...”? Easy, its coming into bloom in mid to late October has traditionally signalled to Queensland university students that exam time is nigh and they should already have started studying. This is particularly relevant given how abundant the trees are in the inner western suburbs of Brisbane, including St Lucia where the University of Queensland (and the author) is located.

Given I have been unable to shoot motorcycle racing due to health reasons, I was determined that I would make an effort to capture the purple masses of the jacarandas at its peak here in Brisbane. I need to keep my photographic hand in and I do that by photographing things like this and wildlife - I love shooting wildlife.

This was further reinforced when I captured this Noisy Miner (Manorina melanocephala) striking a pose amongst the flowers of a small tree near the Toowong Rowing Club boatsheds. 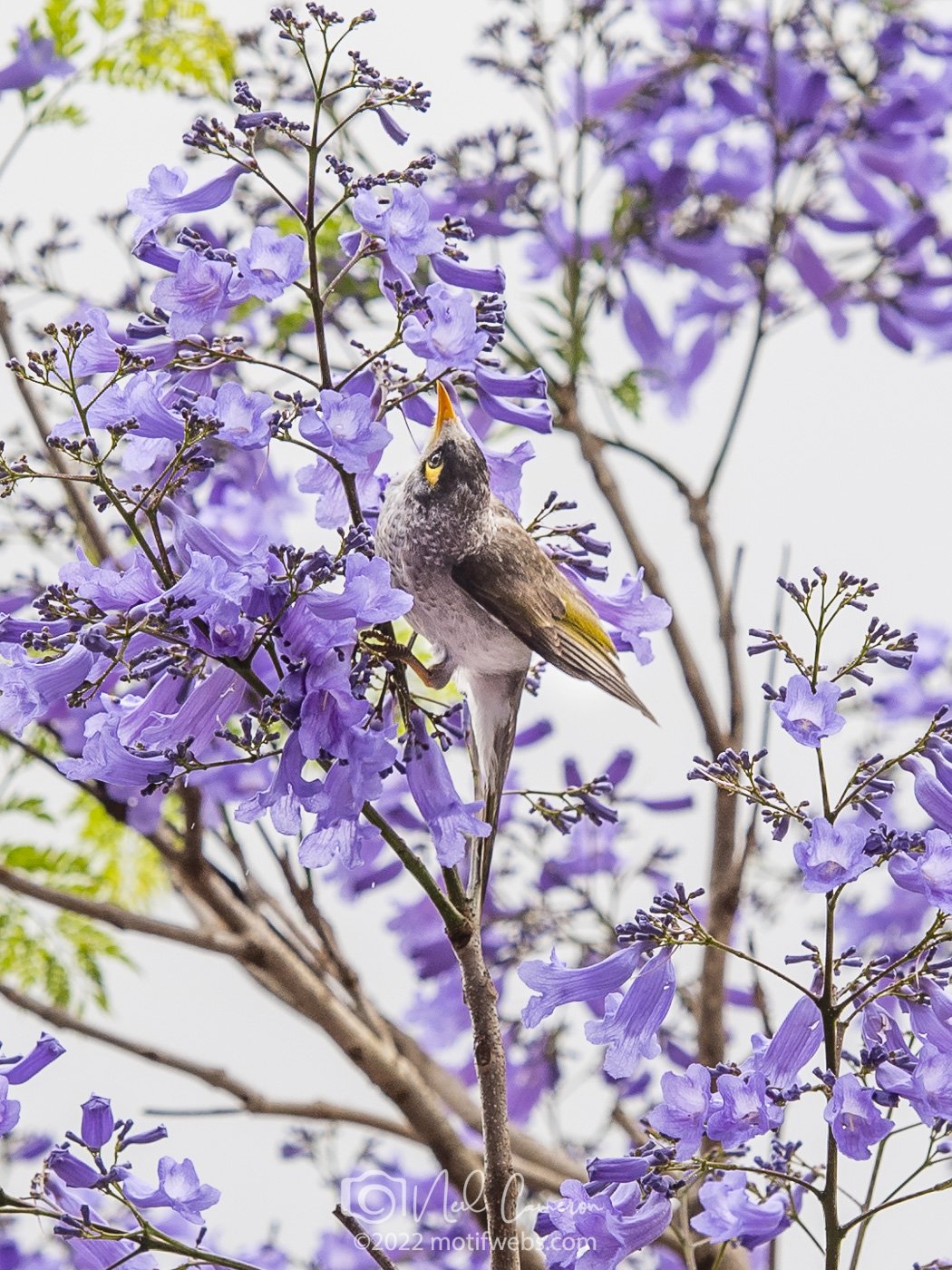 Noisy Miner strikes a pose in the midst of Jacaranda blooms

When I got home I did some research and discovered that one of the hot spots for jacaranda blooms in Brisbane is William Dart Park, just a kilometre away. I had never heard of this park, but when I looked at the map, I realised that I knew it quite well. I say “quite well”, but I had not known that there was an avenue of large jacarandas forming one boundary of the park. This boundary runs beside the street that gives the park its other name, a name I did know, Munro Street Soccer Fields.

So, with the peak time for seeing the trees in full bloom fast approaching, if not already at its zenith, I planned to spend some time at the park with camera in hand on 18 October.

If you are wondering just how widespread the trees are throughout Brisbane, the answer is very! Brisbane is a hilly city with a lot of trees, so from any vantage point during mid to late spring, you get splotches of purple throughout the deep green. However, avenues or groves of them like the one at William Dart Park are less common.

This shot gives an idea of just how much that vibrant colour stands out. 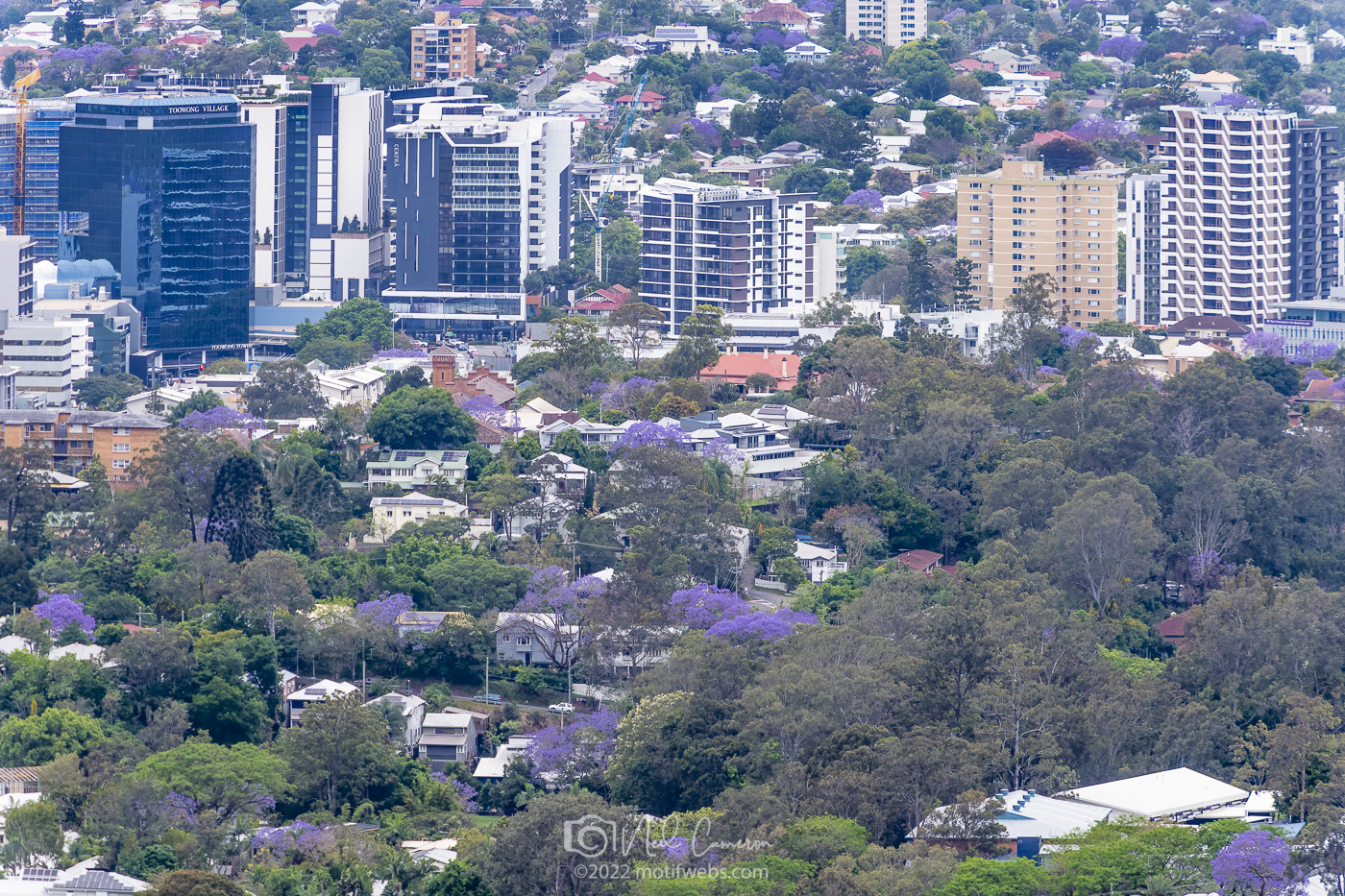 Magnificent individual trees, such as this one at an entrance to Bank Street Reserve in Alderley are found throughout much of the city. 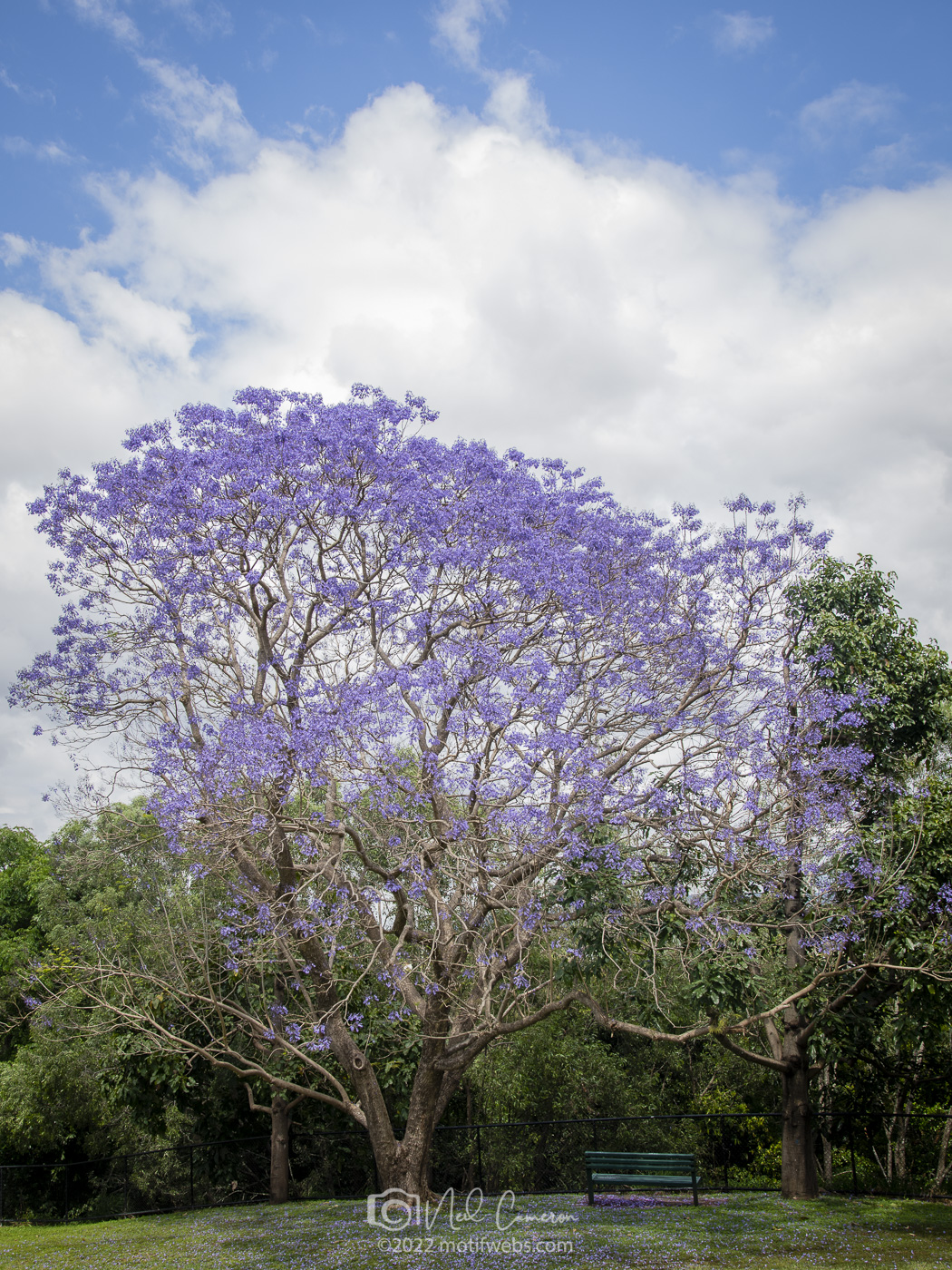 That image was taken earlier on the same day as I made my photographic pilgrimage to the St Lucia park.

I was hopeful, but a little pessimistic given I hadn’t been having the best of days after I’d strained an achilles tendon a few days prior and had dipped on seeing a particular animal I had gone to Bank Street Reserve to capture.

It turned out that I need not have worried. The jacarandas were in spectacular, superb, wonderful <insert more hyperbolic adjectives here> bloom! 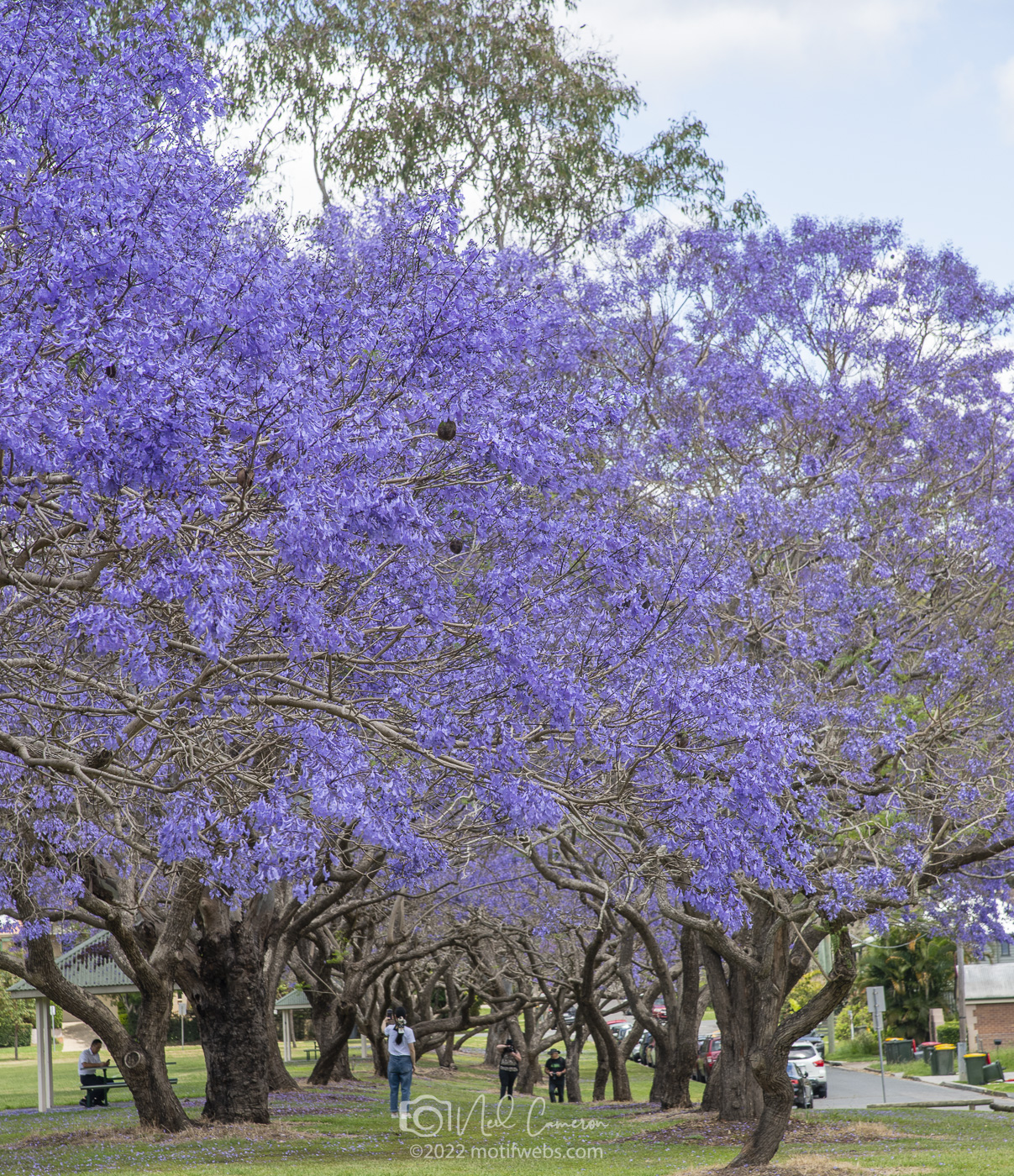 And with a partly cloudy sky, a photographer could not ask for more perfect conditions. 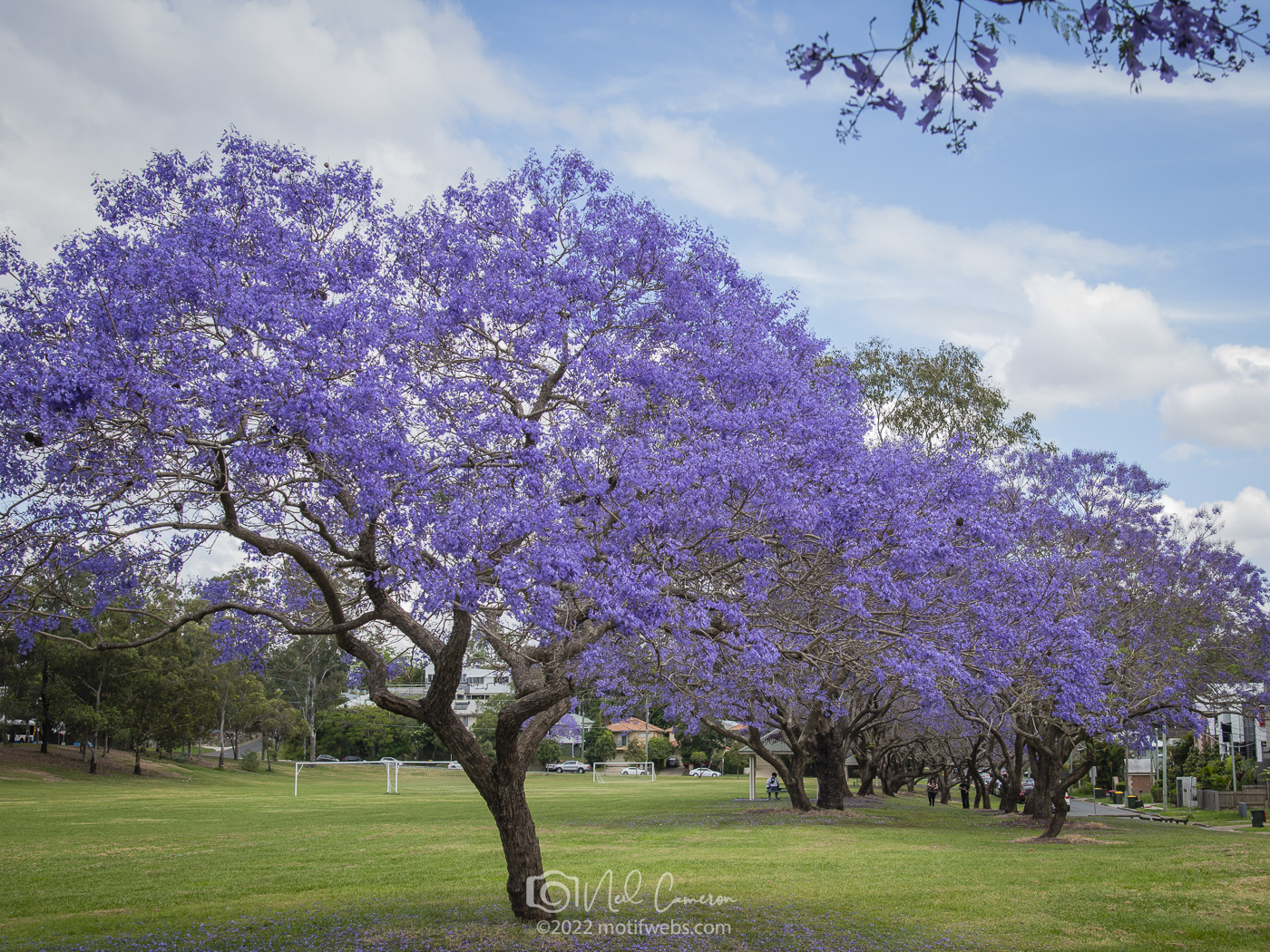 There were also a few people out and about. Some taking photos with varying levels of equipment. checking to make sure that they had captured the beauty.

"Did we get it?" William Dart Park, Queensland

Others walked together enjoying the glory of the day and the purple splendour (oh my tortured prose). 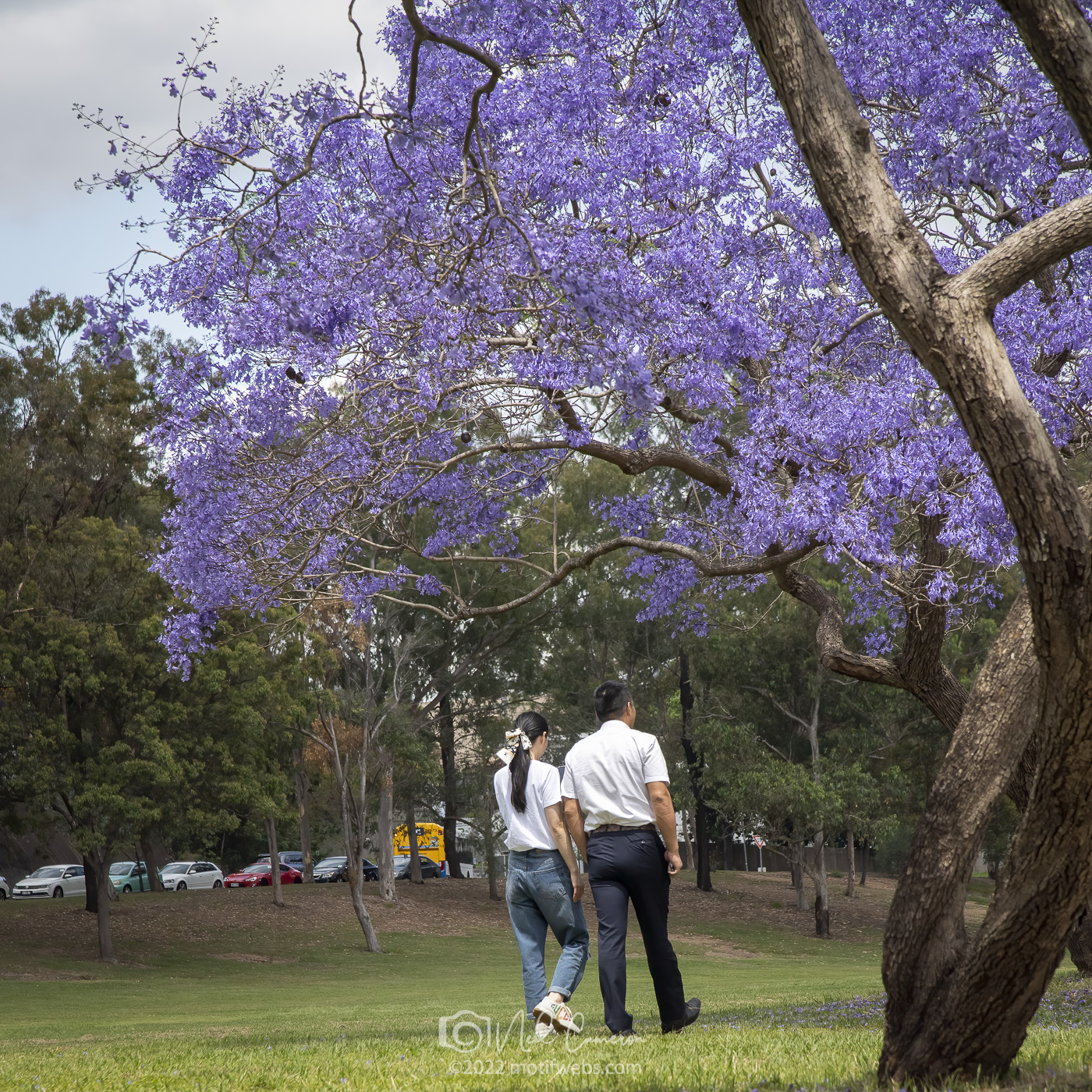 Looking back, I am so very pleased that I had made the effort to visit the park. Too often lately, I would have procrastinated with the thought, “The jacarandas are looking nice, I should find somewhere to photograph them.” while not actually doing anything about it. 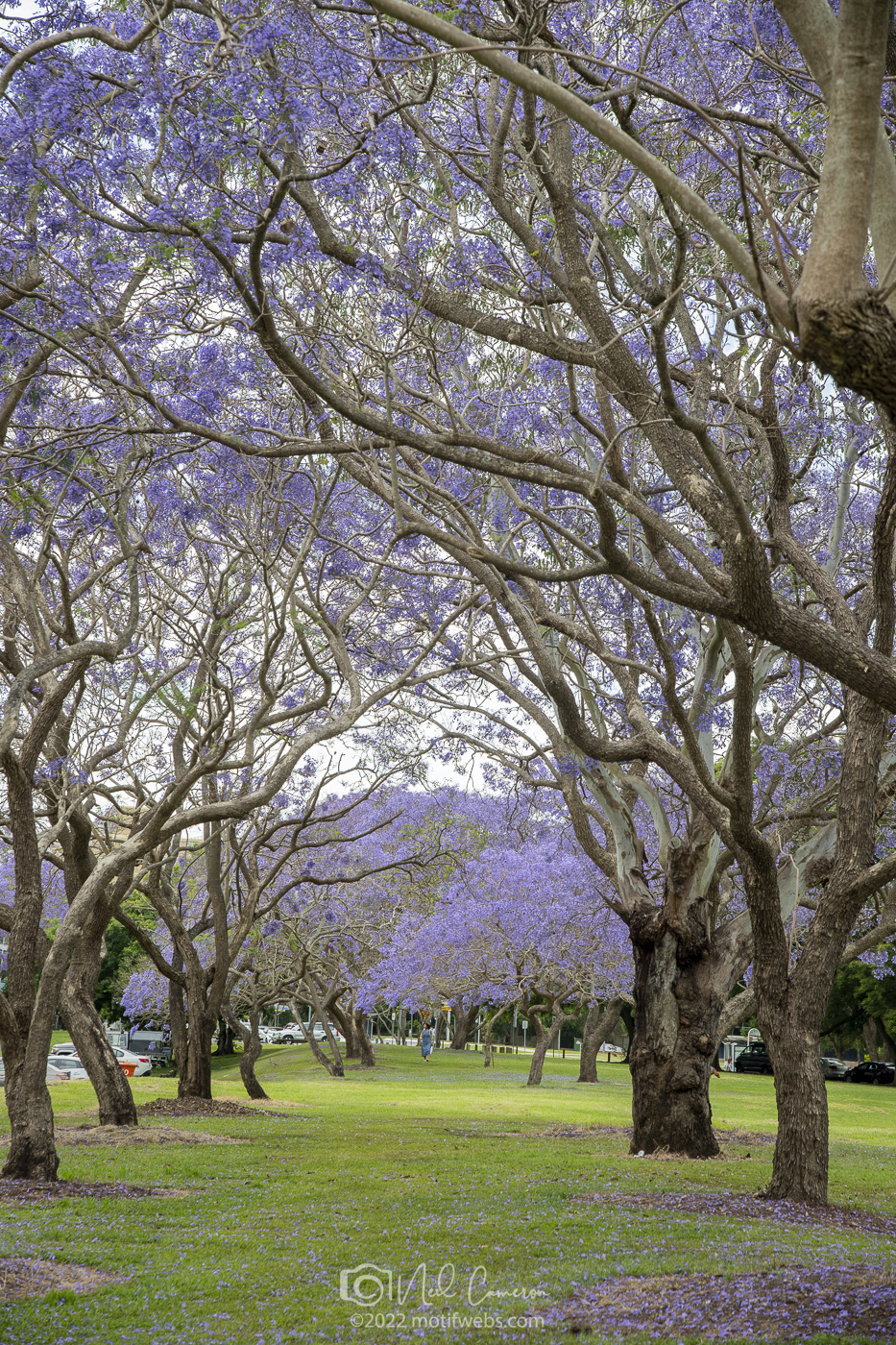 There is, however, a downside to all these beautiful flowers. They tend to create a mess on the ground when they fall, especially in wet weather. 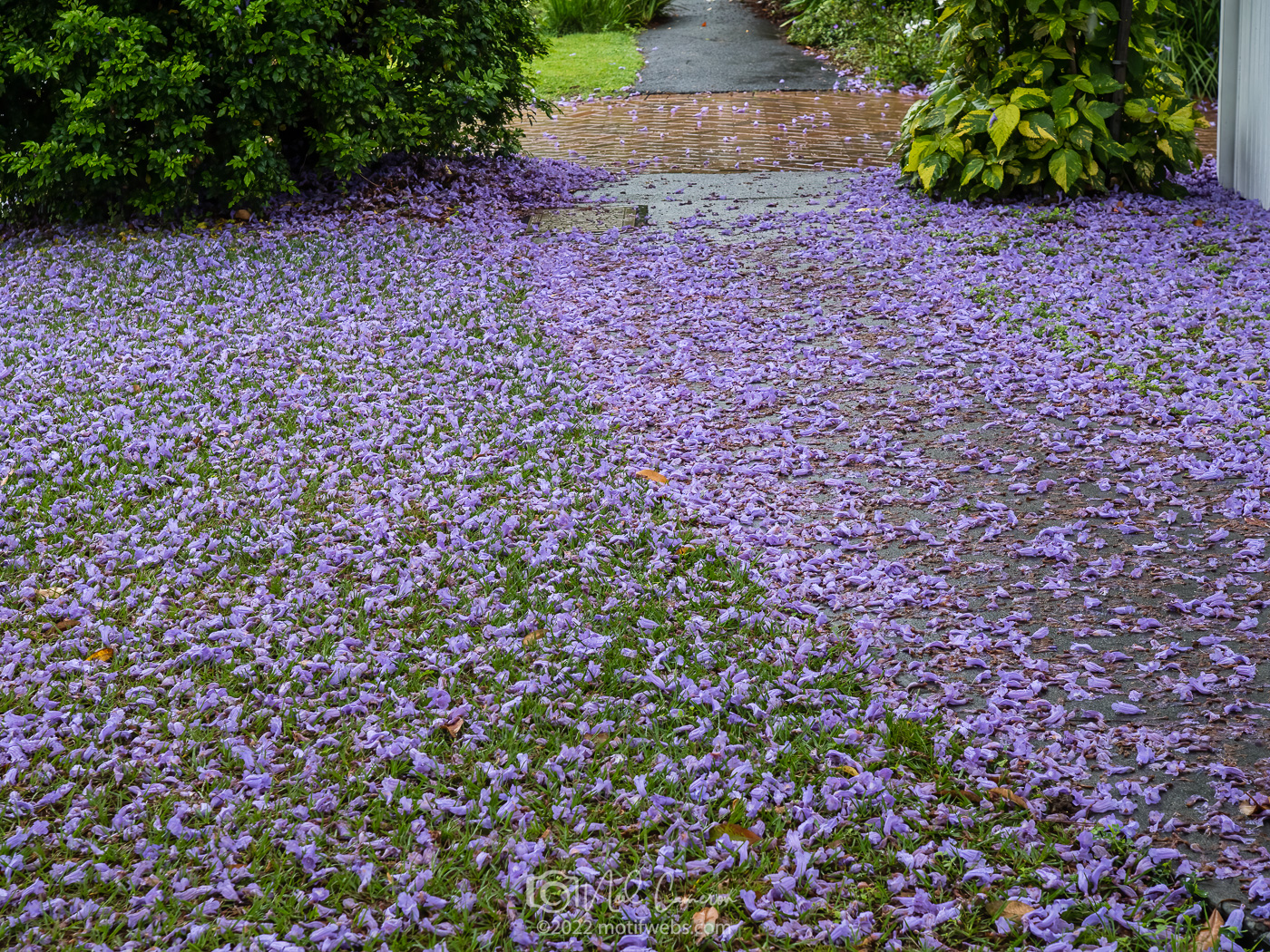 The flowers may look beautiful even on the ground, but that's a slippery mess

If you enjoyed this little story then consider signing up to get notified when I make new posts by filling out the Contact form.

Some bonus images for your enjoyment: 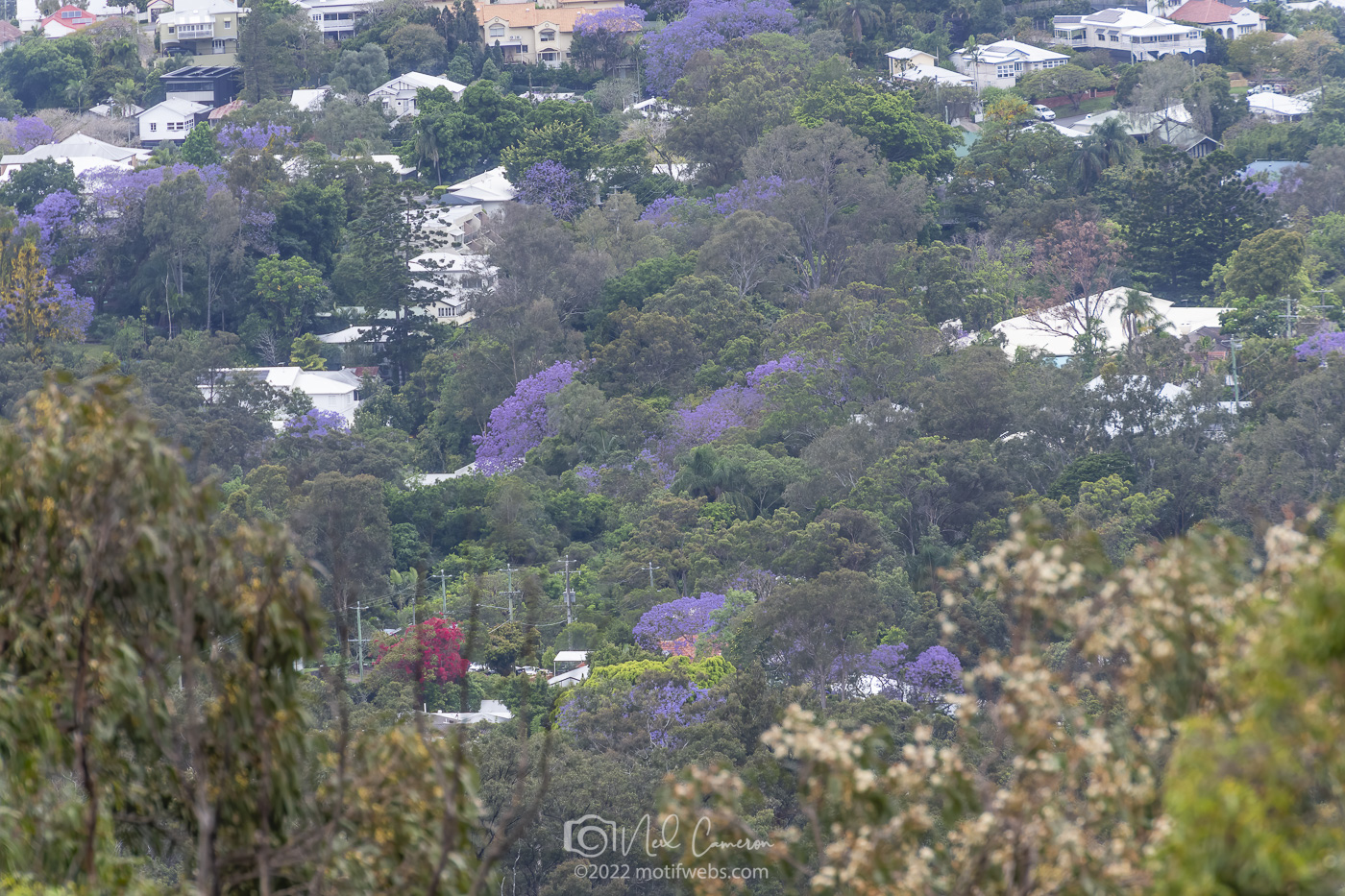 Jacarandas in a Brisbane suburb 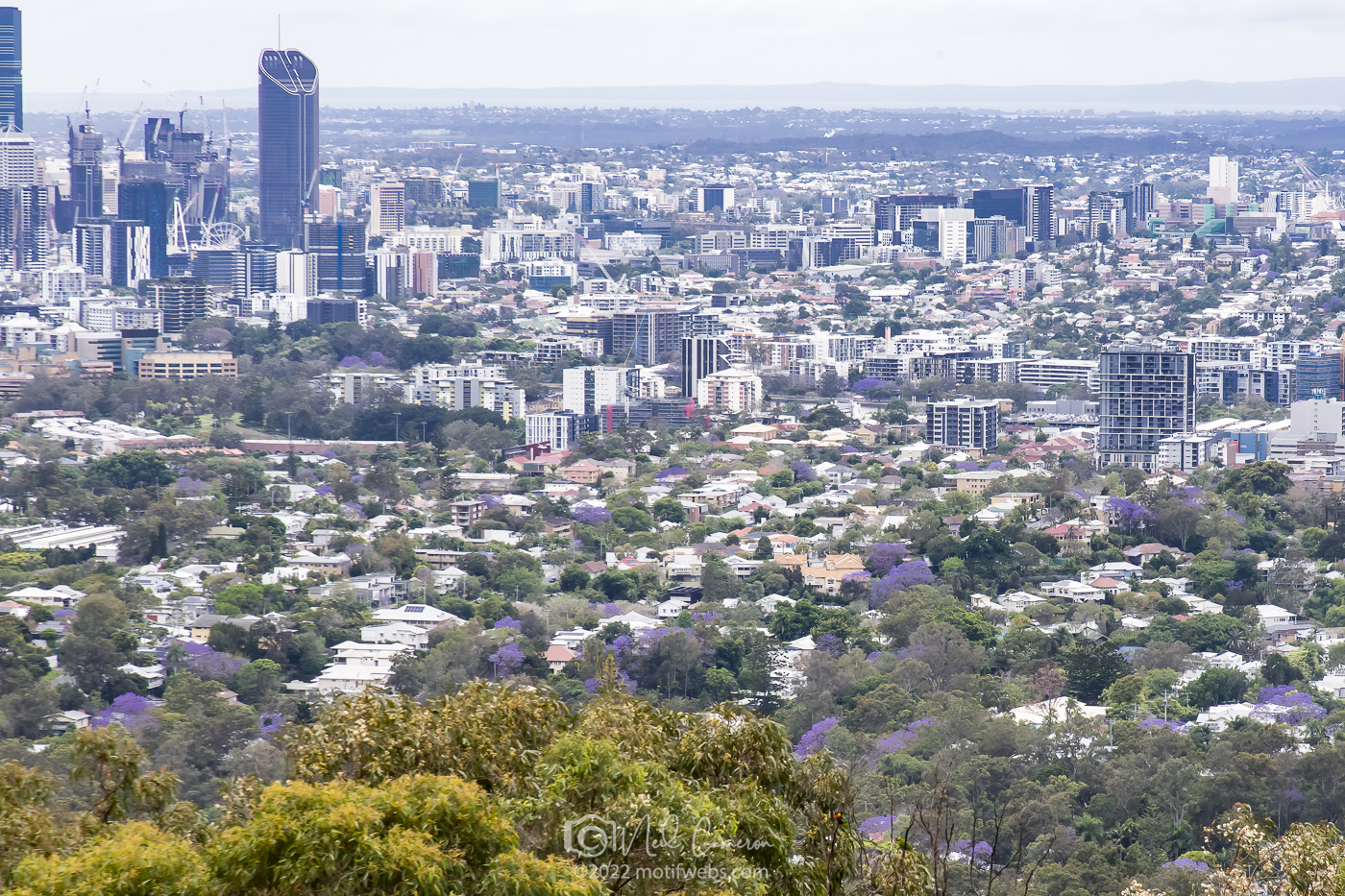 Jacarandas scattered throughout the Brisbane suburbs 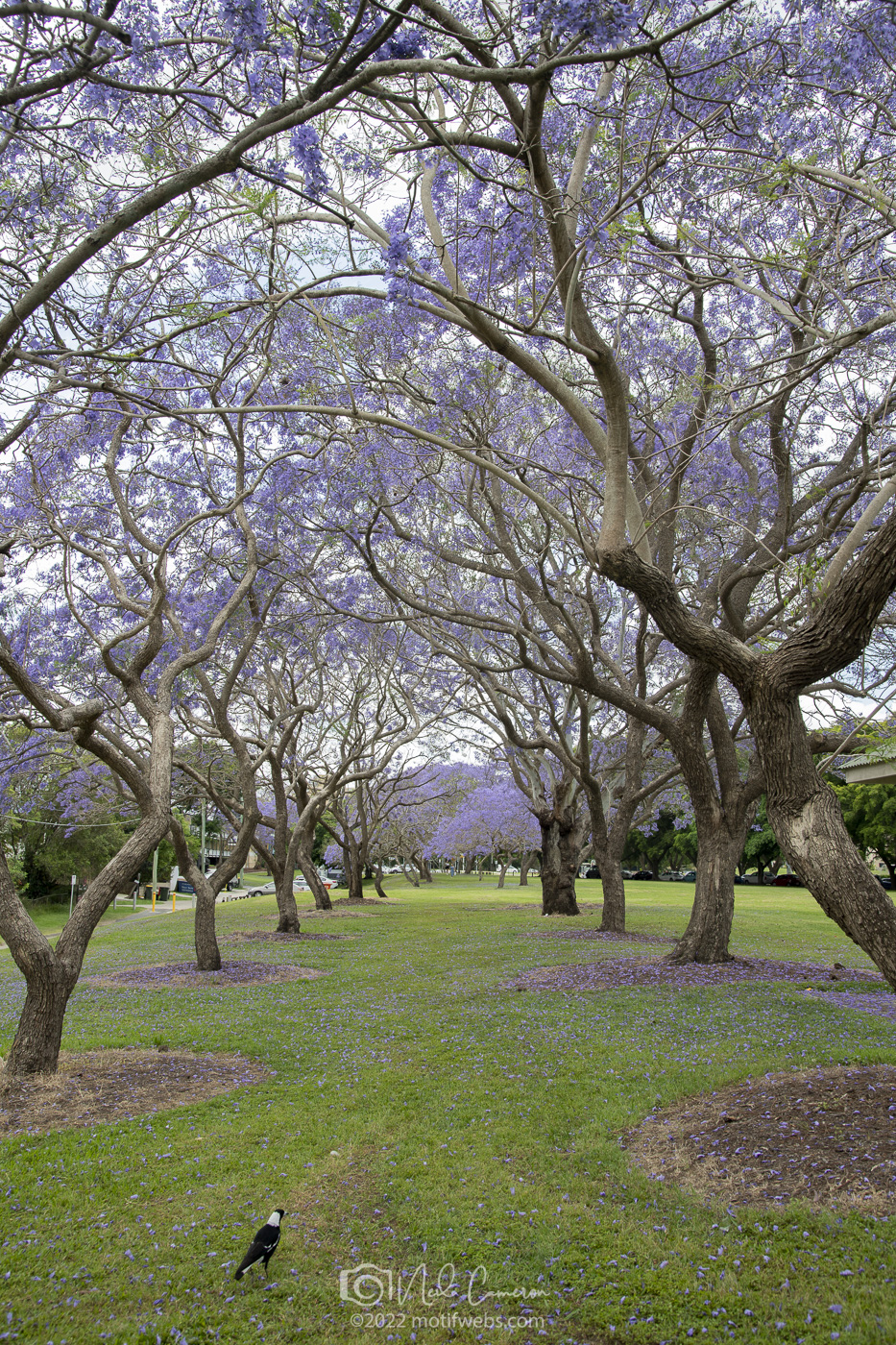 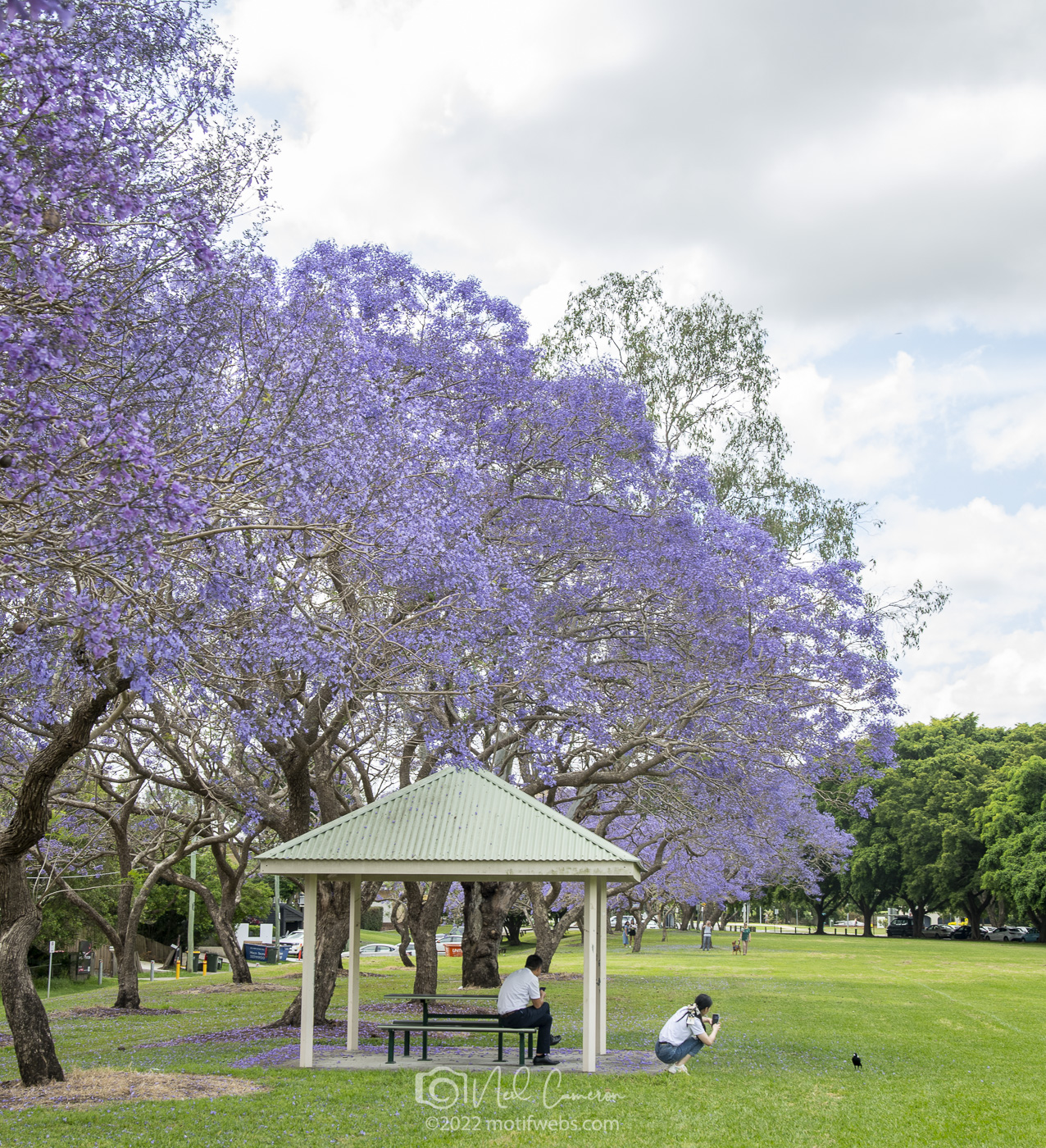 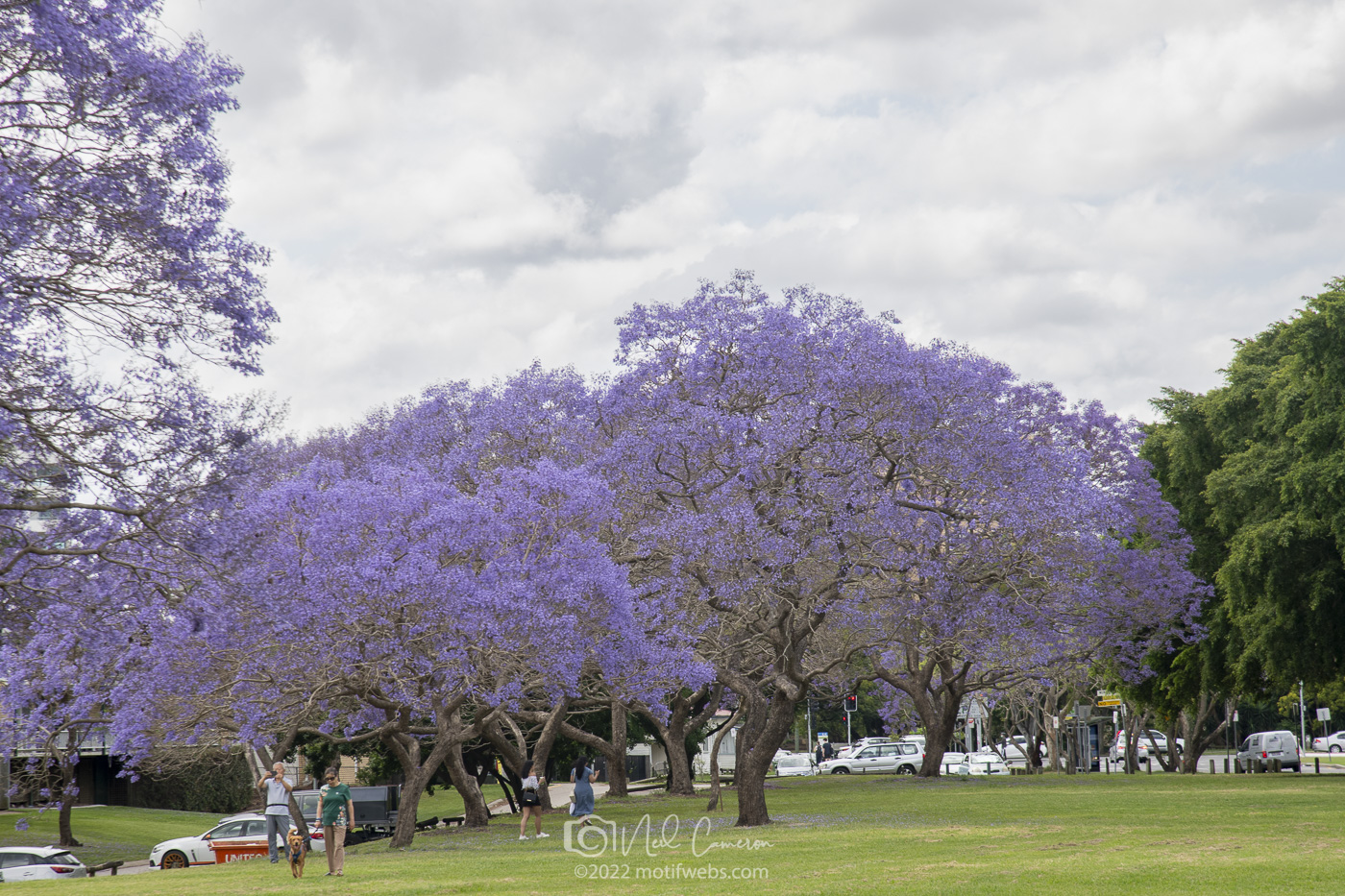 Jacarandas under a cloudy sky 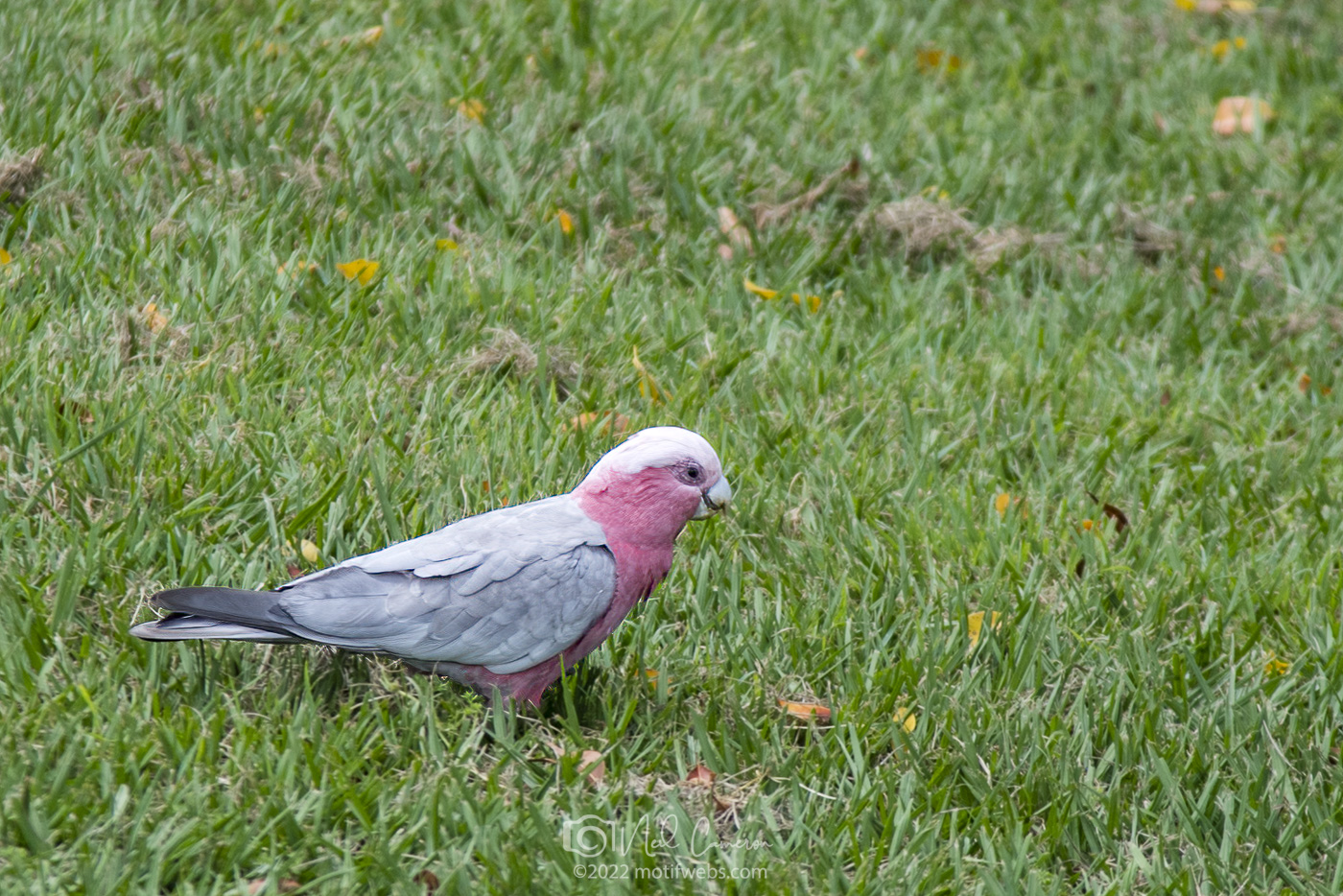 Your humble photographer wasn't the only galah at William Dart Park, St Lucia 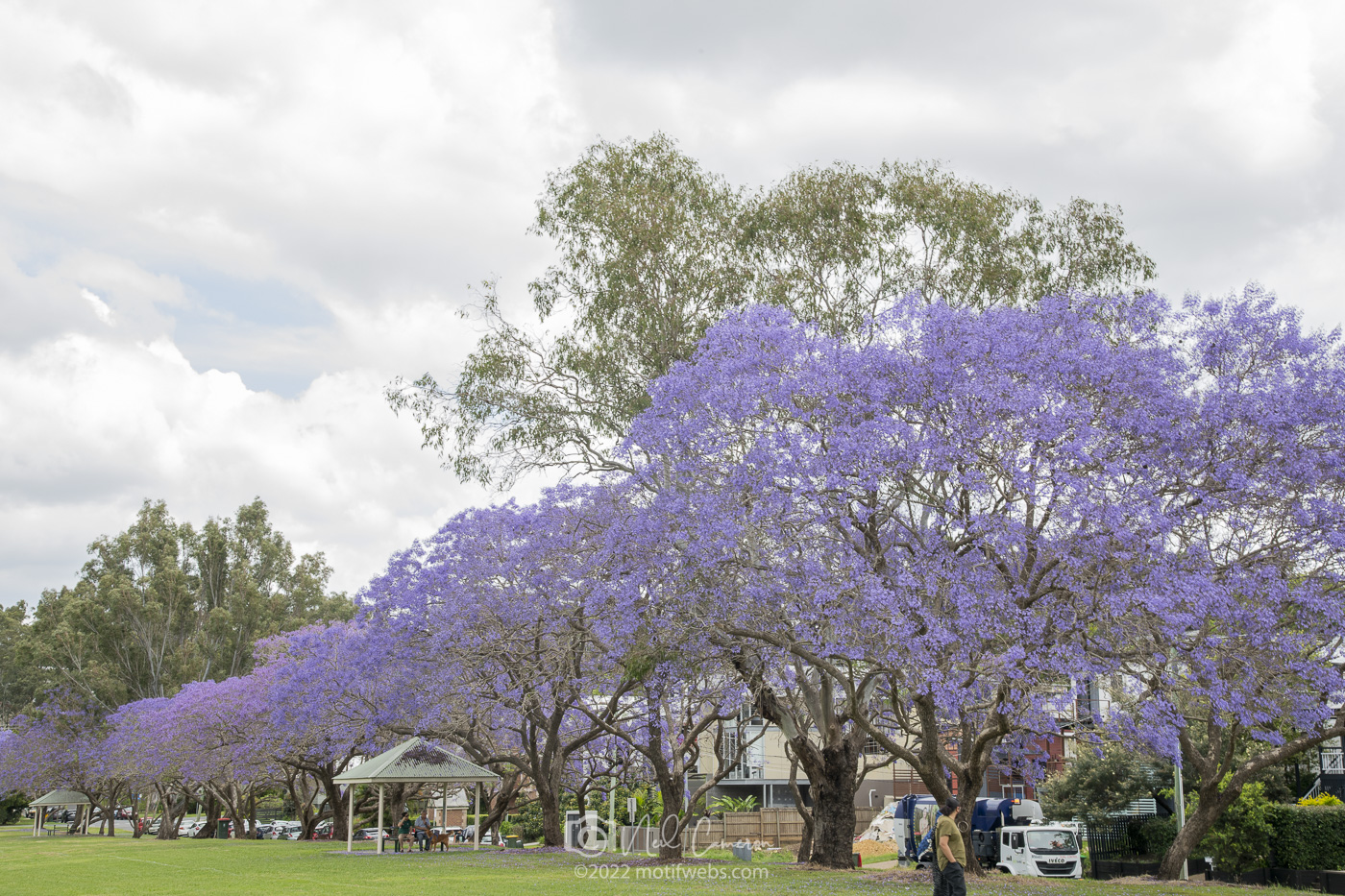 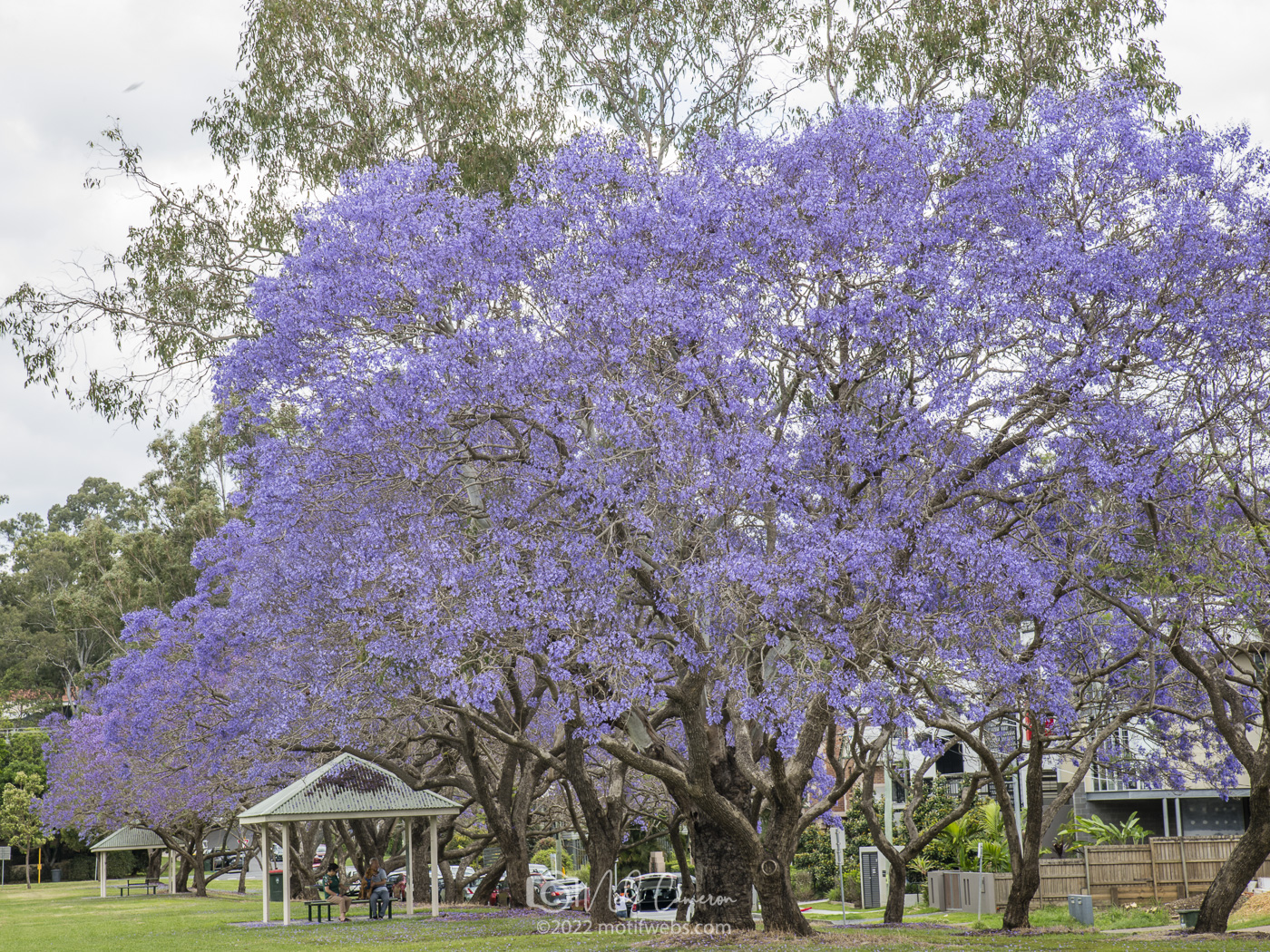