Birds, wildflowers, a butterfly and sunburn

The 26th of September was a beautiful, late spring day that just begged you to come outside and enjoy it. Who am I to resist such beckoning photographic conditions and I was determined to explore more of Archerfield Wetlands at Oxley here in Brisbane.

However, I did something downright stupid, I forgot to take a hat! So now I sit here with a scalp like Deadpool or Darth Vader's long lost brother. Not a pretty sight. Still, it was worth it.

Anyway, before that came to pass, I set off from the car with bright-eyed eagerness. On my one previous visit I had just explored the parklands beside and around the trailhead. This time I would focus on hiking the trail itself, or at least part of it. Not that at 2.9km one way it's particularly long, but in the end due to sun stress and current lack of health, I only managed about 1.3km along before turning back. I will need to go back!

On starting out on the concrete path that forms the beginning of the trail, later to turn to gravel, I immediately encountered a pair of kookaburras (Dacelo novaeguineae) with this one flying across the path to perch in a large fig tree in the aforementioned parkland. 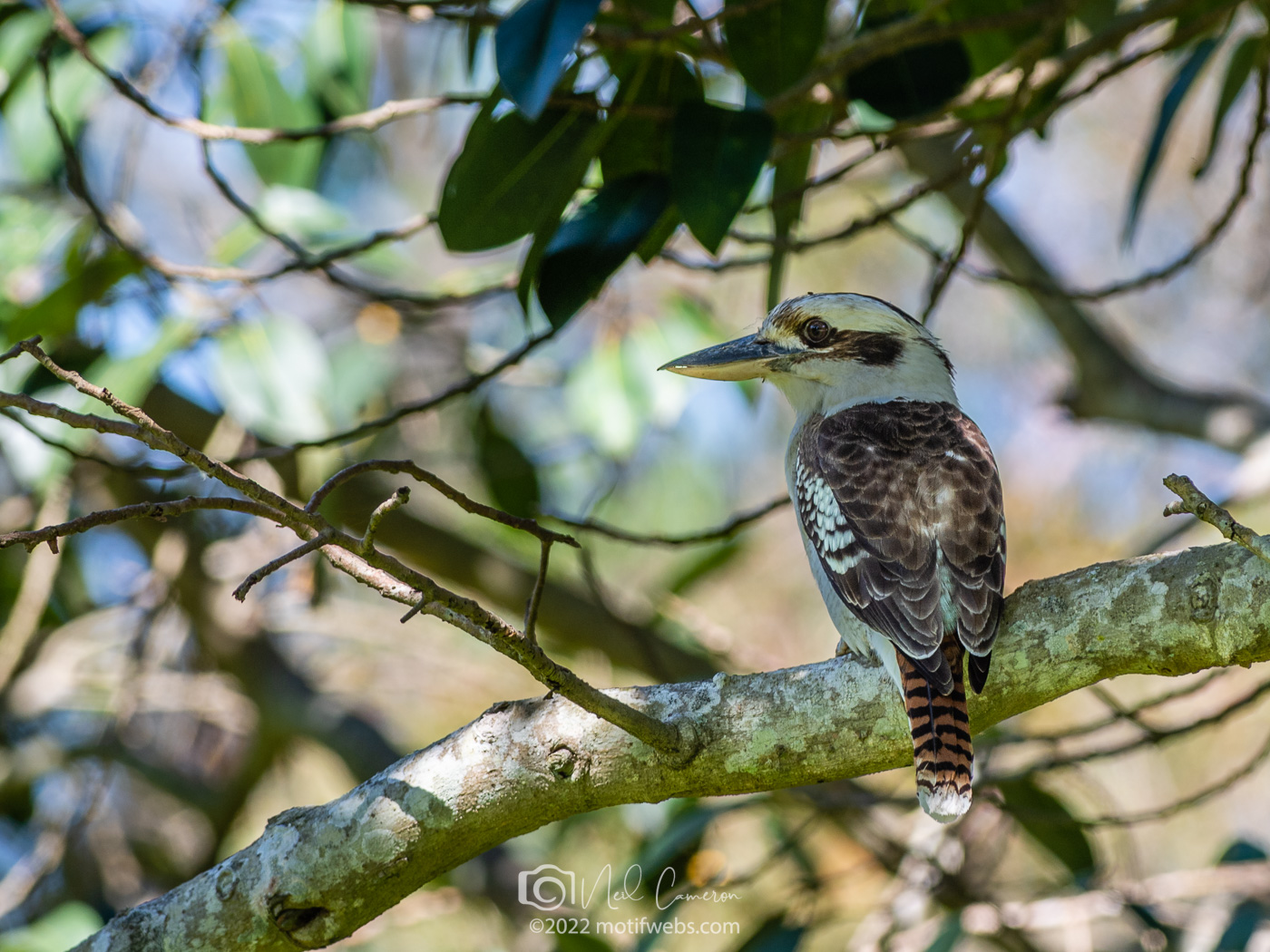 I had also decided that today was to be about more than just birds. With that in mind there were abundant patches of wildflowers. Sadly, most, like this Billy Goat Weed (Ageratum conyzoides), are exotic, invasive weeds. 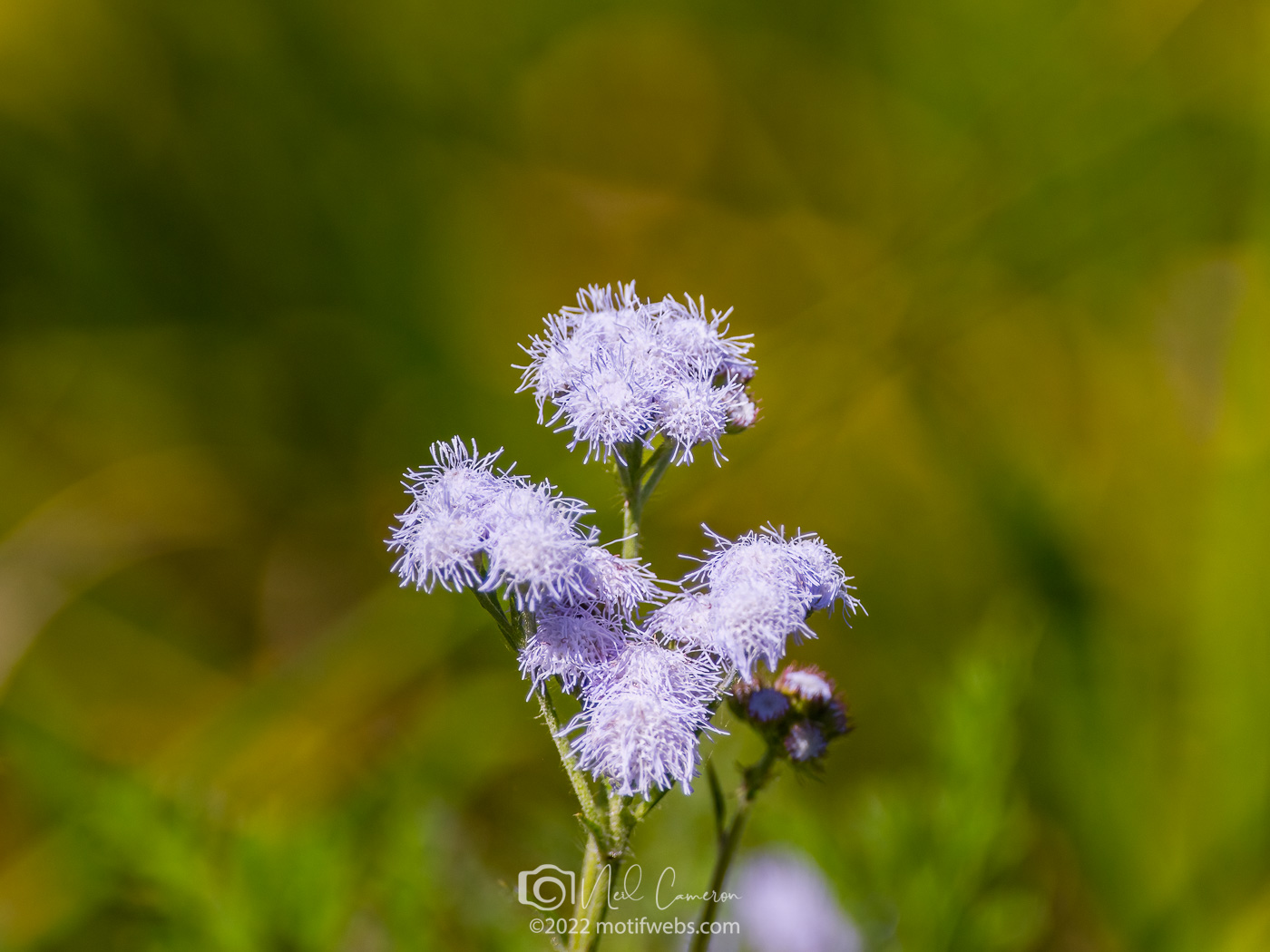 Right beside the path was this Australian Magpie (Gymnorhina tibicen). He was completely fearless and far more interested in chasing down and eating bugs than paying attention to a passing decrepit, reprobate photographer. 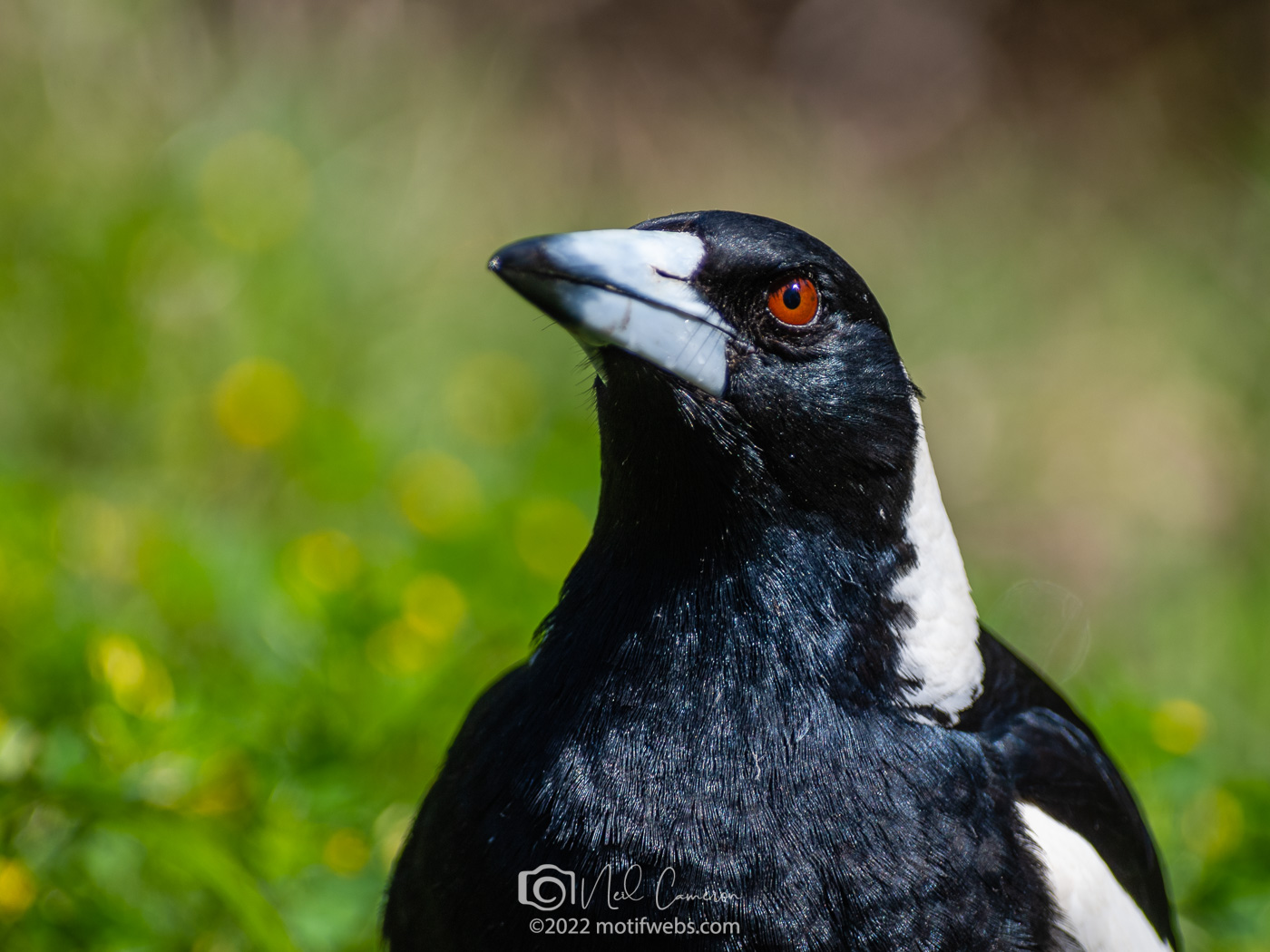 Up Close & Personal with Australian Magpie

In the same spot, but the other side of the fence (I had to manoeuvre around the maggie to get a shot) this Monarch (aka Wanderer) butterfly (Danaus plexippus) posed nicely. 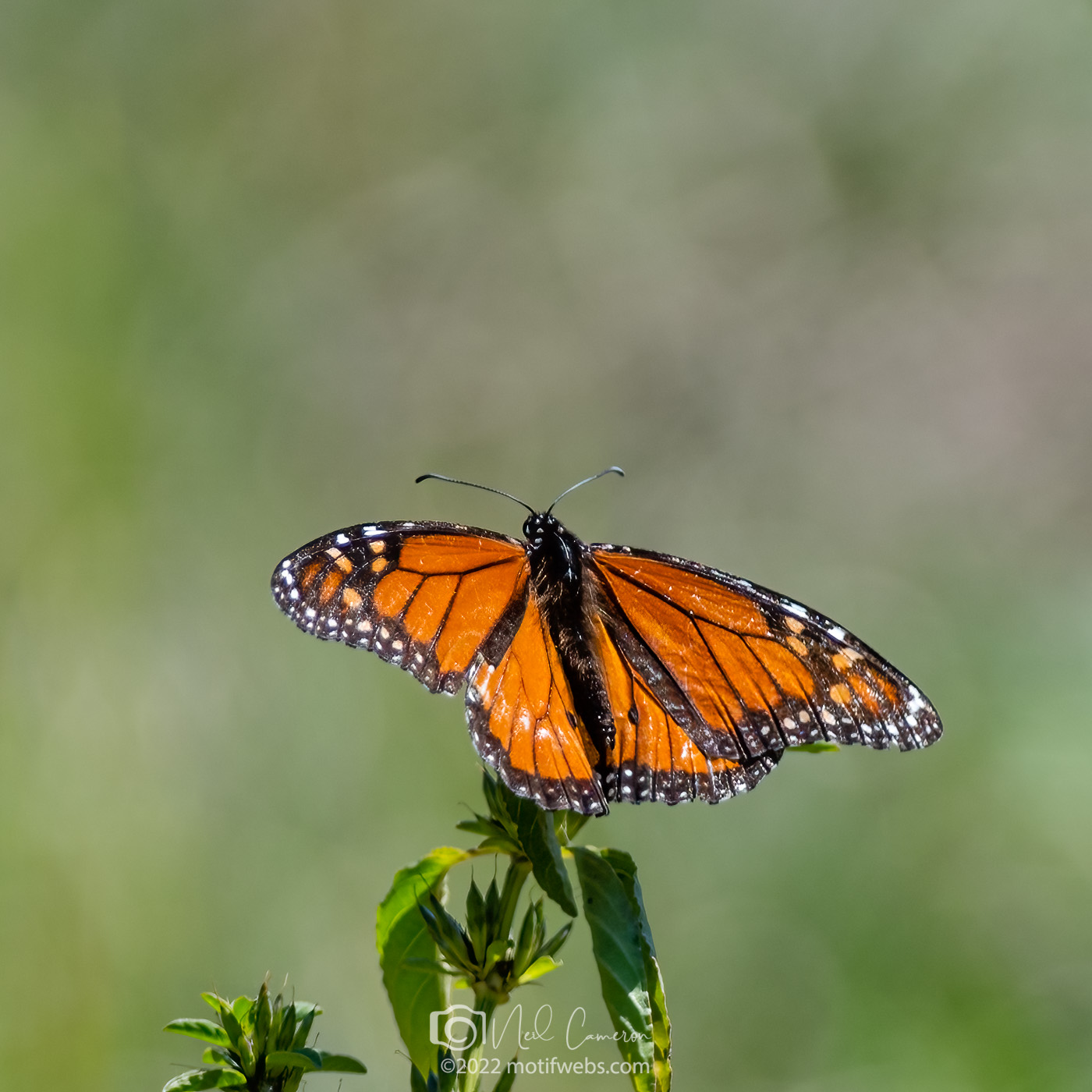 About a hundred metres or thereabouts further on from the magpie and butterfly I got a pleasant surprise when I realised that the birds flitting to and fro from the branches of the dead tree up ahead were a pair of Rainbow Bee-eaters (Lonchura punctulata). The male is the one with the longer tail 'streamers'. 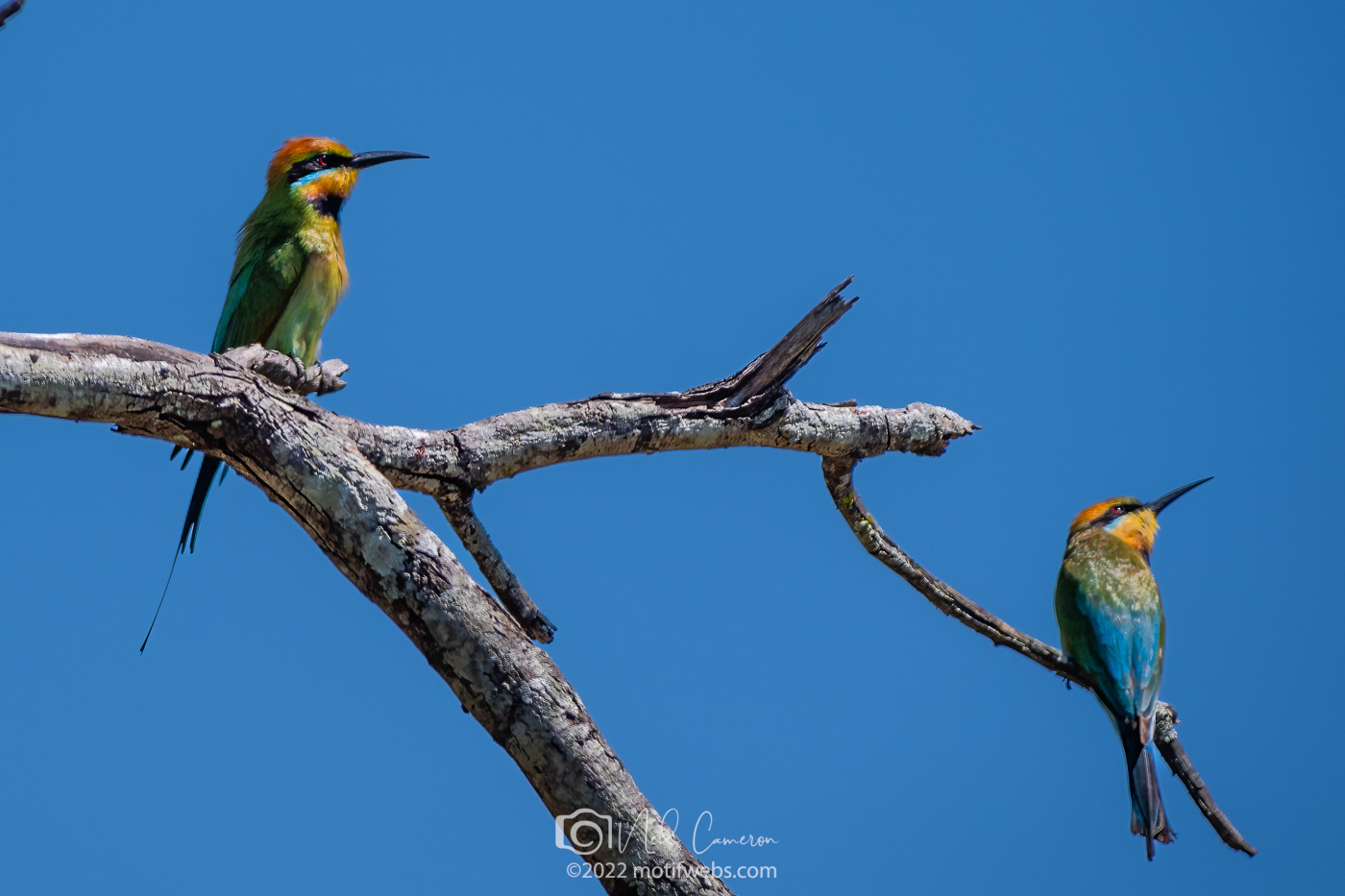 They are spectacularly coloured and a favourite of many photographers. In fact they can be so popular that they cause queues at the best known Brisbane RBE photo hotspot, Sir John Chandler Park, Long Pocket.

You can see more photos of Rainbow Bee-eaters, all from Long Pocket, in this article I wrote about their beauty (opens in a new tab).

Shortly thereafter, I encountered my first patch of another invasive plant. This time it was Fireweed (Senecio madagascariensis). It may make for pretty wildflower scenes, but together with other imported escapee plants, such as the earlier Billy Goat Weed, they choke out the native vegetation. They can also lead to significant habitat changes resulting in those native birds and other wildlife that cannot eat the invasive plants being forced out and replaced by species better adapted. It is also worth noting that Fireweed is toxic to livestock (opens in a new tab). 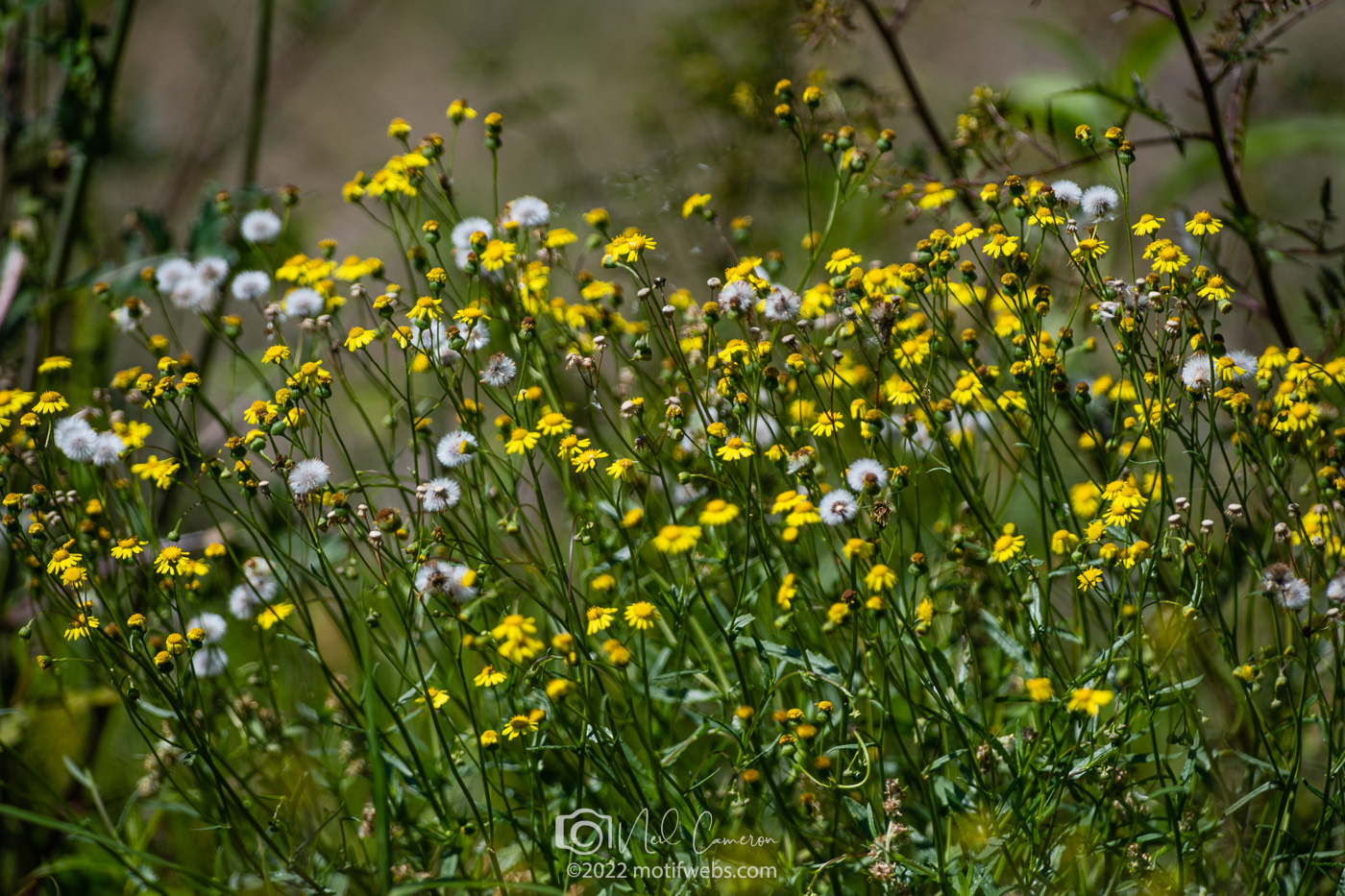 Despite strongly suspecting the pretty wildflowers were noxious weeds, it's hard to deny the photographer's desire. Nonetheless, after taking a few happy snaps, I continued my jaunt. It was now that I encountered the classic 'little brown bird' (LBB)!

LBBs are the bane of wildlife photographers everywhere. They tend to flit about; hide in trees, bushes, behind leaves and branches; generally make themselves difficult to get shots of and impossible to identify. In fact I wasn't able to ID these LBBs until I got home where I could zoom in easily to look at the images taken and had access to my books and reliable internet. The investigation (cue: CSI "Enhance!") showed they are Scaly-breasted Munias (Lonchura punctulata) also known as Nutmeg Mannikins. 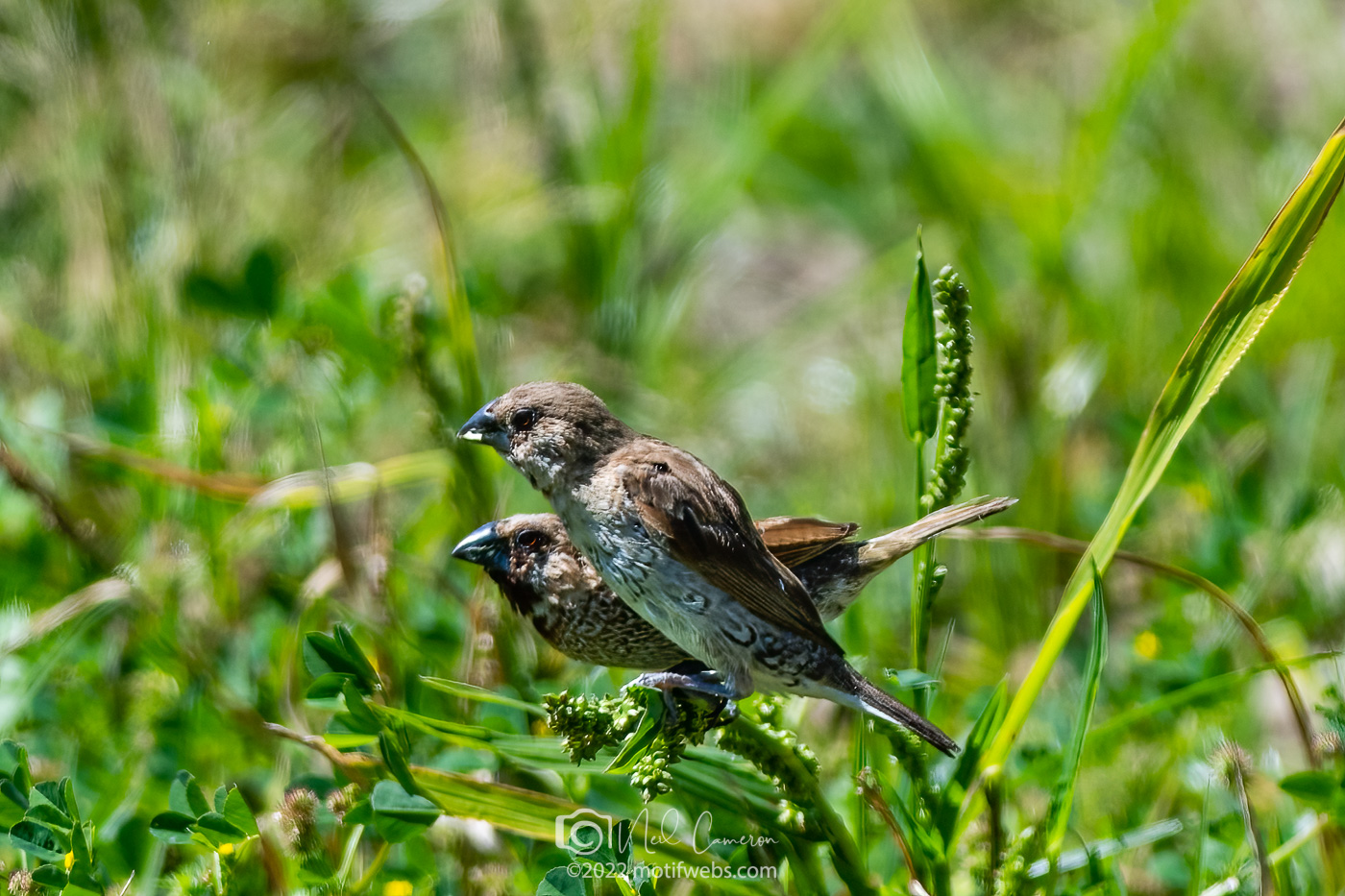 It is fair to say that they led me a merry dance.

I had first spotted a flock of about 10 - 20 birds flying from the ground up into a heavily leafed, small tree close by and then most headed deeper into the forest. I stayed in the same spot, literally the other side of the track from where I had found the Rainbow Bee-eaters, for 10 or so minutes, but without much luck. It looked like I had spooked them and they had abandoned that location.

However, just as I was about to give up, I got lucky and the munias became braver. I managed to get some reasonable shots of the pair above, although I wasn't best positioned with regards to the light. Still, I'll take what I can get to capture images of a 'lifer', i.e. the first time I've ever seen this particular species. Then as I moved back across the track to pay attention again to the bee-eaters, I noticed this one on the wire who seemed quite curious about me. It's nice when they're so obliging, especially after my initial thoughts had been that at best all I could be content with were some messy, subpar "record shots" of them in the leafy little tree. 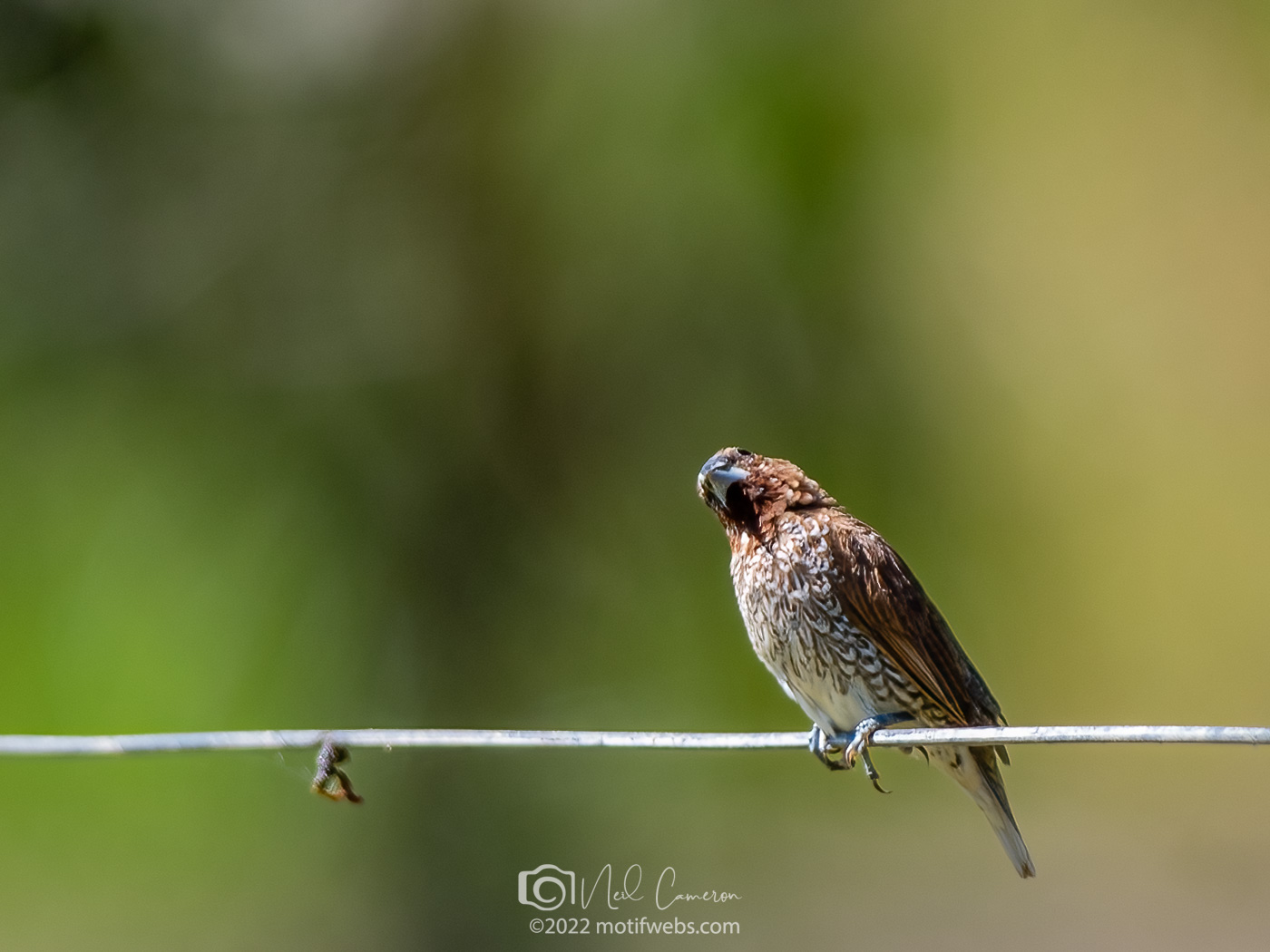 I find the unusual scale pattern effect on their chests to be fascinating. It brings to mind a form of medieval armour.

So ever onward I ventured and came to a large pond, semi-choked by reeds. Here a pair of Australian White Ibis (Threskiornis molucca) had set up nesting. They more commonly nest up in trees, but it's not completely unusual to find them nesting down low like this. 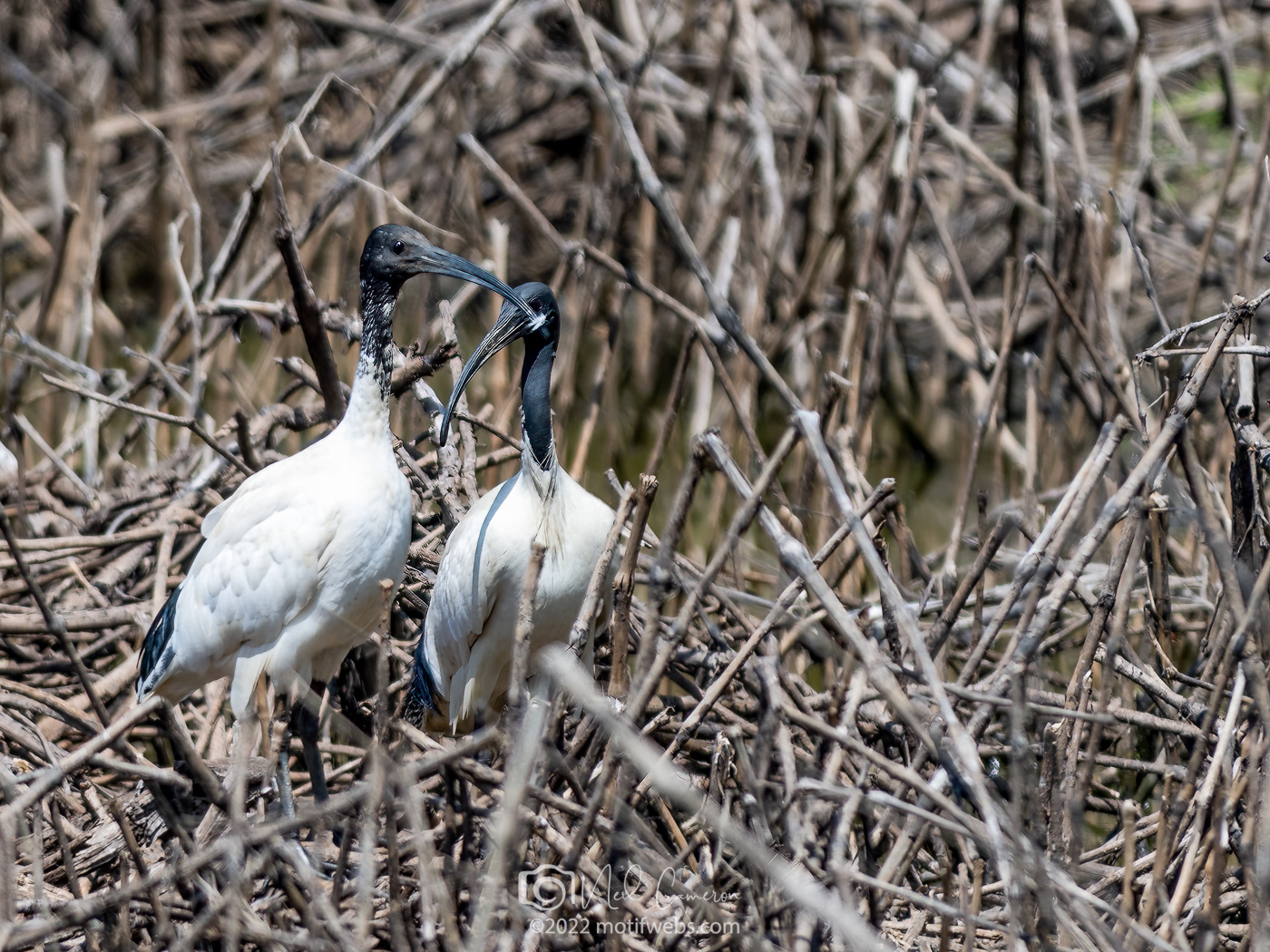 Also present on the pond were Pacific Black Duck (Anas superciliosa), Australian Wood Ducks (Chenonetta jubata), and a lone White-faced Heron (Egretta novaehollandiae). Sadly, none of them provided useful shots, but then again they are common birds and I can get images of those at almost any time.

While I was trying to photograph the too-distant White-faced Heron, I noticed out of the corner of my eye a small bird flitting from the reeds to a small tree. It was a male Superb Fairywren (Malurus cyaneus) and it then flew across the track, but too fast for me to get a shot of it. However, I did manage to see the area it landed in. So over to the fence on that side of the track I went; determined to track him down.

Much to my surprise, a female was the first to appear. She wasn't still for long , but I managed a couple of shots with this being the best. 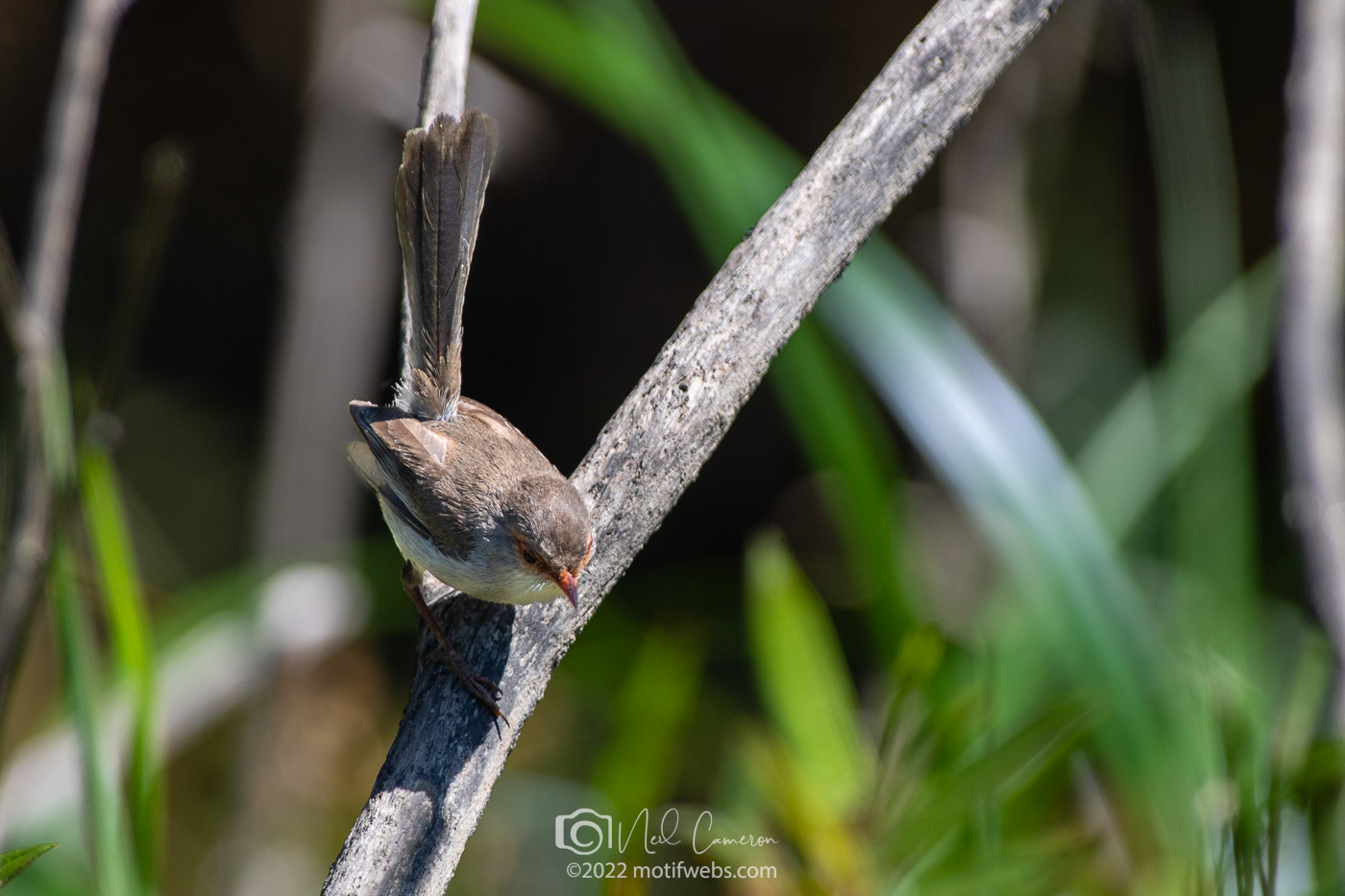 The lady then dived down into the nearby thick undergrowth of mainly grasses. Observation showed that this was most likely their nest's location. 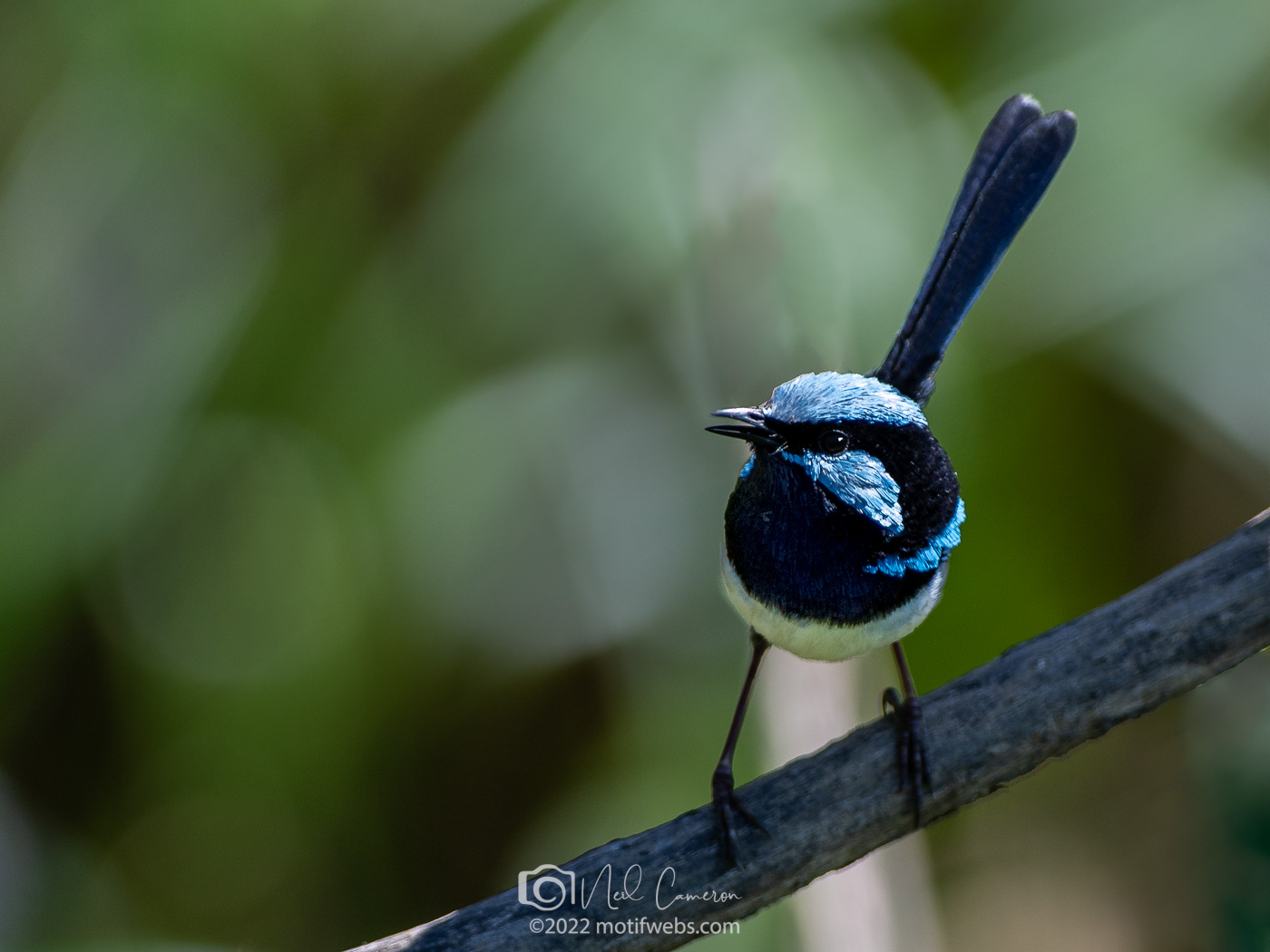 He turned out to be surprisingly cooperative and posed numerous times on the bare branches of the same shrub the female had been on. Yet again the angle of the bird against the prevailing light was not ideal, but such a striking bird can pose however he wants. It's up to me to make the best of it. How did I do? 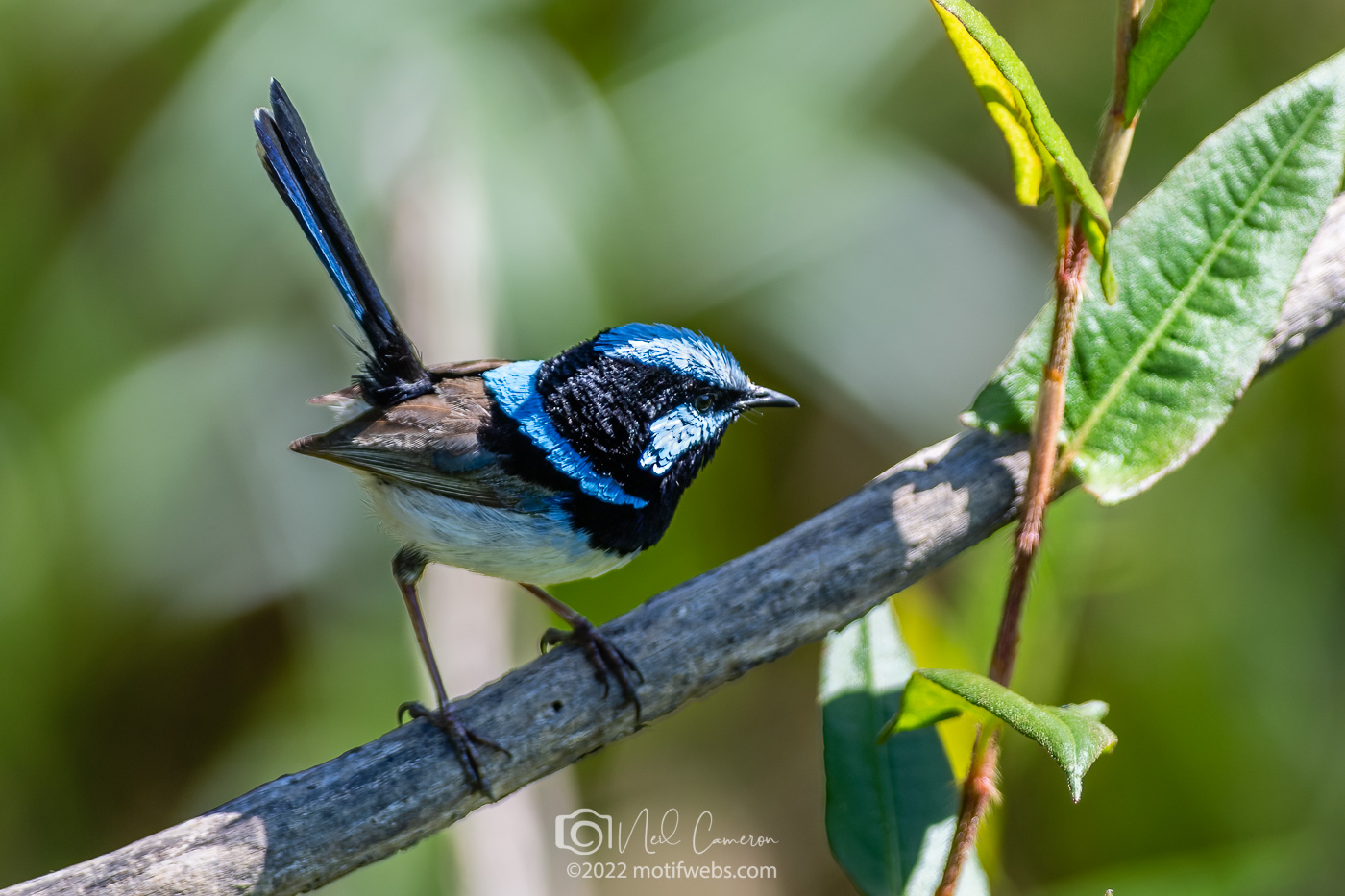 After thoroughly enjoying this lovely bird's display and when he had adjourned to the nest, I moved on.

Next was yet another 'pretty', but invasive exotic weed, Lantana (Lantana camaria L.). Originally from the Americas, it is a "Weed of National Significance" (no, I didn't make that up) that has spread from gardens. You can read more about it here (opens in a new tab). 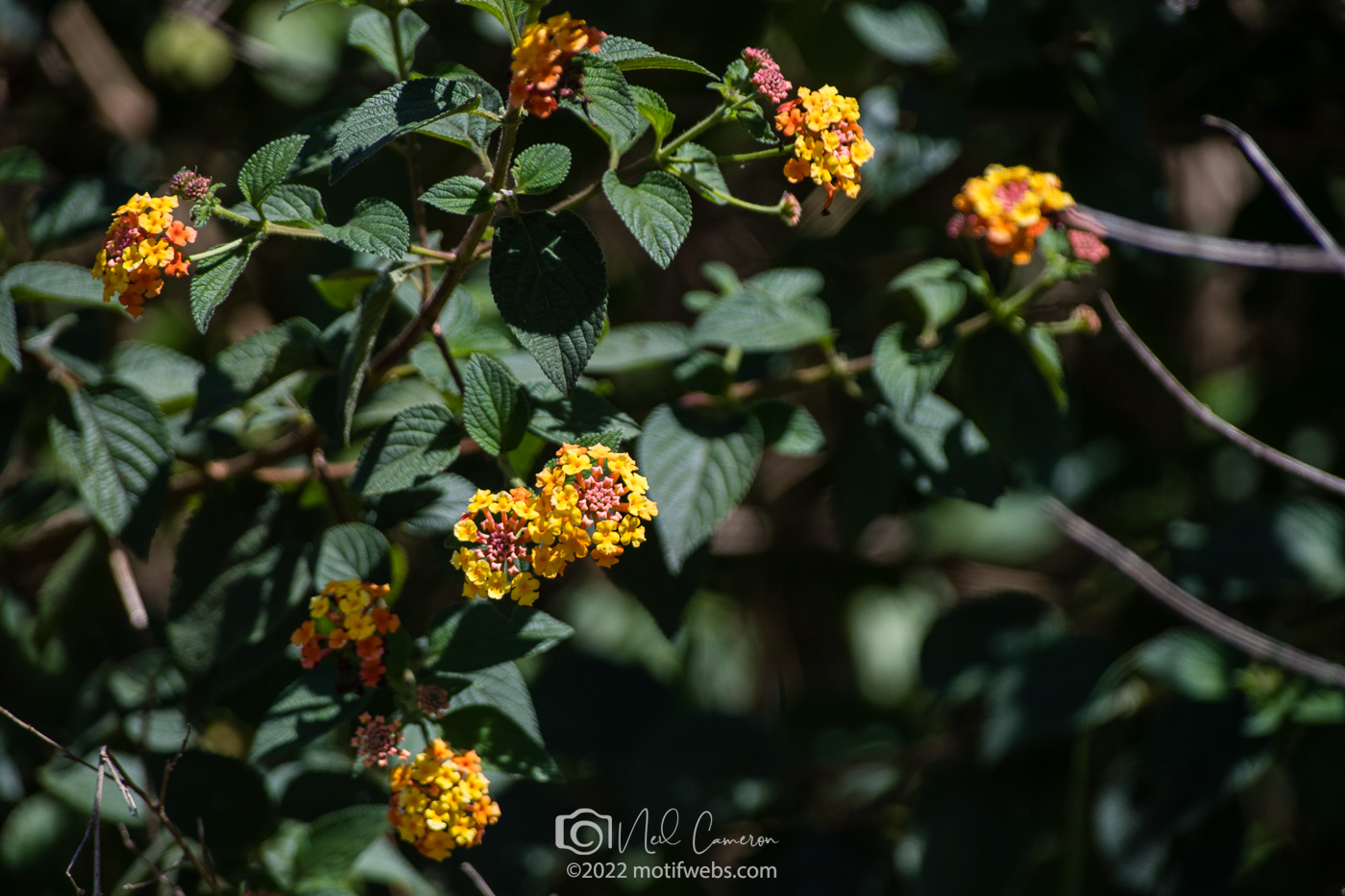 Archerfield Wetlands really did throw up some pretty patches of wildflowers. Just a shame that I hadn't knowingly encountered any native ones yet.

Oh well, I pushed on, but knew that the sun and my lack of a hat was starting to get to me. I doubted I would be able to get much further, especially knowing that I had to turn around and head all the way back. However, the Superb fairywrens had provided some impetus towards seeing what else I could find and only slightly further down the track, not far past the Lantana, I spotted a male Red-backed Fairywren (Malurus melanocephalus).

He was very active and clearly intent on being where ever I wasn't! He seemed to have drawn a zone of exclusion around me of about 20m radius and that was his boundary. Eventually, I got lucky. I watched him fly down to the track and pick something up. I assumed he had caught a bug and I fired off some shots of him on the ground even though the distance was really too far to be particularly useful. And then he took off. 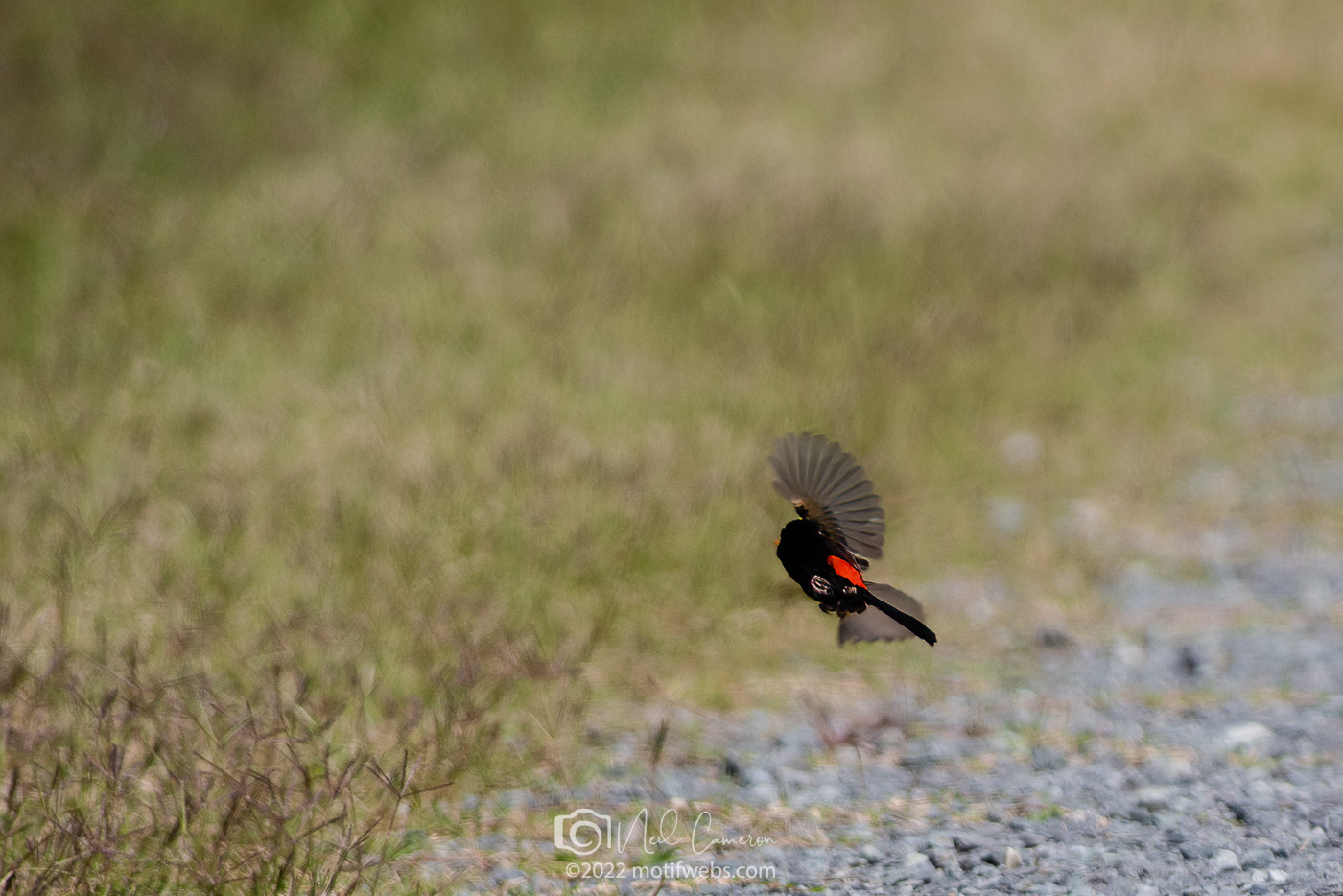 Not the greatest shot, but I like it for the action and abstraction.

Then I got a little bit more luck as he settled for a bit in a small tree on the edge of another largish pond/marsh right near the fence at the side of the track. Of course, it was a very leafy little tree, with many, many annoying, obscuring little branches. Still, he stayed there long enough that I was able to get some shots of him only obscured by a the one annoying thin branch.

Oh, and remember that "bug" he had picked up? Looks like it was actually flower petal; possibly from the Lantana. I wonder if it was a courting gift. 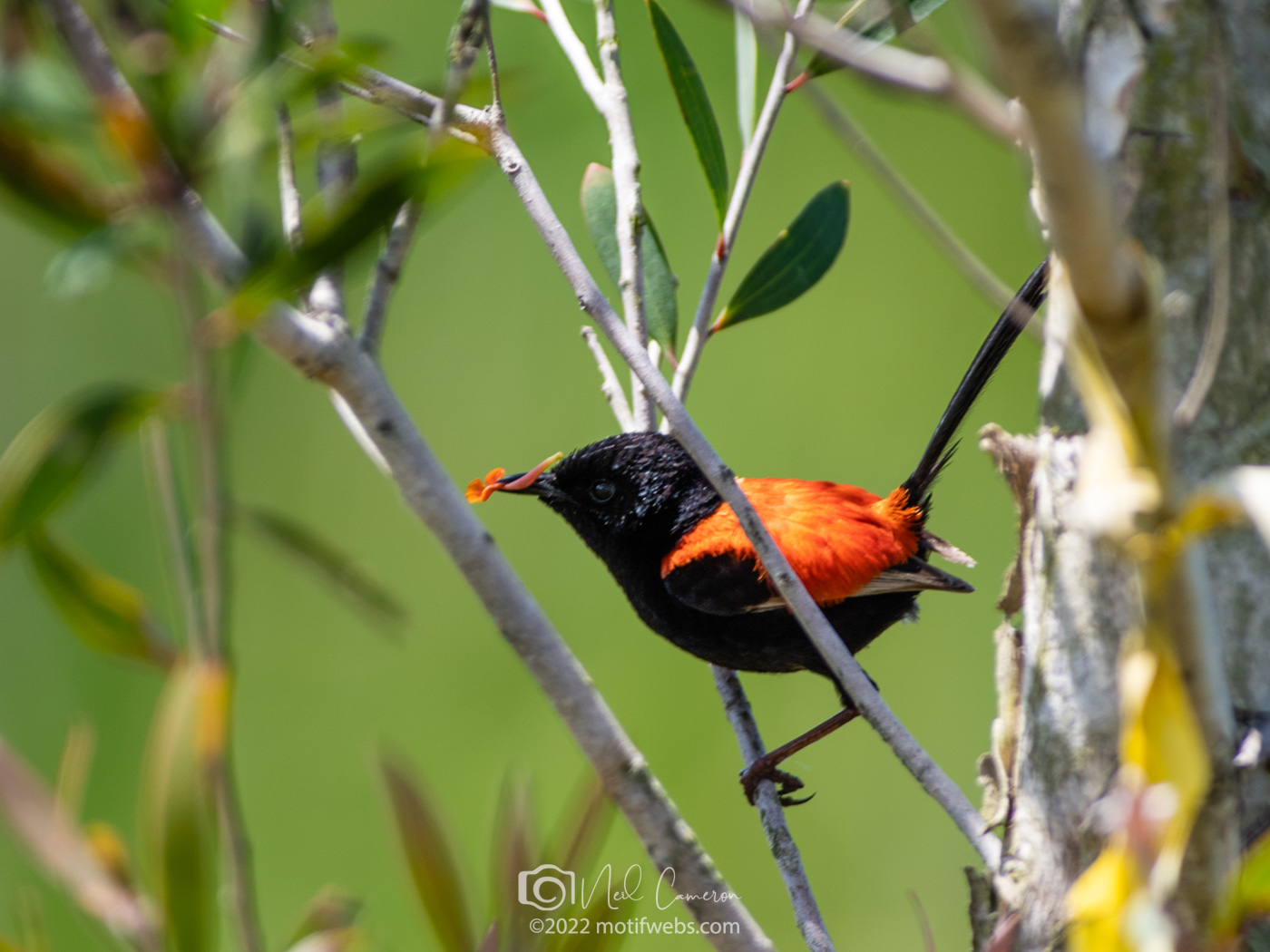 Shortly thereafter he flew back across the track and the last I saw of him was pursuing a female deeper into the trees by the creek.

Now I knew that I was done and it was time to head back. So, as the White-faced Heron (Egretta novaehollandiae) flew off to destinations unknown, I turned around and began the trudge back to where the car was parked. 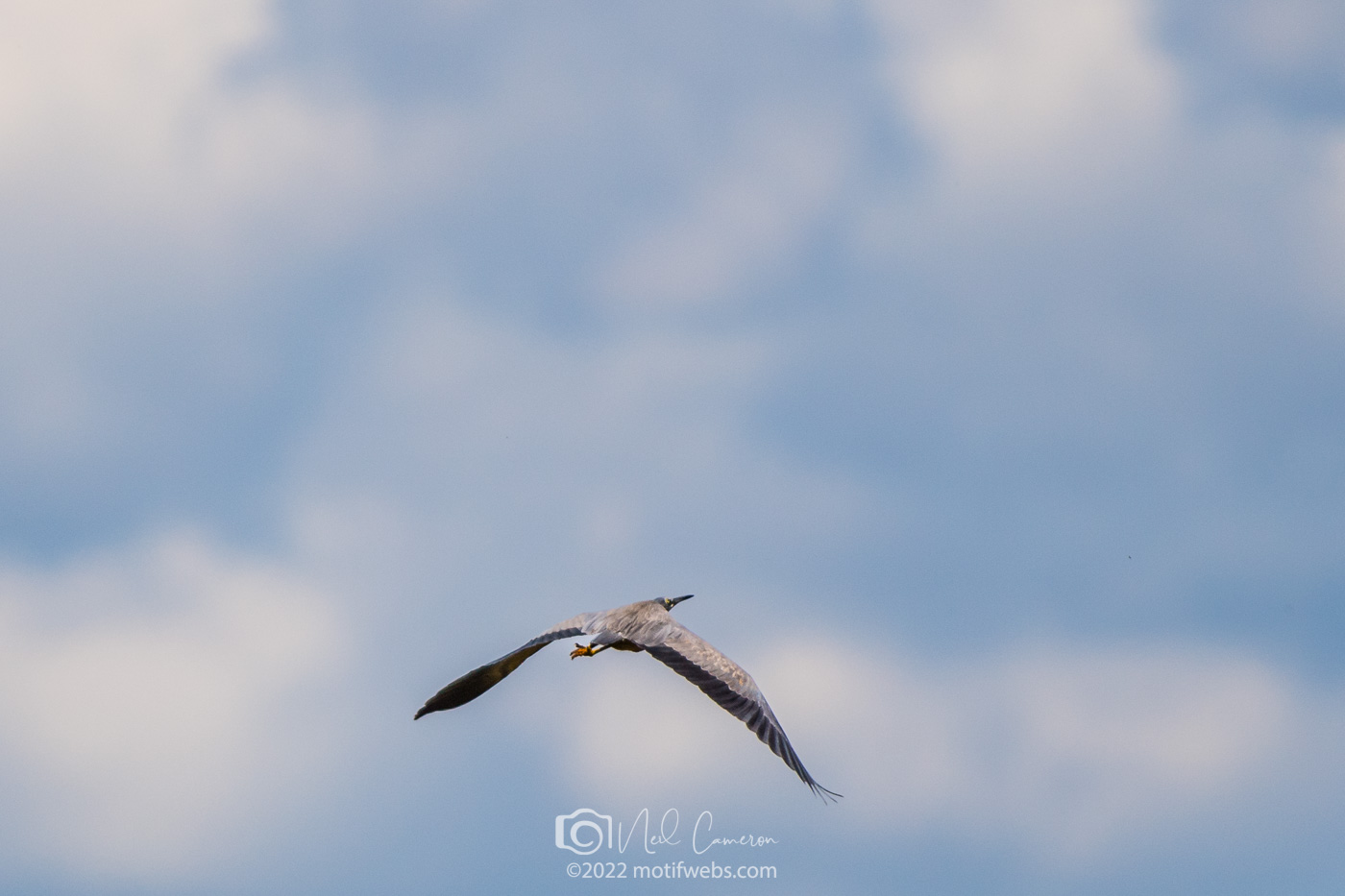 There was one last wildflower to shoot on the way back. A salute to my Scottish heritage, this Scotch Thistle (Onopordum acanthium L.) in full, classic heraldic bloom. And yes, it is of course another invasive pest. 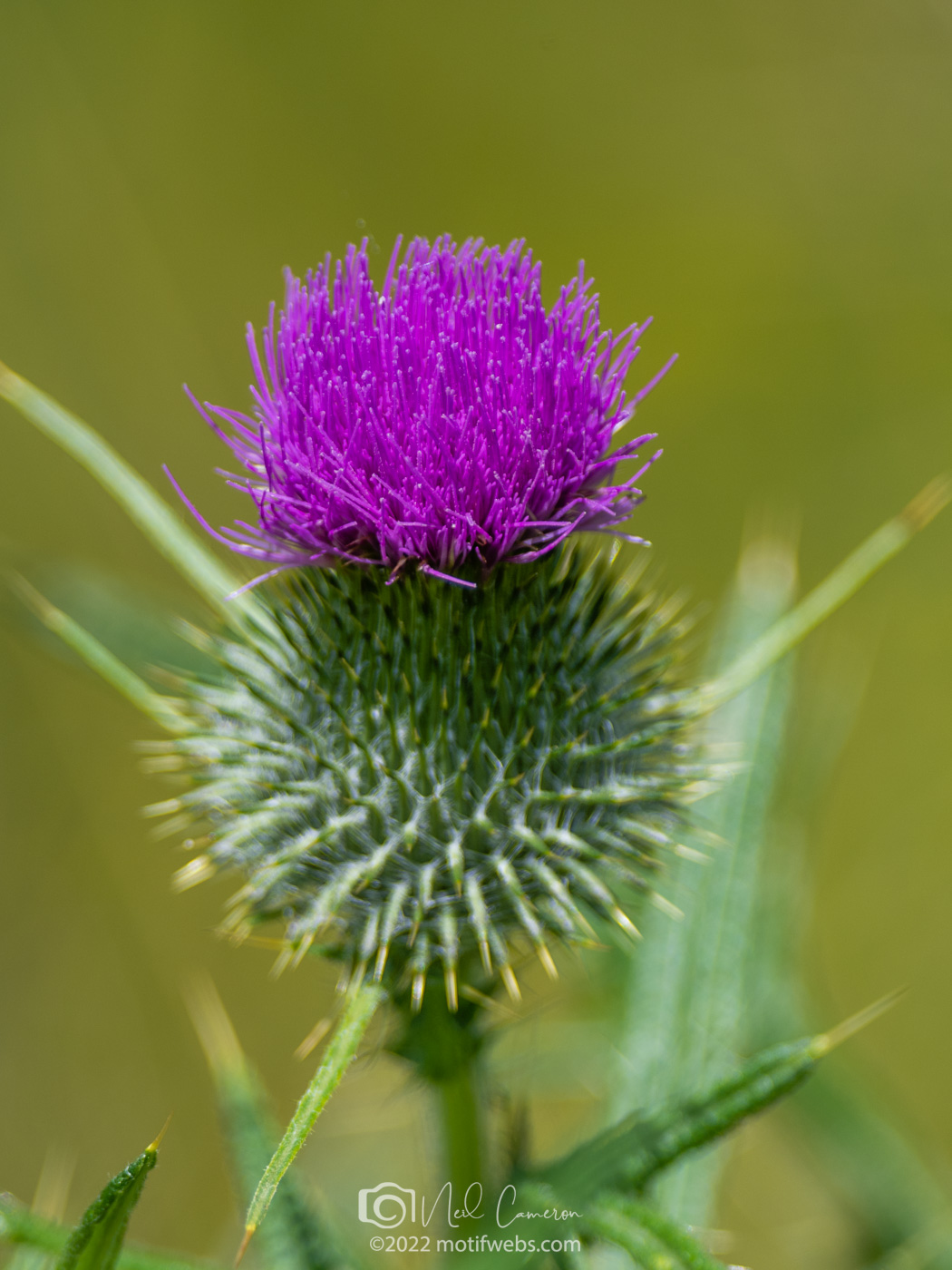 Overall, despite basically suffering from sunstroke by the time I got home, I can thoroughly recommend the trail - especially if you like colourful birds.

The blue track on the satellite view shows the route I took, while the red X shows where I should have gotten to. Nor does that include the short detour that can be made to the Wetlands Lookout (the yellow X). 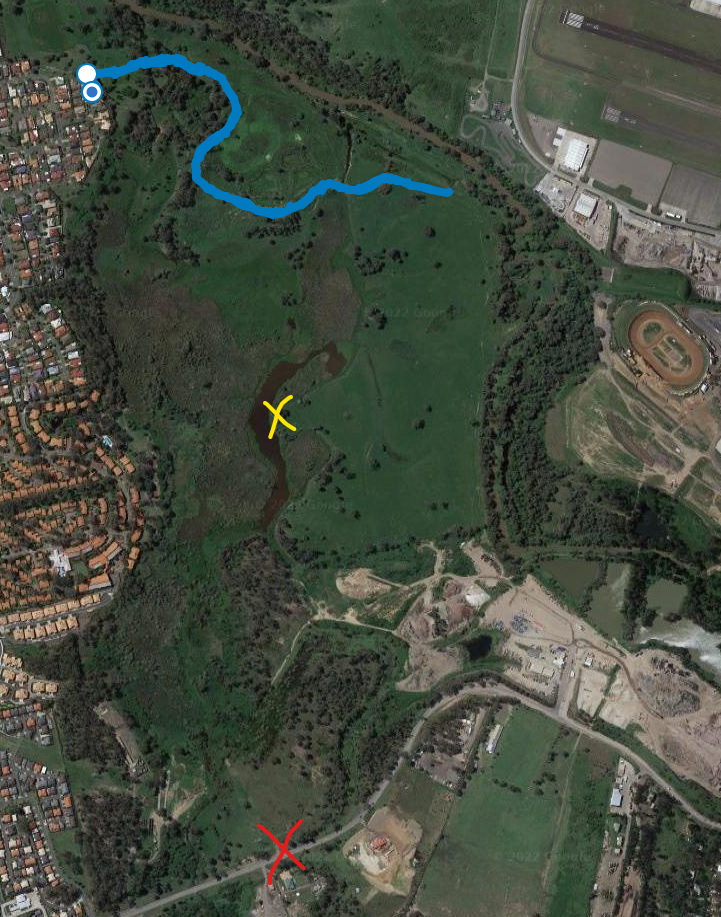 You can find out more about the Archerfield Wetlands here (opens in a new tab) including a simplified map.

Now to get back there, with a hat of course, and do the full course!